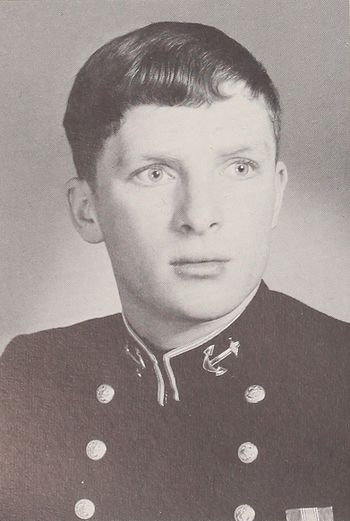 Kevin Connors, a hearty draft of Irish brew, while not always considered officer timber, quickly removed all doubt when he threw his hat into the ring of dynamic devil-doers. A Harvard Intellect, biting wit and bevy of cogent-minded associates brought to the Naval Academy new frontiers of human derring-do. A close association with executive circles and local authorities enabled this pioneer of thought and deed to wrest from the ivy-clad traditionalists unequaled heights of personal discipline. Often a dark horse in the academic campaign, he time and time again left professor and peer alike breathless in amazement at his wizardry in the world of arts and letters.

Kevin Connors, a hearty draft of Irish brew, while not always considered officer timber, quickly removed all doubt when he threw his hat into the ring of dynamic devil-doers. A Harvard Intellect, biting wit and bevy of cogent-minded associates brought to the Naval Academy new frontiers of human derring-do. A close association with executive circles and local authorities enabled this pioneer of thought and deed to wrest from the ivy-clad traditionalists unequaled heights of personal discipline. Often a dark horse in the academic campaign, he time and time again left professor and peer alike breathless in amazement at his wizardry in the world of arts and letters.

Though he is included on this website, Kevin was not on active military duty the morning of September 11, 2001, and is not listed in Memorial Hall.

Kevin Connors seemed invincible to all who knew him.

His leadership and flair for life made it all the more difficult for his family to accept that the 55-year-old former Quincy resident died in the terrorist attack on the World Trade Center on Sept. 11.

“Mentally and physically he was a very disciplined and intelligent person,” said his brother Russell.

A senior vice president for Euro Brokers Inc., Connors was working on the 84th floor of the World Trade Center south tower when the north tower was hit.

He had sent his brother Christopher an E-mail at 8:40 a.m. from his office computer making plans to talk later that day.

The family now treasures that E-mail, said his sister Sheila LeDuc of Lexington. It is also how the family knows that he was in the building when it was hit.

Connors made sure to stay in close contact with his siblings after his mother, Dorothy, died last year, said LeDuc. His father, William Francis, died four years ago. The family held a one-year memorial service for their mother this weekend, the event made all the more difficult by the absence of Kevin.

“In the past year he had the good sense to learn how fragile life is and how none of us will be around forever. Kevin took advantage of that and kept in close touch with each of us throughout the past year. In light of that, what a blessing,” Sheila said.

Connors was born in Boston and moved to Wollaston shortly thereafter. He was the oldest of five boys. He also had a sister. The family lived at 38 Ellington Road for several years before moving to 77 Adams Place in Quincy.

Connors attended the Massachusetts Fields School and St. Ann’s Elementary School in Quincy. He graduated from Boston College High School and was nominated by President John Kennedy to attend the U.S. Naval Academy. After graduating in 1969, he was commissioned as an ensign in the Navy. He earned an MBA from the Tuck School of Business at Dartmouth College.

He always had a keen business and financial sense, and he followed his dream to work in the New York financial markets. His brother Russell, of Kittery Point, Maine, said the leadership skills his brother learned at Annapolis served him well throughout his business career.

After getting his MBA, Connors moved to New York and worked for J.P. Morgan. He also was executive director of Morgan Stanley, where he established the company’s government bond department.

After several years with Morgan Stanley, he moved to Miami and founded his own investment firm, Connors & Cook. He later sold the business and established Kevin Connors and Co.

Connors returned to New York three years ago to work for Euro Brokers Inc. He lived in Greenwich, Connecticut, with his wife, two children and three stepchildren.

When not at work, he enjoyed sports, including sailing. In 1975 he, a brother and a friend survived the sinking of his 66-foot schooner off South America. They spent two days in a life raft before a cargo ship rescued them. After that, he canceled his planned trip around the world to return to Wall Street.

In July, he finished a 550-mile bike race across Iowa.

In addition to his brother Russell and sister, Sheila, he is survived by his wife, Sylvia (Loria) Connors; two sons, Shane, 20, and Terrence, 12, of Greenwich; three stepchildren, Karim, Davina and Daniella of Greenwich; and three other brothers, Christopher Connors of New York, William Connors of Hull and Douglas Connors of Quincy.

Kevin Patrick Connors was born in Boston and grew up in Quincy, Mass. He graduated from Boston College High School and won an appointment to the U.S. Naval Academy at Annapolis, where he was a well-liked member of 23rd Company. He was commissioned an Ensign upon graduation.

Kevin reported to NAS Pensacola for primary flight training. To some, Kevin appeared less than enthusiastic about the Navy. With the war in Vietnam winding down, flight classes were delayed due to a surplus of students and a declining number of fleet “seats.”

This resulted in excess free time to stray from the straight and narrow. Given this situation, and Kevin’s free spirit, he, like many young officers, was offered an exit from the program and the Navy. Kevin jumped at the opportunity and, having been accepted to graduate school at Dartmouth, eagerly made the transition.

Receiving his MBA, Kevin took his talents to Wall Street, specifically as a trader in the US Treasury Securities market where he made a name for himself as an astute and intelligent player. Lured by the excitement of New York and the securities industry a few classmates whose relationship had become closer over the years joined Kevin in New York, employed by similar firms, becoming part of a small USNA network. After receiving his MBA, Kevin was initially worked for J.P. Morgan Bank. He subsequently took a job as a managing director at Morgan Stanley, where he established the government bond department.

Kevin later founded and then sold Connors and Cook, an investment firm. For a time he operated Kevin Connors and Company near his home in Miami. He returned to New York and for the last three years held senior management positions at Euro Brokers Inc.

An avid sailor, Kevin, his brother Chris, and two friends survived the sinking of his 66-foot motor yacht “Firebird” off the coast of South America in 1975.

After two days in a life raft, the crew was rescued by a cargo ship. Following this adventure, Kevin canceled plans to travel around the world and returned to Wall Street.

He enjoyed organizing regular family gatherings full of activities. In July, 2001 for example, he completed a 550-mile bike ride across Iowa and the Midwest.

Kevin continued finding varying levels of success in the markets but most of all, he enjoyed being his own boss.

Then on the morning of Sept 11, 2001 Kevin was at work buying and selling U.S. Treasury securities as a senior vice president of Euro Brokers Inc., a brokerage firm with offices high up in the World Trade Center.

Kevin died in the World Trade Center that day as a result of those terrorist attacks.

He was among the many whose bodies were never found.

Surviving are his wife, Sylvia Loria Connors; two sons, Shane and Terence; three stepchildren, Karim, Davina and Daniella, all of Greenwich; a sister, Sheila Connors LeDuc of Lexington, Mass.; four brothers, Christopher of New York City and York, Maine; William of Hull, Mass.; Douglas of Quincy, and Russell of Kittery Point, Maine. A memorial Mass was celebrated at St. Michael's Church, in Greenwich, Connecticut and attended by a number of Kevin’s company mates from the 23rd company.

Whether it was climbing a mountain, playing charades or challenging his four brothers and his sister to a game of Monopoly, Kevin Connors would not be defeated. At work, there was the thrill of picking the next big investment for clients of Euro Brokers, where he was a vice president. At home, the simplest of family gatherings became thrill-seeking adventures. Children would be pitted against adults, and Mr. Connors, 55, would side with the team he thought had the best chance of winning.

"My brother was a voracious fan of winning at all things," said Sheila Connors LeDuc. "He once bought a boat to sail around the world. When it sank off the coast of South America, he beat the ocean by not drowning."

And when planes struck the World Trade Center, Mrs. LeDuc was certain that her brother would survive once more. Slowly, she has had to accept another probability. "This was bigger than the boat going down," she said. "I just hope he is at peace and that those of us who mourn him can come to the same peace."

Kevin is one of 17 members of the Class of 1969 on Virtual Memorial Hall.