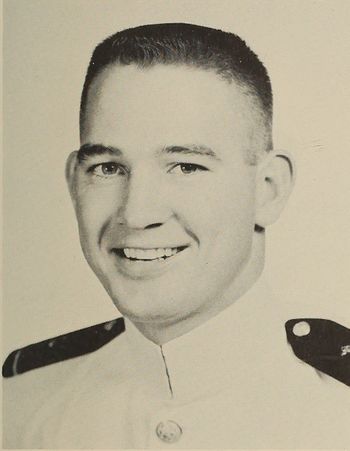 After one year at Murray State near his hometown, "Smokey" gave up the plains of Oklahoma and made his way to the Academy to join the ranks of the long blue line. At USNA he not only acquired a new nickname for himself because of his aggressiveness, but also with a small grin and likeable manner, he made many lasting friends. Always an ardent sport enthusiast, Smoke could either be found grinding it out on Hospital Point with the "Mighty Mites" or pounding away in the Brigade boxing ring. With Smokey it was always : "Pick out what you want and go after it, nothing can stop you." With this in mind along with his ability and determination, we know that he will be a success as he leaves to fly with Uncle Sam's finest.

He was also a member of the 6th Company staff (winter).

After one year at Murray State near his hometown, "Smokey" gave up the plains of Oklahoma and made his way to the Academy to join the ranks of the long blue line. At USNA he not only acquired a new nickname for himself because of his aggressiveness, but also with a small grin and likeable manner, he made many lasting friends. Always an ardent sport enthusiast, Smoke could either be found grinding it out on Hospital Point with the "Mighty Mites" or pounding away in the Brigade boxing ring. With Smokey it was always : "Pick out what you want and go after it, nothing can stop you." With this in mind along with his ability and determination, we know that he will be a success as he leaves to fly with Uncle Sam's finest.

He was also a member of the 6th Company staff (winter).

Commander Clarence O. Tolbert was a pilot assigned to Attack Squadron 56 onboard the aircraft carrier USS MIDWAY. On November 6, 1972, Tolbert launched in his A7B "Corsair" in a flight of two on a reconnaissance mission into Nghe An Province, North Vietnam. The aircraft was hit by anti-aircraft fire in the starboard wing during the mission.

Commander Tolbert immediately turned the aircraft towards the coast (the favored evasion route), just as it caught fire. The fire went out within seconds but the aircraft continued to stream fuel. Within 1 1/2 miles from the coast the flight controls apparently froze and the aircraft impacted the ground in a flat spin.

Tolbert's wingman observed the aircraft from the time it was hit until impact with the ground and observed no ejection or parachute. No radio communication was established during the whole episode. An active search and rescue effort was discontinued due to lack of visual or voice contact.

Clarence Tolbert was born on June 4, 1939, in Tishomingo, Oklahoma. He entered the U.S. Naval Academy in June 1958, and graduated with a commission as an Ensign on June 6, 1962. Tolbert remained at the Naval Academy as a Physical Education Instructor until September 1962, and then served aboard the attack cargo ship USS Arneb (AKA-56) until December 1962, when he entered flight training. He was designated a Naval Aviator on May 15, 1964, and then attended Replacement Air Group training in the A-4 Skyhawk with Attack Squadron 125 at NAS Lemoore, California, until September 1964. LT Tolbert next flew with VA-216 from September 1964 to December 1967, where he flew 145 combat missions in Southeast Asia off the aircraft carrier USS Hancock (CVA-19) between November 1964 and August 1966. His next assignment was as an Instructor Pilot with VA-122 at NAS Lemoore during January and February 1968, followed by service as a flight demonstration pilot with the U.S. Navy Blue Angels, flying the F11F-1 Tiger, from February to December 1968. From January to September 1969, he served as a Project Manager with the Naval Weapons Evaluation Facility at Kirtland AFB, New Mexico, and then left active duty in October 1969. LT Tolbert served in the Naval Reserve with VF-202 at NAS Dallas, Texas, from October 1969 to November 1970, and then returned to active duty, serving as an Instrument Flight Instructor with VA-43 at NAS Oceana, Virginia, from November 1970 to January 1972. CDR Tolbert next trained in the A-7 Corsair II with VA-174 at NAS Cecil Field, Florida, from January to June 1972, followed by service with VA-56 aboard the aircraft carrier USS Midway (CVA-41), from June 1972 until he was killed in action over North Vietnam on November 6, 1972. He was listed as Missing in Action until being declared dead on March 23, 1978. During this time, Tolbert was promoted to Captain. His remains were returned on November 3, 1988, and he was buried at the Troy Cemetery in Johnston County, Oklahoma.

The President of the United States of America takes pleasure in presenting the Silver Star to Lieutenant Clarence Orfield Tolbert (NSN: 0-659511/1310), United States Navy, for conspicuous gallantry and intrepidity in action on 1 May 1966 as a pilot in Attack Squadron TWO HUNDRED SIXTEEN (VA-216), embarked in USS HANCOCK (CVA-19), during a strike against an enemy surface-to-air missile site in North Vietnam. Lieutenant Tolbert provided essential intelligence regarding the location of the missile site and its defenses, voluntarily piloted his aircraft as the strike leader's wingman and deliberately exposed himself to a missile firing in order to determine the exact location of the launching site. In the face of an intense barrage of medium antiaircraft fire, he made repeated bombing attacks on the site, inflicting heavy damage to several missile launchers. When his aircraft was severely crippled by two successive multiple-round antiaircraft bursts, Lieutenant Tolbert displayed unusual resourcefulness and exceptional airmanship in bringing the aircraft aboard ship to a safe landing using emergency manual flight controls. His courageous actions and outstanding performance in the face of intense enemy fire reflect great credit upon himself and the United States Naval Service.

The President of the United States of America takes pleasure in presenting the Distinguished Flying Cross to Lieutenant Clarence Orfield Tolbert (NSN: 0-659511/1310), United States Navy, for heroism and extraordinary achievement while participating in aerial flight on 7 July 1966 as a pilot in Attack Squadron TWO HUNDRED SIXTEEN (VA-216), embarked in U.S.S. HANCOCK (CVA-19). While flying as wingman in the last division of aircraft, Lieutenant Tolbert demonstrated outstanding courage and determination in the face of heavy enemy opposition during a coordinated attack against the heavily-defended POL facility at Haiphong, North Vietnam. He executed a well-coordinated and perfectly timed attack through an intense barrage of enemy anti-aircraft fire, scoring several direct hits. His exceptional bombing accuracy under the most difficult and hazardous conditions was responsible for the destruction of a large pump house and extensive damage to several oil storage tanks, thus contributing significantly to the overall extraordinary success of this mission. Lieutenant Tolbert's heroic actions and exceptional airmanship were in keeping with the highest traditions of the United States Naval Service.

TISHOMINGO For the family of Navy Cmdr. Clarence "Smokey" Tolbert, the nightmare that began when his plane was shot down over North Vietnam on Nov. 6, 1972, is almost over.

Even after Tolbert failed to return with POWs in 1973 and the Navy changed his status from "missing in action" to "presumed dead" in 1978, family members still held a flickering hope he might have survived, as he had after being shot down once before.

"He'd been in tough scrapes before," Tishomingo resident E.J. Tolbert said of his brother. "I guess you don't really give up unless you have somebody flat-out tell you. It's a wound that can never heal.

Every time there's something in the news that reminds you, you say, "I wonder what happened to Smokey?' " Cmdr. Tolbert, recipient of two Silver Stars and the Distinguished Flying Cross, will soon return to his native Tishomingo. His remains were released by Vietnamese officials late last year and were recently identified by several American forensic experts.

With the latest identifications, 2,377 Americans are still listed as missing in Indochina as a result of the Vietnam War.

His remains will soon be moved from Hawaii to California and, probably in April, a memorial service will be held in Tishomingo.

"We're relieved and glad to know we'll have him back in the U.S. and on Oklahoma soil," Tolbert said. "I was beginning to wonder if it would ever be resolved."

But Tolbert said that relief is tempered by questions that may never be answered about how and when his brother died.

Family members believed the former Blue Angel perished when his Navy A-7 crashed after he was shot down during a low-level photo reconnaissance mission over the Vynh River. But the pilot's remains showed no signs of burns or other injuries associated with a crash, Tolbert said.

Tolbert said it's possible his brother may have been shot "execution-style" after escaping from his plane, or may have endured years of torture in a prison camp.

"I didn't think it would bother me too much after all these years.

But what bothers me most is that my worst fears that he was alive and mistreated may have happened. ... He did get out of that plane. He did survive. We don't know how long."

Despite the bitterness he feels toward the North Vietnamese over the possible mistreatment and the "bewildering" delay in the release of his brother's remains, Tolbert said his strongest feeling is one of pride.

His brother, a 1962 Naval Academy graduate, was in his third tour of duty in Vietnam when he flew his last of more than 200 missions at age 33. A memorial garden bearing his name has graced the campus of Murray State College in Tishomingo for 10 years. Nearby, the jet Tolbert flew with the Blue Angels is displayed.

Tolbert said he and his three brothers all had aspirations of flying.

"He lived some of my and my older brothers' fantasies by being able to become what he was. He was definitely a cut above the rest."

He is buried in Oklahoma; he is also listed in the Courts of the Missing in Hawaii.

I was enlisted and working on the flight line in VA-216 in NAS Le-Moore. Smokey was a friendly impressive guy. I believe he played on our Flag Football team also that won the base championship. But what I remember most about him was our 1967 Med Cruise on the Saratoga when he flew his A-4 upside down along side the carrier. It was Unbelievable! PAUL DUNHAM, PMD46B1BK@CHARTER.NET, 9/27/15

My husband and I were with Smokey at Oceana NAS Officers Club in 1971. Smokey was highly respected and such a kind and humble person. We were saddened when we learned Smokey was KIA. God Bless you, Smokey. You and Bob are flying together in heaven. JACKIE SHUPE, 11/1/09

He was shot down once and got feet wet so we got him back. I remember as a Yeoman being called in to type messages to everyone including his brother who was to tell his father. We rejoiced when we got him back the first time. I remember how empty I felt when we lost him the second time. As a young man of 19 or 20 he was more of the type of person I respected from afar then the type I could really get close to. He was more like a John Wayne type of man to me. LEO CARPENTER, 2/28/02

Clarence was a pilot with the Blue Angels and had to eject once during an air show. He was a member for the 1968 show season.

Article above says he was recipient of two Silver Stars; this appears to be incorrect. Only one listed in Hall of Valor database, and one pictured in his shadow box.

Two sources claim he was promoted to Captain before being declared dead, but have found no documentation to support this, and all reporting well after his death (i.e., 1989) gives his rank as CDR.

Clarence is one of 30 members of the Class of 1962 on Virtual Memorial Hall.

Retrieved from "http://usnamemorialhall.org/index.php?title=CLARENCE_O._TOLBERT,_CDR,_USN&oldid=132838"
Categories:
This page was last modified at 22:53 on 6 October 2020.
About USNA Virtual Memorial Hall