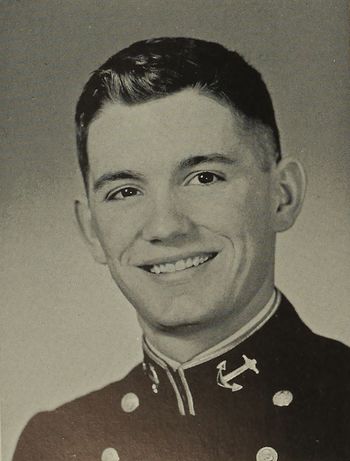 A true citizen of the Lone Star State, Don's many and varied experiences prior to, and after, entering the Academy gave him a collection of all tales which provided welcome entertainment at any time. His friendly personality won him a wealth of companions throughout the Brigade. Enthusiastic about everything he did, Don added much to the design of the class crest as a member of the Ring Committee. In athletics, Don devoted his talent to rowing with the varsity 150 pound crew team. A "tin can sailor" since Youngster cruise, he is looking forward to a long and successful Naval career.

A true citizen of the Lone Star State, Don's many and varied experiences prior to, and after, entering the Academy gave him a collection of all tales which provided welcome entertainment at any time. His friendly personality won him a wealth of companions throughout the Brigade. Enthusiastic about everything he did, Don added much to the design of the class crest as a member of the Ring Committee. In athletics, Don devoted his talent to rowing with the varsity 150 pound crew team. A "tin can sailor" since Youngster cruise, he is looking forward to a long and successful Naval career.

From U. S. Naval Forces, Vietnam Monthly Historical Supplement for May 1967 (beginning page 15):

On 24 May the Officer in Charge, River Patrol Section 531, three PBR crewmen and a Vietnamese maritime policeman were killed by intense enemy fire from the north bank of the Ham Luong, six miles south of Ben Tre. Five other US sailors were wounded during the action.

The river patrol, composed of PBRs 101 and 106, was attacked by automatic-weapons fire from several Viet Cong positions along the bank. The leading boat, PBR 101, returned the fire and was almost immediately hit forward by a round of 57-MM recoilless-rifle fire. The burst killed the patrol officer, LT C. D. WITT, USN, the forward gunner. Fireman T. F. LEAZER, USN, and the boat captain, Electronics Technician Second Class R. L. CASTLEBERRY, USN. Moments later, machine-gun fire killed the midships gunner, Seaman M.C. QUINN, USN, as the PBR veered toward the bank out of control.

The PBR's sole survivor, Seaman M. J. DEVLIN, USN, was wounded but managed to bring the stricken boat under control and turn clear of the range of fire.

PBR 106 covered 101's withdrawal and launched a high-speed run against the enemy positions. During the ensuing heavy exchange of fire, a 57-mm round struck the boat's vertical armor, killing a Vietnamese National Maritime Policeman Troung Houng CHAU, and seriously wounding the boat captain and the after gunner. In addition, the round's impact disabled the boat's port engine. The PBR continued the engagement, weaving and delivering a high volume of fire at the stretch of enemy sites until the PBR's supply of ammunition was nearly exhausted.

Shortly thereafter a PBR patrol from an adjacent area rendezvoused with PBRs 101 and 106 and escorted them to Ben Tree. As result of the action, PBR 101's radar and forward gun mount were destroyed, and PBR 106 sustained extensive damage to its engines and hull. Intelligence reports later indicated that the fire from the PBRs and subsequent air strikes killed at least 19 Viet Cong and wounded 36 others. 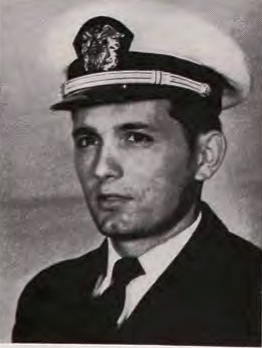 From the September-October 1967 issue of Shipmate.

From the September-October 1967 issue of Shipmate:

Lt. C. Don Witt, USN, died as die result of heavy enemy rifle fire while on board a river patrol boat in the Ham Luong River south of My Tho, South Vietnam, on 24 May. Five other men in the boat were killed in the ambush. Services were held in the New Christian Church at Lubbock, Tex., with graveside services and interment at Lubbock Cemetery with military honors.

Lt. Witt was born in Amarillo, Tex., and graduated from the Lubbock High School where he was manager of the Westerner football team. He attended Texas Institute of Technology for one year before entering the Naval Academy, from where he was graduated in 1959. He served four years in the destroyer DE HAVEN, as damage control assistant and chief engineer. The DE HAVEN was stationed in Japan for three years and in Yokosuka he became a Master Mason of the Yokosuka Lodge. He also had duty as operations officer in USS PROVIDENCE.

In the fall of 1964 Lt. Witt attended the Naval Postgraduate School at Monterey, Calif., where he received a Bachelor of Science degree in meteorology. He served with Commander, Amphibious Training Command Pacific and the Naval Inshore Operations Training Center, Mare Island, then in February was assigned to Commander River Patrol Force Vietnam. He had attended the counterinsurgency, survival training and Vietnamese Language School. He was an expert pistol shot and held the Armed Forces Expeditionary Medal for the Lebanon Operations 1958. At the time of his death he was commander of River Patrol Force Section 531 at My Tho.

He also had a sister.

Lt. Charles Witt was in my Jungle training group in the Philippines and he befriended me there in the jungle. He was very proud of his family and took a picture out of his wallet and showed me his wife and son and daughter. I will always remember that picture. He and I traveled together to My Tho on a De Havilland Caribou and Lt. was assigned as CO of 531 and I was assigned to the 131 boat of 532. My memory of him was that he was tall and a fine officer and gentleman. I am honored to have served with him. STEPHEN D. SUMRALL, FTG3, 5/26/12 RVRAT131@COMCAST.NET

Your family loves and misses you very much and think about you everyday.

I personally try hard to honor you with my actions, I hope you are proud as we are all very proud of you.

The President of the United States of America takes pride in presenting the Silver Star (Posthumously) to Lieutenant Charles Don Witt (NSN: 0-631027), United States Navy, for conspicuous gallantry and intrepidity in action on 19 May 1967 while serving with River Patrol Section FIVE HUNDRED THIRTY-ONE and friendly foreign forces during combat operations against the communist insurgent forces along the Ham Luong River, Republic of Vietnam. While serving as Patrol Officer for River Patrol Boats (PBR's) 104 and 106 on a combat patrol eighteen miles south of My Tho, Republic of Vietnam, Lieutenant Witt sighted a junk reversing its course on a Ham Luong tributary. Without hesitation, he commenced a chase of the evading craft, successfully destroying it along with another Viet Cong junk, despite semi-automatic and automatic fire from the junks, a hut and enemy-manned bunkers along the bank. The destruction of these junks was marked by secondary explosions resulting in 180 to 200-foot columns of black smoke. The four confirmed enemy killed included a deputy commander of a Viet Cong company; among the seven confirmed enemy wounded was a commander of a Viet Cong company. The junks were part of the re-supply equipment of two enemy companies. Lieutenant Witt led his PBR patrol back to the main river with no personnel loss or material damage to his units. His inspiring aggressiveness and courage were in keeping with the highest traditions of the United States Naval Service.

Charles is one of 32 members of the Class of 1959 on Virtual Memorial Hall.

Retrieved from "http://usnamemorialhall.org/index.php?title=CHARLES_D._WITT,_LT,_USN&oldid=138384"
Categories:
This page was last modified at 10:45 on 21 May 2021.
About USNA Virtual Memorial Hall