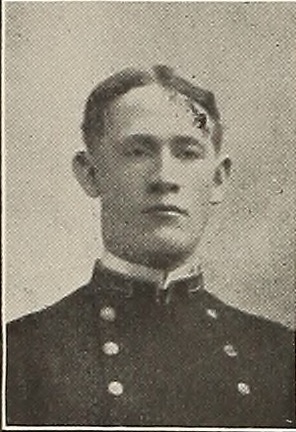 Born in Georgia, Wood was appointed to the United States Naval Academy on 6 September 1895. He served as a midshipman on the battleship Texas during the war with Spain in 1898, before graduating with the class of 1899. Wood later joined Oregon (Battleship No. 3) on the Asiatic Squadron to serve part of the two years required by law before commissioning.

Subsequently, Wood was given command of the gunboat Urdaneta, then operating in the Philippines during the Philippine–American War. Naval Cadet Wood was killed in action, on 17 September 1899, when his ship ran aground in the Orani River, near Manila, and was overwhelmed by insurgent troops who enfiladed the gunboat with a withering fire from the shoreline.

Welborn is listed on the killed in action panel in Memorial Hall under the heading "PHILIPPINE INSURRECTION 1899-1901."

He is buried in Georgia.

Via Find A Grave:

Naval Cadet Welborn Cicero Wood, the Georgia boy who was with Watson's gunboat which was destroyed a few days ago at Manila, was given the appointment to the naval academy at Annapolis by the Hon. Carter Tate, of the ninth district. Young Wood was the personal choice of the congressman for the place, and was not required to stand a competitive examination. Congressman Tate had known the young man, and was thoroughly satisfied that a better representative could not be sent from the Empire State of the south, and the young Georgian's career has borne out the estimate.

When young Wood entered the academy he was a green mountain boy. He stood five feet eight inches in his socks, and was well proportioned. He was the picture of health and life, and no athlete trained for the most exacting work could have shown to better advantage than the young mountaineer. He was quiet, inclined to be taciturn, but withal a close observer of events around. His entering examination gave him a good standing in his class, and from the first he showed an aptitude for the work he had undertaken—the making of a naval officer. During his full term at the academy he applied himself assiduously to his books, giving none of his time to social or other events which are attractive features of cadet life, and when his final papers were passed upon it was found that he stood eighth in a class of fifty-six. He was a classmate of Clark Howell Woodward, of Atlanta, who is now at Manila, and with Cadet Woodward was sent to the fleet off Santiago, then guarding Cerveza in that harbor. Young Wood was assigned to the Texas, commanded by Captain Philips, and was on the lookout when the Spanish fleet made its move out of the harbor. He and another officer on watch with him were the first to detect the movement of the Spanish fleet, and between those two Americans rests the honor of running up that famous 250 signal—a signal which every naval man in sight knew meant "The enemy is escaping." He was on the Texas during the engagement, and his record was as good as that made by any man in that memorable engagement.

With his classmates he returned to the academy, where he graduated the next spring. Upon his graduation he was assigned to the Chicago, but he did not like the assignment, because that vessel was stationed in waters where peace reigned. He secured a leave and went at once to Washington and called upon Mr. Tate, his congressman, before whom he laid the matter and asked to be presented to the secretary of the navy. Congressmen Tate advised young Wood to accept what had been given to him, and abandon his idea of a transfer—that was what he said he wanted to ask of Secretary Long. But the young Georgian was firm, he had made up his mind.

"You see," he said to the congressman, "I may never have another chance in a lifetime. They navy is slow to promotion, and over there I may have a chance. I certainly won't have't here."

Congressman Tate reluctantly gave his consent, and shortly afterwards entered the navy department building with Cadet Wood. The young man was presented to the secretary by Congressman Tate, who stood aside to hear him put his case. This he did in a manner both straightforward and concise—a manner that created a most favorable impression. The secretary heard him through and then quietly remarked:

"You are the kind of stuff the navy wants. You can go to Manila."

A transfer was at once made out for young Wood, and when the Solace left America with the graduating class fresh from the academy Cadet Wood was on it. The rest of the story has been told in the press dispatches.

Young Wood's father is a government storehouse keeper, and has been for years. His mother is dead. Two brothers survive him, one a mere boy, the other a growing lad. He was raised in a careful manner, and if he is yet alive, good reports are sure to come from him. If he is dead, a promising officer's life has been given to show the devotion of the people of the south to the old flag under which young Wood was fighting.

I was talking with Congressman Tate about the young man a day or two ago. The congressman has in his pocket a telegram which he had just received from Secretary of the Navy Long. In that telegram the destruction of the gunboat was related, and the statement gave little doubt as to the fate of young Wood.

"He was," said the congressman, "one of the most promising young men I have ever known. Georgia is full of young man—young men who have no superiors—but young Wood would have been hard to top off. He was faithful, dutiful and obedient at home, and a youngster the sort that always makes a good man. I knew him in the mountains, where man is best known by man. There was no deception, no art, no meanness. He was always manly and open. Nothing he did but would bear the searchlight of investigation. I remember when he came to me asking for the appointment. I had known him from his infancy, for his father and I had been old schoolmates, and it at once struck me that he would make a fine officer. He had the looks, and I knew his make-up. I gave him his appointment, and it is the one thing of which I am more proud than all others since I have been in congress. By it I have shown the country what Georgia produces in the way of good students, sober young men and country loving, flag defending citizens. That is enough to make me feel that I had done a good day's work when I gave young Wood that appointment. When he went to the academy I knew what a big, green fellow he was, and undertook to give him advice. I knew that he would develop into a handsome man as soon as the edges were rubbed off. Well, after he graduated I asked him about the social features at the academy, and, very much to my astonishment, he informed me that he hadn't been 'out' a half-dozen times. He gave his time to his books, and nothing else, and the result was shown in his standing when he graduated. I have little hope of ever seeing him again. Knowing him like I did, I know how he went into that fight. There wasn't anyone in it who fought harder than he. I cna see him in the lead fighting for those men he led, showing them how to defend themselves and die as an American should. No, young Wood's record may have been short, but no man who gave a lifetime to the service ever served his country more loyally and more devotedly than Welborn Cicero Wood, of Pickens county, Georgia."

Welborn is one of 4 members of the Class of 1899 on Virtual Memorial Hall.