Ernest Augustus Weichert was admitted to the Naval Academy from Connecticut on September 6, 1895. 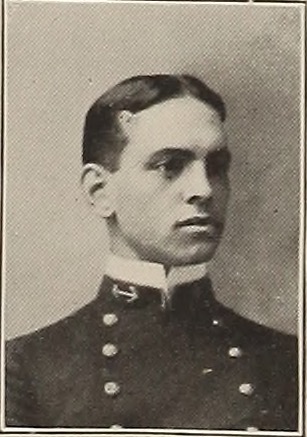 Ernest was lost on April 13, 1904 when the port 12" gun in the aft turret aboard Missouri (Battleship No. 11) flared backwards, ignited three propellant charges, and started a fire. Thirty-five others were also lost. He was stationed aboard the cruiser Cleveland but was aboard Missouri as a gun umpire.

His father John Frederick, a hat finisher who probably worked for the famous Danbury Hatters. His mother was Johanah. His brother was Rudolph who became a land and oil lease agent in Texas. His sisters were Susan, a nurse, Lottie, a music teacher, and Anna, a high school teacher.

Ernest is buried in Connecticut.

Ernest's classmates erected a plaque in his honor in Memorial Hall.

Ernest is one of 4 members of the Class of 1899 on Virtual Memorial Hall.