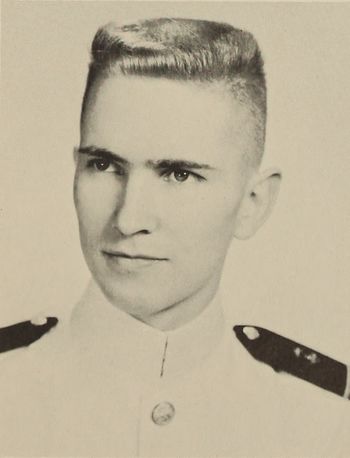 This product of Colorado's high mountains and thin air began his Academy career with a pile of plebe summer demerits but also with a humorous outlook on life that remained undaunted during his stay. Tearing into his studies with a hunger for knowledge matched only by his hunger for anything edible, he remained at the top of his class in every course. During his free time he strived to improve himself both physically and mentally. It was not all uncommon to find him working or studying while his classmates slept. While at the trade school, John fell in love with the idea of rowing up and down the Severn and proceeded to letter in lightweight crew. The Navy will be proud to have a man of John's intelligence and determination.

He was also a member of the 15th Company staff (fall).

This product of Colorado's high mountains and thin air began his Academy career with a pile of plebe summer demerits but also with a humorous outlook on life that remained undaunted during his stay. Tearing into his studies with a hunger for knowledge matched only by his hunger for anything edible, he remained at the top of his class in every course. During his free time he strived to improve himself both physically and mentally. It was not all uncommon to find him working or studying while his classmates slept. While at the trade school, John fell in love with the idea of rowing up and down the Severn and proceeded to letter in lightweight crew. The Navy will be proud to have a man of John's intelligence and determination.

He was also a member of the 15th Company staff (fall). 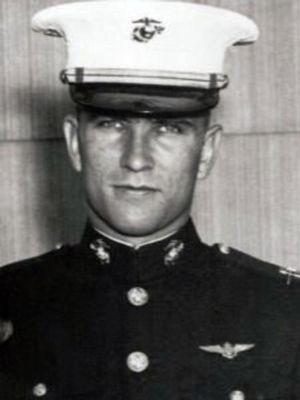 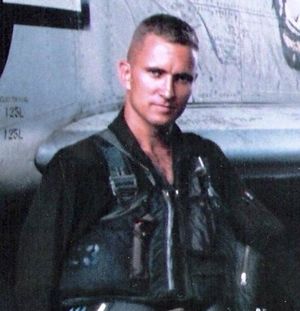 From the December 1968 issue of Shipmate:

Capt. La Voo, a native of Pueblo, was graduated from the Naval Academy in 1962 with honors. Following Basic School, at Quantico, Va., he taught Platoon Leaders Classes during the summer of 1963, then went to Camp Pendleton, Calif., for two months prior to his first Vietnam tour of duty as an infantry officer with Fleet Marine Force in Western Pacific.

In August 1965 he reported for flight training at Naval Air Station, Pensacola, Fla., then had jet pilot training at Naval Air Auxiliary Station, Meridian, Miss., and at NAAS Kingsville, Tex. After being designated an aviator on 1 Dec. 1966, he was assigned to F-4 (Phantom) Squadron VMFA-513 at Cherry Point, N. C, then to F-4 Squadron VMFA-542, Marine Air Group 11, now stationed at Da Nang. Among his awards were the Vietnam Campaign Medal, the Armed Forces Expeditionary and National Defense Medals, and a number of Air Medals.

From Arlington Cemetery, sometime in 1999:

The Vietnam War will finally come to an end this summer for a Pueblo family, 31 years after its oldest son was shot down while flying a bombing mission over North Vietnam.

Konstance LaVoo, 82 years old and blind for the past 12 years, was recently notified by the U.S. Marine Corps that the remains of her son, John, have been positively identified. The U.S. government will fly her and several family members to Arlington National Cemetery, where her son will be given a military burial July 19.

Captain John LaVoo was 27, a graduate of the U.S. Naval Academy in Annapolis and a Marine pilot when he was shot down in an F-4 Phantom jet over Quang Binh Province, North Vietnam, on Sept. 19, 1968. His navigator, Marine Capt. Robert A. Holt, of Reading, Massachusetts, also died in the crash. A joint U.S.-Vietnamese team found the crash site in 1994 and located 25 bone fragments. They were positively identified as those of the two airmen through DNA testing.

"It was terrible," said Konstance LaVoo, whose husband died in February. "I had lost a daughter to multiple sclerosis at 23. And now I couldn't believe this could happen. At first they (the Marines) told us only that he was missing. I thought he might find some shelter and be OK.

"The day I kissed Johnnie goodbye, I asked him, 'You will come home, won't you?' He said, 'Mama, if I don't, you'll always know where I am.' He always trusted in God. I didn't think he was a prisoner of war. We were so close that I would have felt it if he was in trouble or a captive.

"After I accepted the fact that he wasn't coming back, I got a letter from his commanding officer that they had held a memorial service for him. I tried not to grieve over it too hard."

She said the service next month will relieve a lot of the pain.

"I think it's going to be a good closure."

Lavoo had a choice of either the Air Force Academy or the Naval Academy; he chose the latter because of its older tradition, McCluskey said.

Lavoo was the oldest of four children. Juliette Lavoo died of multiple sclerosis. Another sister, Jeanette Swearingen, now lives in Denver and Penrose, and a brother, James, lives in Garden City, Kansas.

At the time of his death, Lavoo had been married to his wife, Rosalie, for six and a half years, and had a daughter, Karna, 2. "It was the end of hopes and dreams for a young couple," recalled his widow. "It's very consoling now, to have this closure. We can finally pay our respects to John."

Before he left for Vietnam in 1968, Marine Corps F-4B Phantom fighter-bomber pilot Captain John A. Lavoo told his mother, "If I don't come back, you'll know where I am."

He didn't come back. And it took more than 31 years locate, repatriate, identify and return his remains and those of his friend and navigator-bombardier, Marine Captain Robert A. Holt, to their families for burial.

"I feel so relieved to know that he definitely has been found," Konstance Lavoo said after the July 19, 1999 military memorial ceremony at Arlington National Cemetery. "I'm grateful. I felt in my heart that he was safe with God. I didn't feel he was in any pain or agony. And I always felt like I knew where he was."

POW/Missing Personnel Office spokesman Larry Greer said Lavoo and Holt crashed on September 19, 1968, after launching rockets against a target in Quang Binh, North Vietnam. A large explosion reportedly erupted when the jet crashed. According to incident reports, the wingman saw no parachutes, heard no beepers and, along with a tactical control aircraft, made low passes over the wreckage and saw no sign of survivors. An electronic sensor search was fruitless; the enemy presence prevented ground search and rescue efforts.

Human remains and crew-related artifacts were uncovered at the suspected crash area after two years of research and nine months of excavation by U.S. and Vietnamese investigators. They were repatriated in September 1994.

The Army Central Identification Laboratory in Honolulu in April positively identified some remains as Holt's and others as Lavoo's and returned them to the families for burial. There were remains so badly damaged, however, that lab scientists couldn't assign them to either man.

"This was a very bittersweet day," Krulak said after the ceremony. "The families have gone on with their lives. They had already said their goodbyes, and yet here's a chance to bring John Lavoo and Bob Holt back to their home and the country they fought and died for, and put them to rest here in this very sacred place."

Clifford Holt, 83, buried his son's identifiable remains in Reading, Massachusetts, about 15 miles north of Boston. "I felt [they] belonged with his mother, who passed away more than 20 years ago," he said.

The elder Holt, of North Port, Florida, attended the Arlington ceremony. He said he was shocked when he received news that his son's remains had been identified. "It brought a partial closure," he said, noting that, from the crash reports, he knew his son hadn't survived. "We didn't think it was practical that he survived, so we had to face reality and live with that."

Lavoo's daughter, Karna, was 2 when he died. She said she was going into labor earlier this year when told her father's remains had been identified.

"It was kind of a shock because analysis of the remains had been going on a few years," the Marshfield, Wis., resident said. "I felt more sadness, because even though I don't know him, I'd always heard about him being a great man. It's hard to think about the potential he never had a chance to pursue." The American Forces Press Service

The Arlington Cemetery page has several pictures of his memorial service on July 19, 1999.

John was my "hootch-mate" on the day he was shot down over Vinh North Vietnam. We shared many things such as mail and "goodies" from home when one or the other didn't receive something. I had breakfast with him on the morning of his death when he and his backseat (RIO) Captain Robert A. Holt, USMC launched in a flight of two Phantoms (F-4B's). After 31 years, the remains of Captains LaVoo and Holt were repatriated, identified and returned to their families for burial. That joint, full honors, ceremony took place on 19 July 1999 in Arlington National Cemetery with over 100 of John & Bob's family, squadron mates, Naval Academy classmates and fellow infantry battalion officers, and their families present. The fly-by was assigned to VMA-542 the current attack squadron in honor of the VMFA-542 fighter-attack squadron of the Vietnam era. John was one of the finest officers ever to wear a Marine uniform, widely respected by all who knew him over his entire military career. He was truly an exceptional Marine. Respectfully, Joseph F. Featherstone
Major, USMCR, Retired
JRHD@AOL.COM, 3/12/00

I was a sergeant in com/nav with VMFA 542 in 1968. Iwakuni, Cubi Point and Da Nang. I remember you as one of the best officers in the squadron. You were one of the most fit Marines I have ever known. I am proud to have served with you. I will never forget you. BOB SHERMAN, RNSHERMAN@BPA.GOV, 8/16/05

Charles Knochel '62 was also a member of 15th Company and shares the same Lucky Bag biography page. In the Fall semester, John was Company Commander and Charles was Company Sub-commander.

John is one of 30 members of the Class of 1962 on Virtual Memorial Hall.