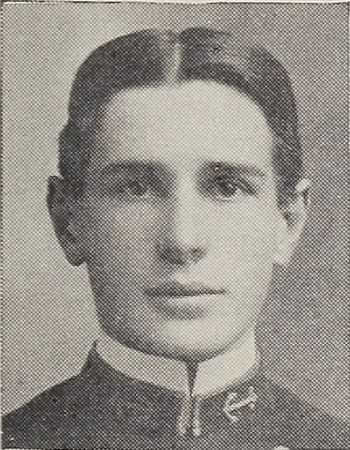 A complicated combination of eccentricities of pugnacious propensities; the human interrogation point, possessed of a never-satisfied curiosity; the class mule.

A complicated combination of eccentricities of pugnacious propensities; the human interrogation point, possessed of a never-satisfied curiosity; the class mule. 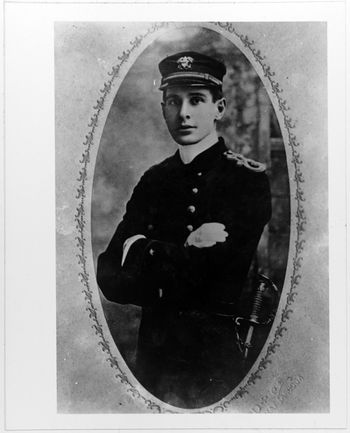 Noa was appointed to the U.S. Naval Academy as a naval cadet on September 5, 1896. He graduated in June 1900. He was ordered to the Asiatic Station in gunboat Mariveles. On the morning of October 26, 1901 Midshipman Noa, with an armed crew of six men, put off from the Mariveles in a small boat to watch for craft engaged in smuggling contraband from the island of Leyte to Samar. When ready to return to the Mariveles, they found the wind and the tide against them. The boat was taking on water, and they put into a small cove on the island of Samar. While scouting the adjacent jungle, Noa was attacked and stabbed five times by Filipino insurgents, three times in the abdomen, one in the chest, and one in his left shoulder. He was then given a blow to the head. He died after fifteen minutes, before aid could reach him.

He is buried in Tennessee.

Loveman is listed on the killed in action panel in the front of Memorial Hall under the heading "PHILIPPINE INSURRECTION 1899-1901."

He kept a journal from the time of his graduation until the month before his death.

On May 28 a memorial tablet to the late Loveman Noa, of Chattanooga, was unveiled at the United States Naval Academy at Annapolis, Md. Mr Noa was a United States naval cadet, who was ambushed by natives of the Island of Samar on Oct. 26, 1901. He was a son of Mrs. Ismar Noa, of this city.

The tablet, which is of bronze, has upon it the following inscription:

Ambushed by Natives of the Island of Samar While in Command of an Expedition During the Philippine Insurrection.

In Honor of His Memory This Tablet Is Erected by His Classmates.

The speech of presentation was delivered by Lieut. W. G. Mitchell, of the United States navy, and will be of interest to the many who remember Loveman Noa as one of the most promising young men of Chattanooga. Lieut. Mitchell said:

Ten years ago, at this time, the class of 1900 was absorbed with preparations for graduation from the academy. Each member was looking forward eagerly to active duties afloat—to the realization of his hopes of the past four years. Graduation day came with its feverish excitement and the growing impatience to be free from academic restraints and regulations and to get out into the world. On that beautiful spring morning, surrounded by many friends and much gaiety, little heed was given to the thought expressed by the secretary of the navy—that these young men were about to embark on a career which means a devotion of his life to one’s country’s honor and glory, and the sacrifice, if necessary, of life itself. The chance of ever being called upon to contribute so heavily seemed too remote for serious consideration at such a time.

Diplomas and orders were delivered and the class was scattered to the corners of the earth. Hardly more than a year later the impressive words of the graduation address were driven home to each heart when the news was received from the Philippines that a classmate—Loveman Noa— had forfeited his life in his country’s service. There is no doubt but that every graduate of this academy has at one time considered the possibility of being called upon to sacrifice his life for his country. In every case, I dare say, a little prayer has been offered that, if the call comes, it may find him in action and that he may fall fighting.

Every man who knew Loveman Noa knew of his courageous heart. His was a spirit of clear grit through and through, endowed with a tenacity of purpose that never permitted him to acknowledge defeat even to himself. The circumstances of his death show us that he carried out the predictions of his life. All who knew Noa know that he fought valiantly and that he fulfilled to the last the best traditions of the naval service. Our recollections of him go back to our undergraduate days, and we remember him with deep affection and brotherly good will. Maturer years have formed in our hearts and minds the profound respect felt for those who have given their lives for the advancement of civilization and the good of all mankind.

With the permission of the superintendent, the class of 1900 have placed this tablet on the walls of this sacred edifice as a tribute to the memory of Loveman Noa and as a symbol of their loyalty, in the hope that his name and noble sacrifice will be remembered by the succeeding graduates of this institution.

Loveman is one of 6 members of the Class of 1900 on Virtual Memorial Hall.