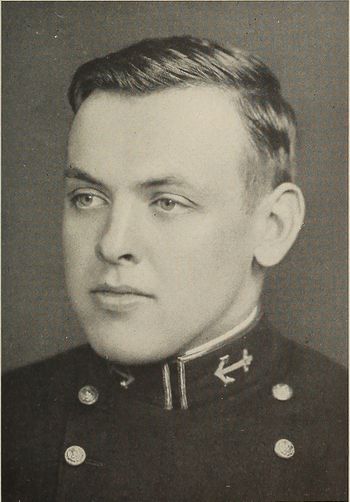 With an orange in one hand and a lemon in the other, Willie landed from the sun and rain swept slopes of California. His first love was the Navy and with characteristic diligence he set himself to stand among the first in his class. His second love was in the family of one of our nation's venerated law makers where his diligence set him at the head this time to stand one. In athletics, he turned to water polo which stimulated his gargantuan appetite to the detriment of his figure. We who know him find him a steadfast friend and true and with genuine regret give him up to the Fleet.

With an orange in one hand and a lemon in the other, Willie landed from the sun and rain swept slopes of California. His first love was the Navy and with characteristic diligence he set himself to stand among the first in his class. His second love was in the family of one of our nation's venerated law makers where his diligence set him at the head this time to stand one. In athletics, he turned to water polo which stimulated his gargantuan appetite to the detriment of his figure. We who know him find him a steadfast friend and true and with genuine regret give him up to the Fleet.

John was lost when USS Atlanta (CL 51) was sunk on November 13, 1942 during the Naval Battle of Guadalcanal.

(Note one other report indicates he was aboard USS Juneau; will retain him as aboard USS Atlanta, as is reported in the listing of overseas losses of the Navy, until other evidence emerges.)

He is buried in Manila American Cemetery and Memorial, Philippines.


Lieut John Christian Isham, of Redlands, yesterday was announced by the U. S. navy department having been killed in action while in performance of his duty with the American fleet in the Pacific. News of the 28-year-old officer death came to his parents, Mr. and Mr. Arthur E. Isham, of 832 Alvarado street, in a telegram from Washington, D. C. The message was explicit in stating that the lieutenant' post and the location of his death should not be divulged because the information might be of use to the enemy.

Ironically, young Isham was killed after he had been granted leave, which would have permitted him to visit his wife in Honolulu. The order to give him liberty was in a mail sack aboard the U. S. S. Astoria when the Japs sunk this ship at Tulagi on Aug. 9. The mail bag floated to the surface and was recovered. Meanwhile, however, Lieutenant Isham had been transferred to another cruiser and could not be released when his new ship went into Solomon islands action.

The officer's parents had been hoping in recent weeks that the furlough would permit him to visit Redlands.

IN ALL BATTLES
Isham had been a participant In every major naval engagement since the outbreak of war in the Pacific. He was cruising at sea when Pearl Harbor was attacked, but later he engaged in the Americans' raid on the Marshall and Gilbert islands, the battle of the Coral sea, the great Midway island victory over the Jap fleet, and various fights in the Solomons area. As gunnery officer, on the heavy cruiser Astoria, he was with a landing party that set up a fire control station on Tulagi when the Astoria was sunk. A shell that demolished his quarters on the Astoria would have killed him if he had been there. He lost all of his possessions as It was. Immediately young Isham was assigned to another heavy cruiser, on which he probably was serving at the time of his death.

OUTSTANDING OFFICER
In the navy for eight years, Isham had achieved conspicuous success. He was graduated from the United States naval academy, Annapolis, Md., with the class of 1938. He went to the Astoria immediately as assistant navigation Officer. Two later promotions advanced him to the rank of lieutenant, senior grade.

On June 2, 1940, he was married to Marion Donahey, daughter of Ohio's Senator Vic Donahey. She has been residing in Honolulu. Senator Donahey is a former governor of Ohio. The lieutenant was the youngest son of Mr. and Mrs. Isham. The eldest, Major Carl Isham, is with an armored force last reported to be at Fort Knox, Ky., preparing for overseas action. Paul Isham is first engineer on an armed cargo vessel plying the Pacific, now presumed to be in the Alaskan area. Earl Isham is an engineer in charge of tool design for the Northrup aircraft plant at Hawthorne. Their sister, Mary Jane Isham, works in the dispatcher's office of United Air Lines at San Francisco.

John Isham was born in Redlands on March 27, 1916. He was graduated from Redlands High school in 1933, having distinguished himself as a musician and scholar. He played center for two years on the Redlands high football team, and at Annapolis he led the orchestra. Also, at the naval academy, he made the highest grade in the entire class in navigation and seamanship, and finished among the highest of his class.

An athletic trophy will be awarded in memory of Lt. John Christian Isham, killed in action on the U.S.S. Juneau while acting as flag lieutenant to Rear Admiral Norman Scott, who was killed in the same action.

Commander William Eaton '21 was honored at the same ceremony; both had served with Captain Preston Haines (commanding officer of the Tufts NROTC unit) for two years aboard USS Astoria.

John is one of 72 members of the Class of 1938 on Virtual Memorial Hall.

The "category" links below lead to lists of related Honorees; use them to explore further the service and sacrifice of the alumni in Memorial Hall.
Retrieved from "http://usnamemorialhall.org/index.php?title=JOHN_C._ISHAM,_LT,_USN&oldid=122059"
Categories: