He resigned from the Naval Academy on February 11, 1938 because he was “Deficient in studies, first term's work. Recommended to be dropped. Permitted to resign.”

John Daniel Harris is listed on the page titled “And Some We Knew.” 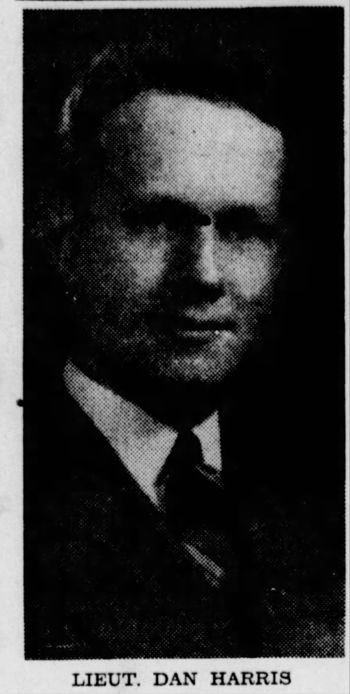 At 13.33 hours on 4 November 1942 the unescorted William Clark (Master Walter Edward Elian) was hit on the port side amidships by one of three torpedoes from U-354 off Jan Mayen Island. It is possible that the ship was earlier attacked and damaged by bombs from a German Ju88 aircraft of II./KG 30. The torpedo struck in the engine room, disabling the engine, flooding the room and killing the five men on watch below. 66 of the eight officers, 33 crewmen and 30 armed guards (the ship was armed with one 5in, one 3in and eight 20mm guns) abandoned ship in three lifeboats. The U-boat missed the ship with a torpedo at 14.00 hours and hit her ten minutes later with a coup de grâce on the starboard side amidships. The Liberty ship broke in two forward of the midship house and sank in a few minutes.

The lifeboats stayed together with the motorboat towing the other two, but they became separated in moderate seas. 26 survivors in one lifeboat were picked up after three days by HMS St. Elstan (FY 240) (Lt R.M. Roberts, RNR) about 20 miles from the sinking position and landed at Reykjavik on 14 November. On 12 November, 15 survivors and two bodies in another boat were picked up by HMS Cape Palliser (FY 256) (Lt B.T. Wortley, RNR), but an armed guard died before they were landed at Akureyri and two men lost their legs due to exposure. The motorboat with the master and 22 other men was never seen again after they set sail for Iceland. A total of four officers, 14 crewmen and 13 armed guards were lost.

The William Clark had left Boston in convoy BX-35, joined convoy SC-99 in Halifax and arrived in Iceland on 19 September. She was one of ten vessels sent unescorted and alone on the Murmansk run due to the high losses in previous convoys, but none of them reached their destination.

Son of Mr. Iver Harris, of New Philadelphia, OH. He was one of the 23 occupants in the motorboat that was never seen again after the sinking of William Clark.

His father was listed as next of kin; he was also survived by his mother, sister, and brother.

After leaving the Naval Academy he graduated from the University of Virginia in 1940 "and was summoned to duty 15 days later. He received a citation while serving on the cruiser Phoenix in the Pacific, but recently had been on duty in the Atlantic war zone." (The Evening Independent, December 29, 1942.)

John's date of rank (as Ensign) in the 1941 edition of "Commissioned Officers, Cadets, Midshipmen, and Warrant Officers of the United States Naval Reserve" was December 12, 1940.

John is one of 91 members of the Class of 1940 on Virtual Memorial Hall.

The "category" links below lead to lists of related Honorees; use them to explore further the service and sacrifice of the alumni in Memorial Hall.
Retrieved from "http://usnamemorialhall.org/index.php?title=JOHN_D._HARRIS,_LTJG,_USNR&oldid=127859"
Categories: