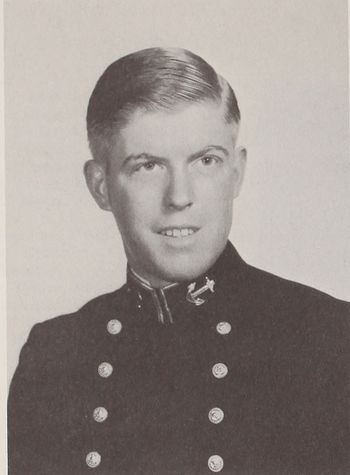 Dick, "the red flash" from the "windy city" decided to join the Navy despite a family history strongly attached to the Army. He gained his naval experience as well as his appointment through NAPS. A validator in the English, History, and Government Department, Dick has found time to develop an astounding talent in the field of creative writing, and his interest is concentrated in the study of liberal arts. Despite his busy schedule, Dick always found time for a timely joke, a few hours in the pad, and a friendly game of bridge. Dick will certainly be a welcome addition to any Naval unit.

Dick, "the red flash" from the "windy city" decided to join the Navy despite a family history strongly attached to the Army. He gained his naval experience as well as his appointment through NAPS. A validator in the English, History, and Government Department, Dick has found time to develop an astounding talent in the field of creative writing, and his interest is concentrated in the study of liberal arts. Despite his busy schedule, Dick always found time for a timely joke, a few hours in the pad, and a friendly game of bridge. Dick will certainly be a welcome addition to any Naval unit.

LTJG Richard C. Deuter was a Bombardier/Navigator (BN) assigned to Attack Squadron 196 onboard the aircraft carrier USS RANGER. On November 22, 1969, he launched with his pilot, Commander Richards, in their A6A Intruder aircraft on a bombing mission into Laos. The assigned mission was visual dive-bombing under the control of an airborne Forward Air Controller (FAC). Once in the target area, the FAC assigned a target and the aircraft was rolled into a normal dive-bombing attack. At some point in the dive, probably just before bomb release, the aircraft became completely uncontrollable and began to disintegrate. Commander Richards ordered LTJG Deuter to eject, then ejected himself. The aircraft continued to disintegrate and crashed into the ground. Only the pilot's parachute was seen by search and rescue aircraft. Commander Richard's emergency radio helped in pinpointing his location and he was rescued by helicopter approximately 30 minutes after landing. Search efforts failed to turn up anything on Deuter.

It is believed that the aircraft was hit by anti-aircraft fire in its dive and suffered a structural failure which led to its loss. With all facts considered, it is impossible to state conclusively whether or not Deuter successfully ejected from the aircraft. He was classified Missing in Action.

He has a memorial in Honolulu.

It is, indeed, a small world. When I returned from Viet Nam in 1971, I was stationed at the Naval ROTC Unit at the Illinois Institute of Technology in Chicago as an Assistant Professor of Naval Science. One of the collateral duties assigned to us was as a CACO (Casualty Assistance Call Officer). One of the cases assigned to me was that of a mother of a Navy flyer listed as an MIA. As it turned out, that flyer was Lt. Richard C. Deuter USNA 67 who was a classmate of mine from USNA. I had known him casually, having had several academic courses together. I got to know his mother very well and every Christmas I would bring my kids with me to give her some Christmas cookies. I stayed in touch with her every month for three years. When the “Peace Treaty” was signed in 1974, I was directed to go and inform her that Dick was not on the list of POW’s handed over by North Viet Nam and that he was most likely KIA. I remember having to go on a Saturday night and wake her up to share this terrible news. She was always so hopeful that he was alive. I’ll never forget holding this sobbing woman in my arms after she received the news. She was very appreciative, however, that she received the news from a classmate and someone that knew him. This story always reminds me that, indeed, we are a Band of Brothers.

I served with Lt. Deuter as a Plane Captain in VA-196. I actually have some film footage of him. I remember each time when we lost an aircraft, and I remember when his plane went down. It was always traumatic and sobering for all of us. While I didn't know him closely, I got to know his personality and his dedication to his mission. It was a fearful time for all the Pilots, flying into Laos, and he symbolizes the courage, determination, and patriotism of all the Navy pilots in the Vietnam War. God Bless Richard C. Deuter. SALUTE! ROBERT W. WRIGHT, WRIGHTY48@COMCAST.NET, 12/31/15

Dick & I were classmates, shipmates, and squadron mates in VA-196. I agree that November 22, 1969 was one of MY worst days too. Our squadron lost two aircraft that day, with only one crewman (Dick's pilot, CDR Lloyd Richards) recovered. Dick was a good friend, both in VA-196 and during our training in VA-128. We saw his wife Susie in Palo Alto a few years after Dick was lost, but have not heard from her since.... PETE YOUNG, 5/26/03

Dick and I went through VT-10 together in Pensacola. We both received orders to A-6s but Dick got orders to Whidbey Island and I received orders to Nas Oceania. We wanted to switch orders because Dick or his wife had family on the East Coast and I wanted to go to the West Coast. The detailers wouldn't switch our orders because they had already been written. I was attached to VA-85 on the Connie when we received word that VA-196 had lost two birds over Laos and Dick was in one of them. We had already lost a Phantom in Laos that day and only one of the crew had been rescued. 22 November 1969. Worst day of my life! To this day I think about how different things might have been if we had, in fact, switched orders. Thank you Dick for your Service and Sacrifice to our great country. MICHAEL J MUNSON, 5/21/03

I was in Richard's class at what was then known as "Banana School" at NAS Pensacola in 1967. He and his wife were both first class people and in fact she visited with my wife at the hospital when my son was born. The small gift she presented Carol at the time has been treasured for all these years. We will never forget those two fine individuals and we seriously regret having lost track of Dick's widow... we have often wondered if she returned to Germany or stayed in the U.S. James Hankins, festus@iland.net, March 22, 2008

He was survived by his wife, Susie.

Richard is one of 34 members of the Class of 1967 on Virtual Memorial Hall.

The "category" links below lead to lists of related Honorees; use them to explore further the service and sacrifice of the alumni in Memorial Hall.
Retrieved from "http://usnamemorialhall.org/index.php?title=RICHARD_C._DEUTER,_LT,_USN&oldid=132901"
Categories: