Frank Rutherford Marston was admitted to the Naval Academy from Florida on August 24, 1912 at age 19 years 8 months. 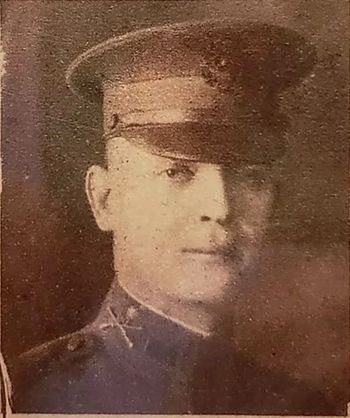 Frank was lost on July 15, 1918 he is buried in the Oise-Aisne American Cemtery at Fere-En-Tardenois, France.

He was a member of the 30th Infantry Regiment. This regiment was heavily engaged with the Germans in the Second Battle of the Marne at this time; it was a part of the 3rd Infantry Division. He was an infantry officer.

He was survived by his parents and his sister, Florence, and a younger brother who was at the time in training in Texas for army service. He was a native of Pensacola, Florida.

Frank listed on the killed in action panel in the front of Memorial Hall.

Several of Frank's letters and other keepsakes from his travels are in the collection of the UWF University Archives and West Florida History Center.

Frank was a Lieutenant in the initial casualty list. He is also listed as a 1LT in the Army Officer Register of 1918. He is not included in the 1916 edition of that publication. (There is no digitized version of the 1917 edition.)

He reported in a letter to his mother that he had been promoted to Captain, and is identified at this rank in the description of the Frank Marston Post of the American Legion, Pensacola, Florida.

Frank is one of 16 members of the Class of 1916 on Virtual Memorial Hall.

The "category" links below lead to lists of related Honorees; use them to explore further the service and sacrifice of the alumni in Memorial Hall.
Retrieved from "http://usnamemorialhall.org/index.php?title=FRANK_R._MARSTON,_CAPT,_USA&oldid=110284"
Categories: