Steve did not graduate; it's unclear why he left the Naval Academy, but it was sometime after the beginning of his 3/c year. 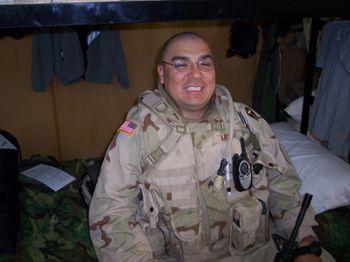 From the Associated Press via the Military Times:

DALLAS — From the time he finished high school, Sgt. Steve Morin Jr. made serving in the military his career, his family said.

“He always stood up for what he thought was right,” Gwendolyn Michelle Morin, his wife, said Thursday. “He was a fighter. He would never give up.”

On Wednesday, the Arlington soldier was killed west of Umm Qasr, Iraq, when an improvised explosive device went off, overturning the military vehicle in which he was riding, the Defense Department announced Thursday.

Gwendolyn Morin said she had talked to him about four hours before he died.

“He had called me to let me know what he was going to do that day,” she said. He expected to be able to call her more often because of the missions he was being assigned. Sometimes they would go 11 or 12 days between calls.

Morin told his wife how much he loved her and their family.

“We had our whole lives ahead of us,” she said. “He had so much potential. He was intelligent and determined.”

Morin enlisted in the Navy after graduating high school in his hometown of Brownfield at 17. By 34, Morin had devoted 14 years to the Navy, served in the National Guard for two and planned to attend Officers Candidate School.

“He’s very strong willed, very determined. Humorous, a clown, but he was also very disciplined and very passionate about what he believed in,” Gwendolyn Morin said. “He always wanted to serve his country.”

Morin was still in the Navy when he met his wife. At the time, the two were working for a photo company; he was Santa Claus and she was an elf, she said. Both were attending Texas Tech University.

“It was funny because we always kept running into each other. He would hang outside my classes and wait for me with a Diet Coke,” recalled Gwendolyn Morin, a stay-at-home mom and social work student. “He knew how to make me really happy.”

Steve Morin went on to earn a degree in economics and another in finance with honors. The couple married in 1999 in Brownfield.

Morin was expecting to attend Officers Candidate School when he was called up for duty last year. He had been deployed in January.

In addition to his wife, Morin is survived by a 6-year-old son, Esteban, and 12-year-old daughter, Brianna, as well as his parents, Steve and Audrey Morin of Brownfield, a sister and a brother.

He is buried in Texas.

Steve enlisted into the Active Navy in September of 1989, serving in several Navy assignments including the Navy Academy before joining the Texas Army National Guard. He considered himself a "Regular Guy". He was a very witty, fun loving person with integrity and respect for others. Loved his country and had a protective nature which was why he helped many young men adjust to military life. He was loyal, considerate, energetic, and had a good sense of humor. Being very positive, he would always be smiling. He loved football, fishing, but most of all he loved spending time with family. He joined the Navy right after graduation and never looked back, service to his country was his goal. He gave his all on Sept. 28, 2005. He will not be forgotten.

Area Texas National Guardsmen, who began training at Fort Hood in August for deployment to Iraq next year, were given a four-day break for Thanksgiving. The 3,000 men and women of the 56th Brigade, part of the Texas National Guard’s 36th Infantry Division, are expected to serve in Iraq for at least one year.

In south Arlington, Staff Sgt. Roger Vega watched football with one arm around his wife, trying to share a little attention with each of his eight children, ages 5 to 14.

Sgt. Steve Morin, 33, of Arlington is less concerned about the dangers in Iraq than the effect his absence will have on his family.

“My son gets upset when I’m gone for two weeks for summer training,” said Morin, whose family was celebrating Thanksgiving at Vega’s home. “He keeps telling me that if I see a bullet to move out of the way. So he knows there is danger.”

Steve is one of 5 members of the Class of 1997 on Virtual Memorial Hall.

Retrieved from "http://usnamemorialhall.org/index.php?title=STEVE_MORIN,_JR.,_SGT,_ARNG&oldid=136503"
Categories:
This page was last modified at 10:11 on 14 January 2021.
About USNA Virtual Memorial Hall