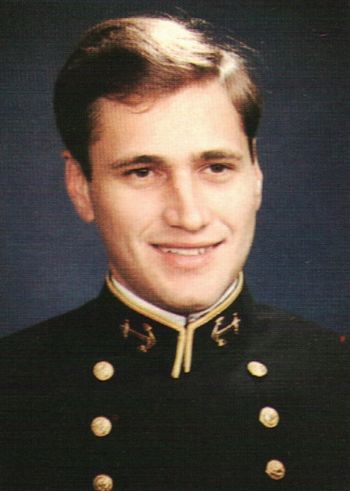 Commander Vauk was born in Nampa, ID, and graduated from Nampa High School. He was commissioned with the Class of 1987 with a bachelor’s degree with a major in political science. Following nuclear power training, Commander Vauk served aboard GLENARD P. LIPSCOMB and OKLAHOMA CITY. He retired from active service in 1993 in favor of the Naval Reserve. Lieutenant Vauk worked for Johns Hopkins University Applied Physics Laboratory while obtaining a master’s in Business from the University of Maryland. Commander Vauk was serving the second day of his annual Reserve duty at the Pentagon on 11 September.

A Mass of Christian burial for Ronald James Vauk of Mount Airy, who was killed at the Pentagon on Sept. 11, will be offered at 12:45 p.m. Saturday at the Arlington National Cemetery Memorial Chapel.

Mr. Vauk, 37, was beginning two weeks of annual active duty for the Naval Reserve and serving as watch commander in the Naval Command Center at the Pentagon when a hijacked plane struck the building. Since 1997, he had been an assistant group supervisor in submarine technology at the Johns Hopkins University Applied Physics Laboratory in Laurel.

Born In Nampa, Idaho, Mr. Vauk was a 1987 graduate of the Naval Academy, where he earned a degree In political science. He served on the submarines USS Glenard P. Lipscomb and the USS Oklahoma City, attaining the rank of lieutenant commander and receiving several medals and commendations. After about seven years of active duty, he entered the reserves and began working for Delex Corp. in Tyson's Corner, Va., where he was project manager for naval contracts.

He is survived by his wife of 14 years, the former Jennifer Mooney, who is expecting a child in November, and their 3-year-old son, Liam; four brothers, Charles Vauk of Boise, Idaho, David Vauk of Nampa, Gary Vauk of Grapevine, Texas, and Dennis Vauk of Houston; and four sisters, Teri Mas-terson of Carson City, Nev., Celia Shikuma of Huntington Beach, Calif., Lynne Caba of Nampa and Patricia Vauk of Minneapolis.

A Ronald James Vauk Memorial Fund for his wife and children has been established in care of First Mariner Bank, 1801 S. Clinton St., Baltimore 21224.

....Twists of fate that morning made the death of Lt. Cmdr. Ronald Vauk especially cruel: His annual stint at the Pentagon had been scheduled for later that year, but he worked out a switch to be free for his daughter's birth in November. When Megan was born, Pat Vauk traveled to Baltimore to see her new niece and her nephew Liam, 3, now a fatherless family.

"My brother was funny, always the life of the party, a smart aleck, very lively" (Pat) Vauk said. "And, oh my god, his son is just like him. He's good in math, very engineering-oriented, extremely smart, just about the spitting image of his dad in every way. And a complete smart aleck. It's freaky."

Ronald is one of 5 members of the Class of 1987 on Virtual Memorial Hall.

The "category" links below lead to lists of related Honorees; use them to explore further the service and sacrifice of the alumni in Memorial Hall.
Retrieved from "http://usnamemorialhall.org/index.php?title=RONALD_J._VAUK,_LCDR,_USNR&oldid=106157"
Categories:
Hidden category: