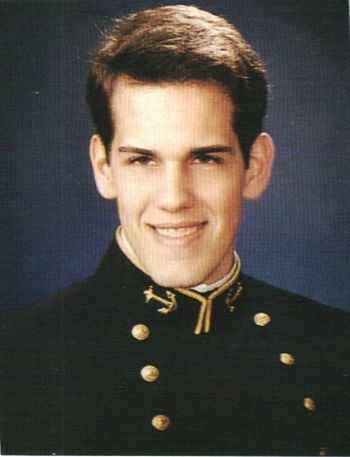 ....Metcalf, a 1985 graduate of the Naval Academy, had wanted to go to the Persian Gulf to join his buddies.

"That was our main concern," said Metcalf’s aunt, Rose Mari Petti of West Palm Beach. "Then this had to happen. He wanted to go. He was very upset. All his friends were over there..."

"They were making plans for his wedding," she said. His fiancee, Sheila Gerberick, lives in Corpus Christi, Texas.

His father, Ned W. Metcalf Sr., an Air Force lieutenant, was killed in traffic accident 17 years ago on a base in San Antonio.

"He was a very responsible person," Petti said of her nephew. "He was everything you wanted him to be especially to his mother."

"He always wanted to fly," Petti said. "That's all he ever wanted to do."

Ned was from Sarasota, Florida.

Ned is one of 5 members of the Class of 1987 on Virtual Memorial Hall.

The "category" links below lead to lists of related Honorees; use them to explore further the service and sacrifice of the alumni in Memorial Hall.
Retrieved from "http://usnamemorialhall.org/index.php?title=NED_W._METCALF,_JR.,_LT,_USN&oldid=106155"
Categories: