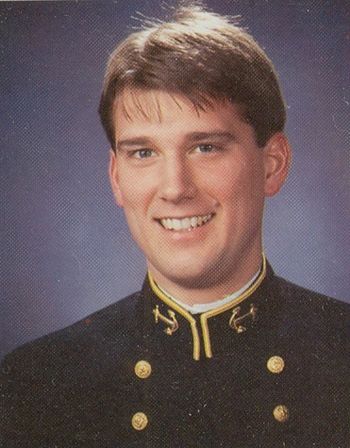 The collision occurred as one P-3 Orion was arriving to relieve the other, which had just completed its part of the exercise, Howard said. Officials were uncertain how much contact the pilots had before the crash, he said.

Martin is listed as being 27 years of age and from Oklahoma City, Okla.

Lt. j.g. Martin "Brad" Cox of Oklahoma City was recommended for a rare "'accelerated promotion" just weeks before he and 26 other sailors died in a two-plane collision last week, his uncle said Monday.

Richard C. "Dick" McDonald of Bartlesville told several hundred mourners that Cox, 27, "gave his life in the service of our country."

Cox was killed Thursday in the collision of two Navy P-3 Orions on a training exercise over the Pacific Ocean about 60 miles southwest of San Diego. The Navy abandoned the search Sunday without finding any survivors.

McDonald, who is retired from the Navy, briefly detailed Cox's youth in Oklahoma City.

McDonald said Gayle Cox found her son's Feb. 28 performance report last week when she went to California during a Navy search for the missing sailors.

Having been in the Navy, McDonald said he recognized that Cox's squadron commander used "some key words"' in the report.

"Trusted leader" was one of the phrases that was used," he said.

McDonald said the commander also wrote that Cox "is an outstanding aviator with a gift for mastering complexities. He is the finest first-tour aviator in the squadron."

"He saved for last some words that are rarely written in these performance reports," McDonald said.

"The words are, 'recommended for accelerated promotion.' Now that is Navy shorthand for 'this man is destined to be an admiral,' "he said.

McDonald said that each year the Navy is permitted to promote only 5 percent of its officers ahead of the others. He said that in his experience, it is "almost unheard of that a lieutenant junior grade is recommended for accelerated promotion."

McDonald said the memorial service at First Presbyterian Church in Oklahoma City was to "honor this man with hope and with the knowledge that he was doing a good thing." About 150 people at tended the service.

McDonald recalled that shortly after Cox finished training to become a naval hospital corpsman. he apparently saved the life of a sister while he was home on leave.

Cox discovered his sister Jennifer was ill late one night, he said. "And with this fresh training that he had, fortunately, he recognized that it was more than just an illness: he saw her in great trauma," he said.

Cox had his sister taken immediately to the hospital where she was diagnosed as having toxic shock syndrome, he said. "Had he not done this, she probably would have died by morning," McDonald said.

When Cox graduated from Classen High School in 1982, he received the Classen Medal of Honor for citizenship and scholastic achievement, McDonald said.

After graduation, Cox joined the Navy and later "applied for a fleet nomination to the Naval Academy," he said. Although the Navy sends fewer than 100 sailors to the academy each year, Cox got the appointment in 1984, he said.

In 1988, Cox received a bachelor of science degree in aeronautical engineering from the Naval Academy and married Lisa Marie Ford in Fairfax, Va., McDonald said.

Cox took the first part of his flight training at Pensacola, Fla., and then went to Corpus Christi, Texas, where he trained in multi-engine flight, he said. "There he received his wings as a naval aviator -- first in his class."

Then he went to Patrol Squadron 50 at Moffett Naval Air Station near San Francisco where he learned to fly the P-3 Orion, a four-engine turboprop airplane used to hunt submarines.

"Four months ahead of his contemporaries at Patrol Squadron 50, he qualified to pilot the P-3 Orions," he said.

Two other Oklahomans also died in the crash of the P-3 Orions, Lt. j.g. Jay A Williamson, 27, of Moore and Petty Officer 2nd Class Francis A. Sposato, 30, of Tulsa.

From the October 1991 issue of Shipmate:

Lt (jg) M. Bradford Cox, USN, was killed in a P-3 mid-air collision on 21 March 1991 while flying a training mission off the coast of San Diego.

Brad was born 19 January 1964. After attending the Naval Preparatory School, he was appointed to the U.S. Naval Academy with the Class of 1988.

He graduated from the Academy 25 May 1988 and married the former Lisa M. Ford of Fairfax, Virginia on 27 May 1988. Brad received his Naval Aviator Wings 15 December 1989 at NAS Corpus Christi. He was assigned to VP-31 Training Squadron in January 1990 and to VP-50, NAS Moffett Field in July 1990. He was assigned the duties of Aviator's Equipment Branch Officer

He has a marker in Arlington National Cemetery.

Martin is one of 8 members of the Class of 1988 on Virtual Memorial Hall.

The "category" links below lead to lists of related Honorees; use them to explore further the service and sacrifice of the alumni in Memorial Hall.
Retrieved from "http://usnamemorialhall.org/index.php?title=MARTIN_B._COX,_LTJG,_USN&oldid=130009"
Categories: