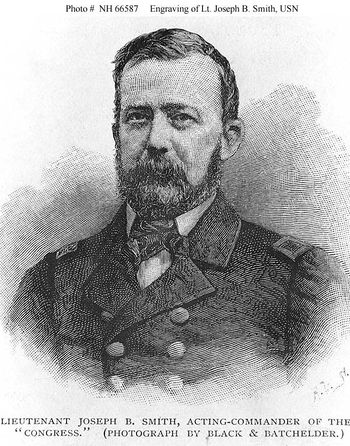 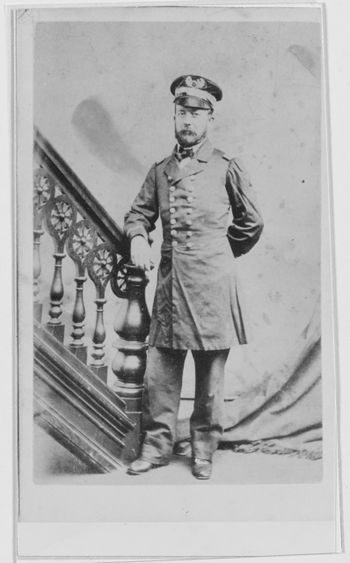 On March 8, 1862, Lieutenant Smith was Executive Officer of USS Congress when he was killed defending his ship against the Confederate ironclad CSS Virginia (formally USS Merrimack). He previously served on the Merrimack before she fell into Confederate hands. Joseph Bryant Smith was born in Belfast, Maine, on December 29, 1826 to Rear Admiral Joseph Smith USN and Mrs. Harriet (Bryant) Smith. He was appointed to the United States Navy in 1841. On October 19, 1841, he entered the Navy as a Midshipman. Later, he entered the Naval School in Annapolis Maryland at its founding in 1845. Midshipman Smith graduated 33 of 136 Midshipman from the United States Naval Academy on August 10, 1847. Passed Midshipman Smith served at the Washington Navy Yard, in USS Mississippi and with the United States Coast Survey.

On August 22, 1855, Passed Midshipman Smith was promoted to Master.

On September 14, 1855, Master Smith was promoted to Lieutenant.

In 1857, Lieutenant Smith was assigned to the steam frigate USS Merrimack. Recommissioning September 1, 1857, Merrimack got underway from Boston Harbor on October 17, 1857 as flagship for the Pacific Squadron. She rounded Cape Horn and cruised the Pacific coast of South and Central America until heading for home November 14, 1859. Lieutenant Smith next had ordnance duty at the Washington Navy Yard, D.C.

In 1859, Lieutenant Smith joined USS Congress as First Lieutenant. Congress was reassigned as flagship of Commodore J. Sands and the Brazil Squadron, remaining in that area until the Civil War precipitated her return to Boston on August 22, 1861.

On September 9, 1861, she was ordered to duty under command of Captain Goldsborough in the Atlantic Blockading Squadron, later to serve under Commander W. Smith, and now Executive Officer Lieutenant Smith.

On January 13, 1862, Colonel D.W. Wardrop and his company “D” Union Coast Guard, Ninety-ninth Regiment, New York State Volunteers were assigned to the USS Congress. Congress that same day paid and discharged over 300 of her crew. The Army took over and practiced on the big guns. The Congress’ remaining officers and men were about two hundred and seventy.

On March 8, 1862, Congress was anchored off Newport News, Virginia, when she fell under attack by the Confederate ironclad, CSS Virginia (former USS Merrimack) and five other small ships. Lieutenant Smith was in charge of the ship during the Commanding Officer's absence when she was attacked and destroyed by ironclad Virginia. After the Virginia steamed out to attack the Union Navy ships that were blockading the James River, it destroyed the USS Cumberland before setting its sights on the Congress. Lieutenant Smith was acting commander of the vessel that day, and directed the ships defense in the battle, which was a one-sided affair, as the cannon fire from the Congress bounced off the Virginia’s iron plated hull, while the Confederate ship’s fire tore the wooden warship apart.

At about 1330, the Virginia opened fire upon the Congress with her two bow guns as she passed up the James River and then gave Congress a broadside from her four guns as Congress replied with her starboard battery and stern guns.

As the Virginia was approaching the Cumberland, Lieutenant Smith could not get the ship to swing on her cable and decided to slip her anchor and attempted to set sail but in the shallow water she ran aground. The Virginia, having sunk the Cumberland, maneuvered into a raking (through the length of the ship) position of the Congress about 100 yards from her stern. She commenced a rapid and most destructive fire with shot and shells into the Congress, breaking the muzzle of one and dismounting the other of Congress’ stern guns.

After the Congress took great casualties, Lieutenant Smith continued to direct the fight until a piece of Confederate artillery decapitated him.

At that time Congress’ flag was ordered lowered. The Confederate’s continued fire upon the Congress, so a white flag of surrender was hoisted up the main mast. A Confederate tug CSS Beaufort came alongside. An officer boarded Congress and ordered the men ashore, said he would take officers and burn the ship, and seemed unwilling to wait for the wounded to be taken off.

Lieutenant Smith’s body was taken off the ship while Confederates were taking prisoners.

He is listed on the killed in action panel in the front of Memorial Hall. He is buried in Washington, D.C.

The Register of Alumni does not have a date of his loss.

Joseph is listed as "Joseph B. Smith" on the killed in action panel in the front of Memorial Hall; this should include his middle name, Bryant.

Midshipman, Delaware, 74
Others at this command:
MIDN Thomas Brodhead '47

Joseph is one of 32 members of the Class of 1847 on Virtual Memorial Hall.

Retrieved from "http://usnamemorialhall.org/index.php?title=JOSEPH_B._SMITH,_LT,_USN&oldid=138086"
Categories:
Hidden category:
This page was last modified at 15:59 on 16 April 2021.
About USNA Virtual Memorial Hall