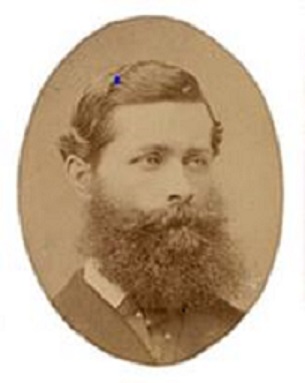 William was lost sometime after September 21, 1854 when USS Porpoise (1836) disappeared between Formosa and China.

He was born in Washington, D.C. and appointed to the Naval Academy from Maryland. Year of birth (1830) is approximate.

They had a son, William Van Wyck Reily, born December 1853 in the District of Columbia.

2nd Lt. William Van Wyck Reily was killed with Lt. Col. George A. Custer’s battalion at the battle of Little Bighorn in June 1876.

William's son, William Reily '75, whom he never met, was killed in the battle at Little Bighorn. The son was named for his classmate and shipmate, William Van Wyck '47.

Others at this command: MIDN Joseph Smith '47 and MIDN Thomas Eaton '47.

Others at this command: MIDN Thomas Eaton '47.

Others at this command: MIDN William Van Wyck '47.

Others at this command: PASSED MIDN William Bridge '47.

Others at this command: PASSED MIDN Sylvanus Bliss '47.

William is one of 31 members of the Class of 1847 on Virtual Memorial Hall.

The "category" links below lead to lists of related Honorees; use them to explore further the service and sacrifice of the alumni in Memorial Hall.
Retrieved from "http://usnamemorialhall.org/index.php?title=WILLIAM_H._REILY,_PASSED_MIDN,_USN&oldid=109295"
Categories: