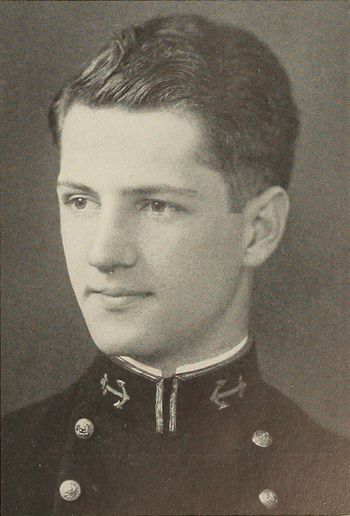 The Green Mountains lost another good Republican when Eric came to Annapolis. He admits he was headed for the ministry, but finished by casting his lot with Uncle Sam and has not regretted his choice. An infectious grin and an irrepressible sense of humor put him at ease anywhere, and though self-styled a misogynist, has always been ready to drag for a friend. Well known for his famed shower rendition of "Danny Deever," nevertheless he has a pleasing voice and choir and Glee Club always found him present. Around the pool, Eric and unorthodox dives were synonymous, but the sub-squad remembers him as the easiest man to save. Always a good roommate, even to his last clean gloves—may we someday be shipmates.

The Green Mountains lost another good Republican when Eric came to Annapolis. He admits he was headed for the ministry, but finished by casting his lot with Uncle Sam and has not regretted his choice. An infectious grin and an irrepressible sense of humor put him at ease anywhere, and though self-styled a misogynist, has always been ready to drag for a friend. Well known for his famed shower rendition of "Danny Deever," nevertheless he has a pleasing voice and choir and Glee Club always found him present. Around the pool, Eric and unorthodox dives were synonymous, but the sub-squad remembers him as the easiest man to save. Always a good roommate, even to his last clean gloves—may we someday be shipmates.

Son of Rev. Eric Allen, Sr. who resided in Manchester, Vermont during the war.

He resided in Fairfield County, Connecticut prior to the war.

During the attack on Pearl Harbor the Enterprise, which was not at Pearl Harbor, dispatched a force of Six Wildcats which escorted a strike force consisting of 18 Torpedo Six TBDs, and six VB-6 Dauntlesses fitted with smoke generators to mask the TBDs as they approached their targets. Their mission was to locate Japanese Aircraft carriers that had launched the attack on Pearl and engage them.

Unable to locate the Japanese the 18 Torpedo Six TBDs and the six VB-6 Dauntlesses were told to return to the Enterprise. The six Wildcats were directed to continue on to Pearl Harbor and render any assistance as necessary.

As the 6 Wildcats approached Hickam Field near Pearl Harbor their arrival there triggered a panic, even though the message of their arrival was repeatedly broadcast, and they were fired upon by ground anti-aircraft fire.

ENS Herbert H. Menges immediately fell victim to the anti-aircraft fire and crashed. He has since been noted as the first Naval fighter pilot to die during World War II.

LTJG France F. Hebel's fighter was shot down next and crashed near Wheeler Field. He had suffered a skull fracture during the crash and died.

LTJG Eric Allen, Jr., after being shot while still in his aircraft, bailed out at a low altitude over Pearl Harbor and suffered internal injuries. He landed in the oily water near the mindsweeper Vireo (AM-52) and later succumbed to his injuries.

ENS James Daniels was the only one of the six airmen to land on an airfield proper (Ford Island Naval Air Station).

ENS Gayle Hermann set down on a small golf course on Ford Island.

ENS David Flynn's F4F apparently ran out of fuel, forcing him to parachute into a cane field near Barbers Point.

With a loss of three pilots and four aircraft, 7 December 1941 saw VF-6's worst casualties through June 1942.

Eric was originally interred in the Halawa Naval Cemetery, Oahu and was later re-interred here on January 26, 1949.

Allen was hit immediately. He bailed out, but was hit by a .50-caliber shell on the way down, his parachute only partially opened. Allen swam through oily water to minesweeper Vireo (AM-52), but died of severe wounds the next day.

Eric's father was listed as next of kin. 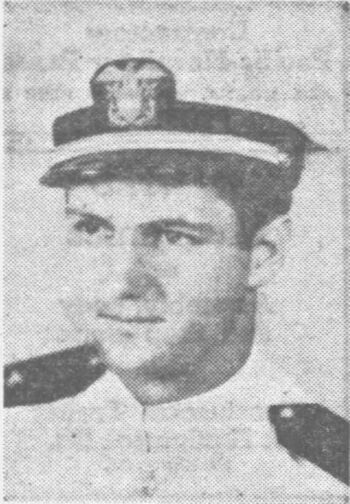 From The Honolulu Advertiser on November 24, 1941. "In a USO arranged concert on Oahu in November 1941, Eric was called the Nelson Eddy of the Navy."

Eric graduated in 1933 from Burr & Burton Academy in Manchester, Vermont. He played the difficult part of Bernard Ingals in the senior play "The Goose Hangs High." Prophecy for later life: Admiral in the Navy. In the Jokes section: Eric Allen (giving algebra problems from memory): "A's age 4 years ago was 3-2 of B's age. Four years hence A's age was 19-11 that of B." What Would Happen If: Eric Allen didn't ramble.

According to the Deerfield Valley Times, Wilmington, Vermont, on June 20, 1941, Eric saved a fellow navy flier off the California coast. Eric "swam some 300 yards through breakers to rescue Lieut. F. T. Corbin, who had crashed into the sea off the North Island Air station near San Diego. Ensign Allen, aloft in another plane, saw the accident and hastily landed his craft on North Island. Plunging into the surf, he swam to the scene and brought Lieut. Corbin back to shore, uninjured."

When Eric was killed, his parents were living in La Jolla, California. His father had been a minister of the Congregational Church in Manchester for eight years. His brothers were James ('42) and Benjamin, and his sisters were Sally and Patricia.

Passing through the woods and fields, one observes many things. He hears a noise in a tree which he may recognize as that of a bird of the air or a squirrel of the land. He sees myriads of animals which he may or may not recognize. All the varying aspects of nature challenge and develop a person's powers of observation. If he is a nature lover, he will take advantage of this and will be able to recognize all nature and other things by ear and eye.

A person who spends his time under open skies comes to understand and interpret the physical world in which he lives so that he is able to adjust himself to it. Thus a person walking in the woods can see a living tree and realize that if he is wasteful that tree must die. A little squirrel chattering in the tree tops is all too apt to die for the satisfaction of man's lust for killing or woman's desire for a fur coast. Perhaps the man may study and find that wild life loves to live and he will adjust himself to protect the wild and not wastefully destroy it.

If man protects and loves the woodland haunts, he will find that there are generous returns for hours spent far from the maddening crowd. He will be developed physically and mentally; he will have a heart overflowing with gladness brought on by a love for nature. He will thrill to the song of a bird, the splash of a fish as he throws his glistening body into the sunlight, and he will laugh at the antics of the stupid porcupine as he seeks refuse in a fifteen foot poplar tree. All in all he will be bountifully rewarded with joy for his hours spent close to the wild.

Life out of doors is associated with many wholesome games and hobbies. What would football, baseball, hockey, or hiking be without access to a free spot, unspoiled by man's hand. The astronomer and the botanist all look to the unspoiled parts of God's creations for their hobbies and activities; and what hobby is more wholesome or enjoyable than one which brings contact with the world works of the Lord.

The path of health leads out of doors. The tubercular patient seeks the out of doors; the fat one may climb mountains or preferably ride horseback to reduce; the weak man seeks the natural exercises to develop himself and finds that he can. In fact for every ill, mental and physical, there is a cure in nature.

In the forest the artist will find much to admire. The outdoor world gives man his most inspiring experience with beauty. One has but to look around us not to see beauty in every maple tree. The leaves are a gorgeous color inspiring to every painter; the huge pine trees sway majestically in the breeze; and even little birch trees seem beautifully pert as autumnal winds strip them of their leaves. The rippling brooks and bobbing rabbits even supply inspiration for poets. All nature expresses beauty which we cannot describe and which only God can create.

Ensign, USS Trenton
Others at this command:
ENS Edmundo Gandia '38

Ensign, USS Trenton
Others at this command:
ENS Edmundo Gandia '38

Eric is one of 72 members of the Class of 1938 on Virtual Memorial Hall.

Retrieved from "http://usnamemorialhall.org/index.php?title=ERIC_ALLEN,_JR.,_LTJG,_USN&oldid=138288"
Categories:
This page was last modified at 09:14 on 20 May 2021.
About USNA Virtual Memorial Hall