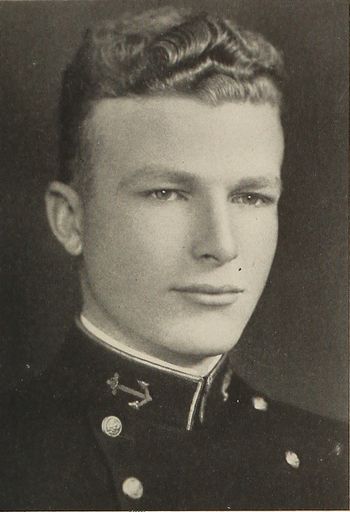 A superlative member of the class of 1938, Jimmy Tate, curly-haired and smiling, is one of our youngest classmates. Sometimes known as Bill and other times as Jim or Jimmy, he's always the same smiling sincere character. With eagerness and determination, Jimmy came directly to the Naval Academy from Forest Park High School in Baltimore. We are aware of Jim's sterling inheritance as a supple-bodied athlete, with Irish determination, and natural nautical interests. Perhaps his knowledge and ability in boat handling drew his interest to the Severn and to the long oars of crew. Too light to wield an oar with the Academy's six-footers, he was chosen as manager of crew early in his second class year. Although too light to participate in the major sports, he is their greatest supporter. Here is the portrayal of will and determination.

A superlative member of the class of 1938, Jimmy Tate, curly-haired and smiling, is one of our youngest classmates. Sometimes known as Bill and other times as Jim or Jimmy, he's always the same smiling sincere character. With eagerness and determination, Jimmy came directly to the Naval Academy from Forest Park High School in Baltimore. We are aware of Jim's sterling inheritance as a supple-bodied athlete, with Irish determination, and natural nautical interests. Perhaps his knowledge and ability in boat handling drew his interest to the Severn and to the long oars of crew. Too light to wield an oar with the Academy's six-footers, he was chosen as manager of crew early in his second class year. Although too light to participate in the major sports, he is their greatest supporter. Here is the portrayal of will and determination.

William was lost when his aircraft crashed into the Chesapeake Bay while testing large caliber bombs from a fighter. (See Distinguished Flying Cross citation below.)

From researcher Kathy Franz: "His wife was Helen, and he had a small son. His father was Navy, Lt Commander in WWI. Mother was Mary."

A map of the path traveled by William and his crewman following their crash.

At 2200 on Oct. 11 1942 W. J. Tate Jr., Lieut. and Claude W. Morgan, ARM1c were catapulted from the USS Salt Lake City about nine miles off West Cape, Guadalcanal. It was a dark night and the ground crew had loaded extra flares in the rear cockpit lengthwise instead of athwartship as instructed.

The acceleration experienced when the aircraft was catapulted caused the flares to fall out of their storage, setting the tail of the plane on fire. It never got above 200 feet, and within seconds the fire was spreading through out the entire aircraft. Morgan had to immediately crawl out of the rear seat onto the wing and Tate couldn't see the water, horizon or even the instrument panel, He gunned the engine two or three times trying to blow the fire out and eased down toward the water trying to land in a cross wind.

The airplane hit the water right wing down and didn't bounce, throwing Morgan clear, however he received a bad cut over one eye and a wrenched shoulder. The plane was still on fire and Tate was out on the wing before his head began to clear, he did not remember unbuckling his safety belt or climbing out of the cockpit. He suddenly became afraid that the gas tanks might explode, so he swam over to join Morgan and together they swam about 200 feet clear of the aircraft. They tried to signal the ship with a pencil light but didn't have any luck.

The fire burned for about seven more minutes before the plane turned over and put it out. They swam back to the plane, Morgan held onto the tail trying to relax the pain in his wrenched shoulder while Tate extracted the life raft, it took about 10 or more dives down to the compartment it was stowed. The life raft had survived the fire and inflated properly, which was a good thing as Tate had torn up his life jacket so badly extracting the raft, he had to throw it away. He also got gasoline, that was floating on the surface of the water, in his eyes and swallowed some which immediately made him sick.

They climbed into the raft and started paddling away from the plane toward the west end of Guadalcanal, as enemy troops were all along the shore where they now were and it would be impossible to land and walk to Lunga. About 2330 they witnessed the battle of Cape Esperance. It appeared to them as though three groups of ships, with our ships in the middle and shooting in both directions.

It got very cold that night, even though they were fully clothed, except Tate had discarded his helmet and gloves which later proved to be a mistake, at daylight they were about five miles off West Cape. For provisions they had five bottles of Horlick's malted milk tablets and two gallons of water. Morgan had bought the canteen at a hardware store and Tate the malted milk tablets in Honolulu with their own money. This was all they would eat, except for floating coconuts they managed to fish out of the water, the next three days.

The first day they continued paddling, keeping about six miles off shore hoping to be spotted by some of our planes looking for survivors, but no such luck, even though six planes flew directly four hundred feet overhead on a strafing run toward Japanese targets. To the north a destroyer and some planes could be seen picking up survivors from the destroyer SS Duncan, which was our only ship sank in the battle of Cape Esperance.

Life in the raft was always wet as waves would slop in and they could never get completely dry. It was cold at night and hot during the day. Tate had to remove his underwear, tear it up and cover his head, face and hands to protect them from the sun and help warm them at night. His hands and face was tender from the gasoline burns received while diving to get the raft out of the airplane, he now wished he hadn't discarded his helmet and gloves. Morgan's wrenched shoulder and cut above his eye seemed to get better with time.

The second day they found a dugout canoe with a hole in it, patched it up and tried paddling it towing the raft. It went faster but was so delicately balanced and difficult they went back to the raft. By afternoon they managed to get around the west tip of the island and a fresh wind came up which eased the burden of paddling but blew them within a half mile of the shore. A Japanese sniper opened up on them and they promptly went overboard. He fired about 10 rounds but the closest landed about six feet away. The swimming cooled them off and they felt much better. As they paddled away they noticed a number of power boats and barges badly damaged on the beach. That evening another rubber boat could be seen coming from Savo island which started chasing them, it was some Japs bringing back fruit and vegetables so they easily out distanced them. Tate and Morgan had only a sheaf knife and five pen knives, they wouldn't have been much of a match for anyone with a gun. The Japs didn't fire at them but one from Visale, on Guadalcanal, tried his luck but didn't come very close.

Early on the third night ships started firing at Lunga and received answering fire from shore. Later three Destroyers passed just east of Savo island and a few minutes later a Japanese destroyer came around the west side headed straight toward the two men in the raft. They held their breath and just before it got to them the destroyer veered off but still passed so close, Morgan and Tate could hear them talking. It was doing ten or twelve knots and came close enough to nearly swamp their raft even though it was a calm sea that night.

Shortly after a large campfire and light appeared on the beach, obviously to give navigational aid to the Japanese, as ships started bombarding Lunga beach. They received return fire than swung toward Tulagi and fired briefly and retired to the north. They were accompanied by a Japanese battleship and as soon as they retired the large campfire and light on the beach went out.

On the last day both men felt quite sick from the sun but kept paddling toward Lunga, their progress became difficult as a southwest wind necessitated that one to bail out water as the other paddled. All day the two men in the raft watched our planes bomb Japanese positions but finally turned toward shore, and right in the nick of time! A Higgins boat spotted them and picked them up. For the two men in the raft the Battle of Cape Esperance lasted sixty seven hours and covered fifty miles. 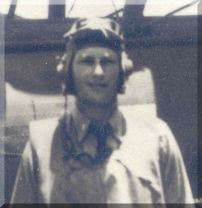 The President of the United States of America takes pride in presenting the Distinguished Flying Cross (Posthumously) to Lieutenant William J. Tate, Jr., United States Navy, for extraordinary achievement while participating in aerial flight as Test Pilot and Gunnery Officer attached to the Armament Test Department at Naval Air Station, Patuxent River, Maryland. Lieutenant Tate carried out extremely dangerous work of testing mines and bombs. Throughout his intelligent analysis of test data, he made important contributions to the effectiveness of naval aviation and the future safety of naval aviators. He was killed on 13 April 1944 while making tests to determine safe angles of dive for fighter planes carrying large caliber bombs.

Others at or embarked at USS Salt Lake City:

William is one of 72 members of the Class of 1938 on Virtual Memorial Hall.

The "category" links below lead to lists of related Honorees; use them to explore further the service and sacrifice of the alumni in Memorial Hall.
Retrieved from "http://usnamemorialhall.org/index.php?title=WILLIAM_J._TATE,_JR.,_LT,_USN&oldid=122095"
Categories: