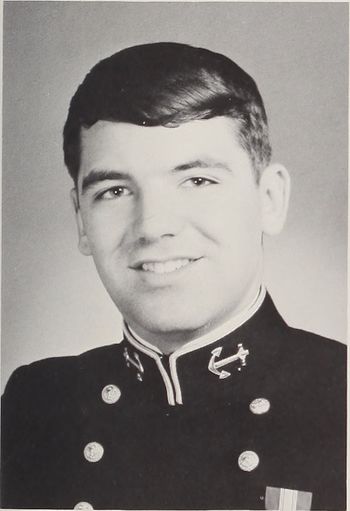 The Crimson Tide lost one of its most devoted sons when Ketch decided to begin his self-imposed imprisonment behind the cheerful grey walls of the Academy. Scott undoubtedly broke more than his share of young female hearts while at the Academy. The local lasses never had a chance with the Ketch, however, due to a O. A. O. back in BAMA. Athletically Scott was a plebe pitcher and a regular on the company football and soccer teams. While spending endless hours teaching his roommate the mysteries of electrical science, Scott still managed to regularly place his name on the Supt's List. Scott's genuine sense of humor and easygoing disposition will undoubtedly aid him m becoming the finest of officers.

He was also a member of the 2nd Regiment staff (fall).

The Crimson Tide lost one of its most devoted sons when Ketch decided to begin his self-imposed imprisonment behind the cheerful grey walls of the Academy. Scott undoubtedly broke more than his share of young female hearts while at the Academy. The local lasses never had a chance with the Ketch, however, due to a O. A. O. back in BAMA. Athletically Scott was a plebe pitcher and a regular on the company football and soccer teams. While spending endless hours teaching his roommate the mysteries of electrical science, Scott still managed to regularly place his name on the Supt's List. Scott's genuine sense of humor and easygoing disposition will undoubtedly aid him m becoming the finest of officers.

He was also a member of the 2nd Regiment staff (fall). 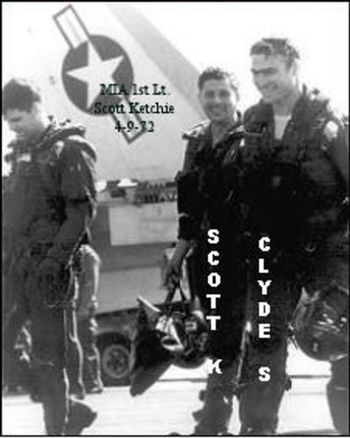 During the early evening of 09 Apr 1972 a VMA(AW)-224 A-6A (BuNo 155652) flown by Major Clyde D. Smith and 1stLt Scott D. Ketchie was flying a road interdiction mission in southern Laos just west of the DMZ. As Smith was prosecuting a truck convoy near Ban Bamran his Intruder was hit by AAA fire. Smith ejected from the aircraft at about 12,000 feet and was clearly visible in the fading sunlight as he parachuted to the jungle below.

By this stage of the war, the NVA troops on the ground knew just what to expect - a massive search-and-rescue effort by the Americans - and they knew also how to make the most of the opportunity to shoot down some of the SAR aircraft. The NVA established a perimeter around the area where Smith landed in order to use him as bait in a flak trap.

Although an Air Force HH-53 was in the area, there were no escorts on hand and therefore no immediate attempt could be made to rescue Smith before sundown. However, a combination of enemy anti-air activity and bad weather conspired against Smith, who was forced to evade capture for the next four days. On the 13, a well-planned and coordinated pick-up attempt was initiated, with Naval aircraft from two carriers providing strike and AAA suppression while an Air Force HH-53C from the 40th ARRS swooped in and picked Smith up while under fire.

Although Major Smith survived, and went on to command two Marine squadrons at MCAS Cherry Point before retiring in 1979, there was no sign of 1stLt Ketchie. He had not been seen to eject from the stricken Intruder and there had been no radio contact with him during the four days of the SAR effort. Even though there was no evidence that he had survived the initial shootdown, 1stLt Ketchie was carried as Missing in Action until the Secretary of the Navy approved a Presumptive Finding of Death on 05 March 1979. His remains have not been repatriated.

The following was submitted by Scott’s widow, Patti (Ketchie) Smith:

Scott grew up in Birmingham, Alabama, the only child of Bill and Mary Jane Ketchie. As the only grandchild in the family, he was adored by his grandparents. Scott easily made friends with his relaxed disposition, enthusiasm and fun sense of humor.

Scott graduated from the United States Naval Academy in June 1969. Upon graduation he married high school sweetheart Patti Wade, and a few days later reported to The Basic School (TBS) in Quantico, Virginia.

For the recent college grads, it was both an exciting and uneasy time of what was ahead. We were all so young, embarking on new journeys; happy for the time shared with other Marines and their families. Each assignment for Scott was a new adventure. He studied and worked hard – but always found time to have fun with friends and neighbors.

Upon sighting flames over his shoulder, the pilot motioned for 1st Lt. Ketchie to eject, and recalls 1st Lt. Ketchie reaching for the secondary ejection handle. That was the last time Scott was seen.

The pilot eluded capture and was rescued four days later. He could not verify whether Scott had ejected or received injuries. Search and rescue (SAR) activities were terminated on April 14, 1972, and 1st Lt. Ketchie was declared Missing in Action (MIA).

During the time Scott was carried as MIA, he was promoted to Captain. On March 5, 1979 the Marine Corps declared Scott as Killed in Action (KIA). A memorial service was held at Arlington National Cemetery, Virginia on July 9, 1979. Scott’s class ring, sword, navigator’s wings and decorations, including a Purple Heart medal, were donated to the Naval Academy. Scott would be proud to know his ring represents the Class of ’69 at Alumni House.

In 1992, during Joint Field Activity conducted by the United States and the Lao People’s Democratic Republic, a joint team reported no crash site near the last known location. Further review of SAR logs and an interview with the pilot determined the loss was ten kilometers south of the initial investigation. In 2001, an imagery review confirmed the actual crash site, which has since been located, investigated, and excavated. Possible human remains and life support equipment were recovered from what appears to be the correct crash site, but greatly deteriorated due to time and climate.

The Defense Intelligence Agency in Vientiane, Laos has been requested to follow up on possible remains alluded to by Lao nationals (“remains traders”) in a 2012 reporting. The Defense Prisoner of War/Missing in Action (POW/MIA) Accounting Agency (DPAA) Laboratory is to reassess potential for DNA analysis during 2019.

Scott’s plans for the future included returning to Alabama, attending law school, starting a family, and a new career. While these plans would never be realized, receiving an appointment to USNA was certainly a fulfilled goal. Scott was so proud to be a part of the Brigade of Midshipmen, Class of 1969 and to serve his country as a United States Marine.

All photos below taken from "The Legacy of the Class of 1969":

Scott and I were the youngest officers serving with VMA(AW)-224 Det C (Bengals) as a part of Carrier Air Wing 15 assigned to the USS Coral Sea, CVA 43. We were both (Grumman) A6 Intruder Bombardier/Navigators serving in the United States Marine Corps and our squadron was attached to a Navy unit.

Scott was a 1969 graduate of the U.S. Naval Academy who accepted a commission in the Marine Corps. He was a 1965 graduate from a high school in Ensley, AL (Birmingham). He married his H.S. sweetheart, Patty Wade in 1969. As we live in a "small world", I attended college with Patty at Samford University (outside Birmingham, AL). After 7 years in a "MIA" status there was an administrative "presumptive finding of death" for Scott. He or his actual fate remains unknown to this day. I believe a memorial "obituary" did appear in a Birmingham newspaper.

I grew up in Birmingham, and knew Scott and his family quite well. My mother, Mildred Landers, was a very close friend to his mom and grandmother, Connie Smith. It has been many years since we last saw them, but I still think of them with fondness. I wore Scott's MIA bracelet for several years. Our thanks to Scott for his courage and service to our country. DIANNE LANDERS FUQUA, DIANNEFUQUA@COX.NET, 2/26/04

My name is Tom Hens. I went through NFO flight school with Scott at NAS Pensacola and I believe we were together later at MCAS Cherry Point before he left for WestPac.

I came across your website today. Scott was a good man and I became friends with the triumvirate of friends from Alabama, Scott, Ron Gilbert (an RF-4C NFO) and Bob Jacobs (an F-4J RIO who was killed in an accident at the NATO base in Sigonella, Italy). It is still hard to believe that many friends of my service days are gone. I always hoped Scott would be found. Thomas R. Hens, thens1@excite.com, 26 May 2007

Scott is one of 17 members of the Class of 1969 on Virtual Memorial Hall.

The "category" links below lead to lists of related Honorees; use them to explore further the service and sacrifice of the alumni in Memorial Hall.
Retrieved from "http://usnamemorialhall.org/index.php?title=SCOTT_D._KETCHIE,_CAPT,_USMC&oldid=132927"
Categories: