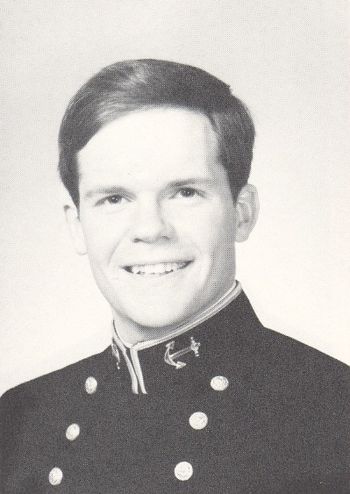 Mark broke the hearts of all the gals in Fraser, Michigan when he left to pursue a career of voice at the Naval Academy. Mark was never nice enough to throw us a few of the scraps after all his girlfriends he went through in his four years here. Between singing, and systems, and singing, and girls, and singing, and his car, and singing, and choir, and singing, Mark did not have much time for Green Alerts. Why waste time watching Monday Night Football and drinking beer when he could be evaluating integrals or programming a computer? One of Mark’s greatest distinctions and biggest disappointments was being number two on the plebes’ biggest flamer list our second class year.

I wish I could have been V.P. of the Glee Club and Pres. of the Public Relations Committee so that I too could be spooned by Admirals and their daughters.

Mark broke the hearts of all the gals in Fraser, Michigan when he left to pursue a career of voice at the Naval Academy. Mark was never nice enough to throw us a few of the scraps after all his girlfriends he went through in his four years here. Between singing, and systems, and singing, and girls, and singing, and his car, and singing, and choir, and singing, Mark did not have much time for Green Alerts. Why waste time watching Monday Night Football and drinking beer when he could be evaluating integrals or programming a computer? One of Mark’s greatest distinctions and biggest disappointments was being number two on the plebes’ biggest flamer list our second class year.

I wish I could have been V.P. of the Glee Club and Pres. of the Public Relations Committee so that I too could be spooned by Admirals and their daughters. 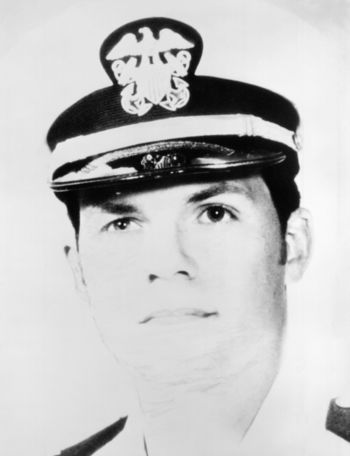 The Intruder from VA-85 was hit by an SA-7 or SA-9 missile into the engine nozzle right after dropping its bomb-load, while still in a dive through 1.800ft. The rear fuselage and one wing were immediately afire, and then the starboard engine exploded. The pilot, Lt. Mark "Doppler" Lange, did his best to keep the aircraft airborne and enable his bombardier/navigator (BN), Lt. Bobby Goodman, to eject safely. After almost colliding with the ground the aircraft was seen to pull up into the sky for the last time - and then it crashed on a 245m high hill, directly above a village surrounded by Syrian AAA-positions. Lt. Lange ejected in the final moment, but his parachute failed to properly deploy by the time he hit the ground: his left leg was so severely injured, Lange died shortly after in the hands of several Syrian troops and Lebanese civilians. Goodman broke three ribs and injured the shoulder and a knee during the landing, but was otherwise OK. He was captured by the Syrians immediately afterwards, and taken to Damascus.

From the March 1984 issue of Shipmate:

Lt. Mark Adam Lange USN was shot down and killed by Syrian anti-aircraft fire in Lebanon on 4 December 1983. His body was returned to American authorities on 7 December and brought to the United States on 10 December for memorial services held on 12 December at the St. John Lutheran Church in Fraser, Michigan.

After having made a six-month deployment in FORRESTAL, he was flying off KENNEDY at the time that he was shot down. He was a life member of the Naval Academy Alumni Association. He is survived by his widow Cheryle; a daughter, Jamie Christina; his parents, Mr. and Mrs. Walter H. Lange, 16356 Orchard Lane, Eraser MI 48026; three brothers and a sister; his maternal grandparents and his paternal grandmother.

The family has indicated that, if desired, memorials be made to the Lt. Mark A. Lange Memorial Fund, Naval Academy Alumni Association, Alumni House, Annapolis, MD 21402.

"Ever lost a kid?" Walter Lange asked yesterday afternoon, shortly after the television set in his home in the Detroit suburb of Fraser told him his son, U.S. Navy Lt. Mark A. Lange, 26, was dead.

Lange, a pilot, and his fellow crew member, bombadier Lt. Robert O. Goodman Jr., 27, of Portsmouth, N.H., were flying their A6E light fighter bomber on a retaliatory bombing raid over Syrian targets in the central Lebanese mountains yesterday when a surface-to-air missile crippled their plane, according to reports from the Pentagon.

At 5 p.m. yesterday, Walter Lange had no official confirmation of the message delivered with spare electronic grimness by a local Detroit television station. Four hours earlier, a military messenger had told him "only that Mark was shot down and his status was unknown," Lange said in a telephone interview.

There were pictures, still photos an Associated Press photographer had taken of two downed American fliers. But Lange had seen no picture of his son when he spoke on the phone. He had heard about the attacks on U.S. reconnaissance planes that had prompted the retaliatory strike, about 28 planes going out on the bombing mission, about the downing of two of the planes and the rescue of one pilot. But nothing more about his son.

Lange's father also was in the military, as an enlisted man in the Navy at the end of World War II.

Asked about his son, Walter Lange said simply, "He was doing what he was trained to do." Mark, one of five Lange children, is divorced and the father of a one-year-old son.

Both Marilyn Goodman and Walter Lange had been under the impression that their sons' ship, the USS Kennedy, had left the danger zone of the eastern Mediterranean.

"As I understand it, he wasn't supposed to be there very long," said Mrs. Goodman. "I thought he would be gone by the end of the month.

In a taped message that Lange sent to his parents a few days ago, "he said he thought he was headed for the Indian Ocean," the elder Lange said.

Then he said calmly, "I do need to keep this [telephone] line clear."

Alumni Hall - Basketball, Volleyball & Wrestling at the U.S. Naval Academy has a music room that was named for Lt. Mark Lange, Class of 1979, because he had been in Academy Glee Club and, whose plane was shot down over Lebanon in Dec. 1983. Residents from Lange's hometown of Detroit and the surrounding areas funded the room.

From Heroes of the US Naval Academy:

On September 11, 1981, LTJG Lange married Cheryle K. Lockwood in Bee, Texas. Together they had one daughter, Jamie Christina Lange. The Lange’s separated and divorced. Jamie Lange was raised by Lieutenant Lange’s parents.

In 1982, LTJG Lange was assigned to Attack Squadron Eight Five (VA-85) “The Black Falcons.” The squadron and LTJG Lange made a six month deployment on aircraft carrier USS Forrestal (CVA-59).

In October 1983, John F. Kennedy was diverted to Beirut, Lebanon from her planned Indian Ocean deployment, after the Beirut International airport barracks bombing killing 241 United States Marines taking part in the Multinational Force in Lebanon, and spent the rest of that year and early 1984 patrolling the region.

Eventually the United States did retaliate. Retaliation was sparked by the firing of surface-to-air missiles at the two United States F-14 reconnaissance aircraft flying over Syrian positions in Lebanon. None of the planes were hit, but President Reagan decided to respond with an air strike. The provocation was small but everyone knew this was to be a vengeance mission for the killing of Marines.

Plans called for launching aircraft at 1100 the next day, December 4, 1983. Time over the target was set for 1130. Early that morning, however, the task force commander received orders through the military chain of command to mount the attack at 0630 on in about an hour. He was not ready and sought permission to strike as planned. The best he could get was a one-hour delay.

“There followed a mad flail,” John Lehman, the Secretary of the Navy, would later write, “Normally the strike crews must begin briefing at least two hours before launch time in order to be prepared properly. Now, neither air wing had sufficient numbers of aircraft loaded nor crews assigned, let alone briefed. Aircrews scrambled to take whichever aircraft were available, and without any time to brief, launched on schedule.”

On December 4, 1983, ten A-6 aircraft from John F. Kennedy, along with A-6 and A-7 aircraft from USS Independence, took part in a bombing raid over Beirut.

Some planes took off with only two bombs, said Lehman. Others carried payloads more appropriate to hitting targets in Baalbek, for which the crews had been preparing themselves. Because of the haste and confusion, radio silence proved impossible to maintain, alerting the Syrians. The targets selected were small and, with perhaps on exception, inconsequential. Worst of all, because of the change in launch time, the attacking aircraft found themselves flying into the fiery glare of the early-morning sun while the Syrian gunners they were searching for awaited them in the shadows.

The only plane carrying a full load of bombs was Lieutenant Lange’s. The Navy lost two aircraft during the raid: an A-7E from Independence and an A-6E from VA-85 launched from John F. Kennedy were shot down by SAMs. The A-7E pilot was picked up by a fishing boat. While on a bombing mission, the two man crew from VA-85 was hit by an infrared-homing missile SA-7 or SA-9 into the engine nozzle upon dropping its bomb-load, while still in a dive through 1,800 feet (554 m). The fuselage and a wing were immediately engulfed in flames, and then the right side engine erupted.

The pilot, Lieutenant Mark Lange, tried to control the aircraft in order to safely eject his Bombardier-Navigator Lieutenant Bobby Goodman. After a rapid, low-level descent, the Intruder was seen to pull up and likely stalled, resulting in a crash on a 1,000 foot hill, above a village surrounded by Syrian AAA-positions. Lange ejected both himself and Goodman in the final moment, but his parachute failed to properly deploy by the time he hit the ground. Lange's left leg was severely injured and he died shortly after capture by Syrian troops and Lebanese civilians. Lieutenant Goodman, rendered unconscious, broke three ribs, injured a shoulder and a knee during the landing, but was otherwise stable. He was captured and awakened by the Syrians and taken to Damascus. Lieutenant Lange’s captors did not apply a tourniquet that might have saved his life. Doctors who later examined the body said he bled to death.

In return for two planes lost, Lieutenant Lange’s death, and a second captured, the Americans managed to knock out two gun emplacements and damage a radar installation that was back in business a day later.

Mark is listed with five other alumni under the heading "Lebanon 1983" on the killed in action panel in the center of Memorial Hall.

Mark is one of 15 members of the Class of 1979 on Virtual Memorial Hall.

The "category" links below lead to lists of related Honorees; use them to explore further the service and sacrifice of the alumni in Memorial Hall.
Retrieved from "http://usnamemorialhall.org/index.php?title=MARK_A._LANGE,_LT,_USN&oldid=132534"
Categories: