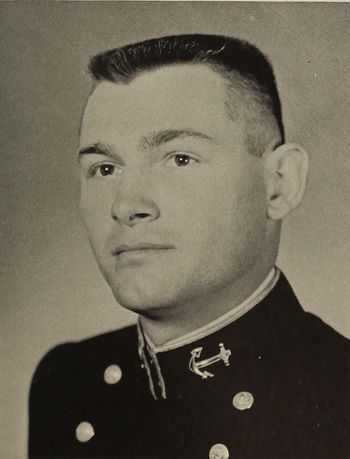 Arriving at Navy with two years at Villanova and a Youngster cruise already behind him, Willie proved himself a survivor of the days of wooden ships and iron men, making known his first love, sailing. Spark plug of the company cross country and steeplechase teams in the fall and winter, he made full use of the spring sailing season to get in shape for a lively summer leave aboard the "Bagheera" in Lake Michigan. Although he often proposed, "If at first you don't succeed, give up," Willie's determination successfully carried him through four years and makes him a sure bet for a great career on those destroyers.

Arriving at Navy with two years at Villanova and a Youngster cruise already behind him, Willie proved himself a survivor of the days of wooden ships and iron men, making known his first love, sailing. Spark plug of the company cross country and steeplechase teams in the fall and winter, he made full use of the spring sailing season to get in shape for a lively summer leave aboard the "Bagheera" in Lake Michigan. Although he often proposed, "If at first you don't succeed, give up," Willie's determination successfully carried him through four years and makes him a sure bet for a great career on those destroyers. 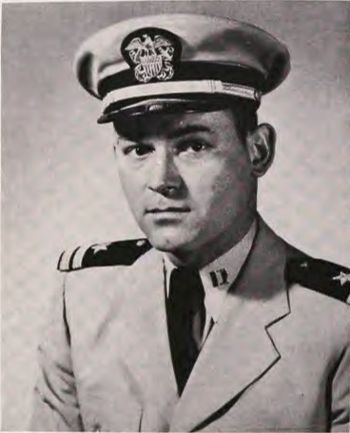 From the August-September 1965 issue of Shipmate.

Bill was killed on July 9, 1965 while a member of the 15th RVN River Assault Group, Naval Advisory Group. His unit was overrun.

From the August-September 1965 issue of Shipmate:

Lt. Brown was a native of Tecumseh, Mich. He graduated from the Naval Academy with the class of 1959 and entered the surface Navy where he spent most of his commissioned service aboard destroyers before being ordered to Viet Nam.

He is survived by his parents, Mr. and Mrs. Robert S. Brown, Sr., of 706 W. Chicago Blvd., Tecumseh, Mich., and one brother, Robert, also of Tecumseh.

Thank you for your sacrifice. You were a friend of my father. He named me after you. I think about you often. My son is also named after you, not me. WILLIAM PHILIP TAMONY, BILLTAMONY@GMAIL.COM, 12/4/16

I first met Bill Brown when I reported aboard my first ship, the Destroyer, USS Braine (DD-630), homeported in San Diego. I was assigned as Gunnery Officer, Bill was the Weapons Department Head. The following are just a few snippets of remembrance of my too short time with my friend. Bill was a very conscientious, but fun loving young officer, and quickly pulled me under his wing. He was a great mentor and coach, and much of my love for the Navy and its traditions were as a result of Bill's attitude and instruction. In addition to being my boss, Bill also soon became a good friend. We spent much of our free time at the beach or at the Snake Ranch that a bunch of us rented in Mission Beach. Bill was very religious and tempted me with pizza if I would go to evening services with him, which I did on occasion. At some point Bill picked up the nickname "Squirrels"; where this came from, I have no idea.

I visit the Wall often, even though I am now retired and living in Pennsylvania. And I always shed a tear for Bill and all those other wonderful warriors who are memorialized there. On this Memorial Day 2002, I say a prayer for you, my friend and shipmate. May you and all the others rest peacefully in God's good grace: your friend, Jack. CAPTAIN JOHN A. STANDISH, USN (RET), 11/26/02

From the August-September 1965 issue of Shipmate:

Before closing let me call your attention to "Last Call" on William L. Brown in the "All Hands" section. Bill is the first and, God willing, we pray the last, of our classmates to be killed in action at the hands of an aggressive, subversive group threatening the peace and security of the democratic, freedom-loving countries throughout the world. Bill was an advisor to a Junk division of the South Vietnamese Navy. His job was to train and advise these South Vietnamese sailors while on patrol assignments to intercept arms smugglers and coastal infiltrators. It is one of the toughest assignments in Viet Nam. His duties required that he live with these men, at their standards, and try, by precept and example, to indoctrinate, train, and instill within them devotion to duty, purpose, and teamwork.

To Brownie, the war in Viet Nam was very real. When he arrived in Saigon he asked for assignment to the Junk Force because he felt there was a challenge in that force that could not be found elsewhere in the U. S. Navy. The war in Viet Nam, to Brownie, was not only a battle against the Viet Cong, but also against stagnant thinking, monotony, Asian and American indifference, and, probably most important, the lack of national interest and purpose by the Vietnamese. While attempting to do his part in fighting this battle. Brownie's division was overrun by the Viet Cong.

The Space-Age Navy that most of us serve and know had little meaning to Brownie in Viet Nam. He worked, lived, and fought in a primitive environment that defies description. He did his job to the best of his ability and received much praise for his accomplishments, which might seem unimportant to the modern society from which he came, but were milestones in the struggle for freedom and independence the Vietnamese want. He believed that the Vietnamese wanted and needed our help in obtaining this freedom and independence and that the sacrifices would be worthwhile to the free world. In that Brownie has now given his last full measure of duty and devotion to the freedom of a foreign country, let us all be reminded and rededicated to the cause of freedom for all mankind.

We, the class of 1959, have truly lost a friend and a dedicated American naval officer. A card has been sent to his parents expressing the sympathy of his classmates and sharing the loss with his loved ones.

The following letter was received from a friend of the class and former company officer of Bill Brown, Lt. Col. Robert (Bonzo) Perrich, USMC: "To the Class of 1959: It is with heavy heart that I undertake the task of reporting the details, as are known, of the death of your friend and classmate—and my friend and company-mate—Lt. W. L. Brown on 9 July in the Village of Ky Hoa, near Chu Lai, RVN.

"Bill was the U. S. Navy Advisor to Junk Division 15 of the Vietnamese Navy, whose base was located on the island of Ky Hoa. When we Marines landed at Chu Lai our operating area was not more than 4 air-miles away from that base, and Bill made contact with the 4th Marines Headquarters. He, through his tact and abilities, quickly established himself and his VN counterpart as good friends of all officers in the Regiment and undertook to coordinate the operations of the Junk Division afloat with those we are conducting ashore. As an indication of the esteem in which we held Bill, I mention that he is the only non-Marine who became a full member of the 4th Marines Officers' Club.

"My battalion—1st Bn., 4th Mar.—is the closest unit to the Junk Base, and we operated frequently with the Junk Division. The island Ky Hoa had been free of any Viet Cong activity for over a year, and the government considered it to be a cleared area.

"But at 0530 on 9 July, with the Junks at sea, the VC struck in a surprise raid on the base, in force of an estimated 200-300 men, supported by mortars. It appears that Bill was in his quarters when the raid began with a heavy mortar barrage. The infantry attack followed immediately, focused on the rear (land) side of the defenses, and quickly over-ran the 25-man defensive force. Bill and his Chief appear to have been moving from their quarters toward the point of attack when they were hit by either a near-miss mortar shell or an automatic weapon. Death came instantaneously to both and nearly simultaneously.

"My men recovered the bodies and returned them to our medical facility following the tactical riposte to the raid. There is little to add except that Bill was dedicated to his work, strove mightily through a thicket of frustrations to increase the effectiveness of the force to which he was assigned, and died as he lived—doing his duty. We Marines here at Chu Lai mourn our comrade and friend, and send our deepest sympathy to his family and his classmates."

And from Paul E. Guay:
"Dear Classmates: I'm sure you know by now of the loss of one of our number here in Viet Nam, Lt. William L. Brown, USN. Brownie was a Junk Tour advisor in the same area as I have been working. He had been here for 2 1/2 months and we were close friends during that time.

"In his time here he had carried out his job in an outstanding manner and his loss is a dear one to the Navy.

"I realize in our last class letter it was pointed that the practice of buying memorial chairs was going to cease. I hope we will see our way clear to doing something for Brownie.""

William is one of 32 members of the Class of 1959 on Virtual Memorial Hall.

The "category" links below lead to lists of related Honorees; use them to explore further the service and sacrifice of the alumni in Memorial Hall.
Retrieved from "http://usnamemorialhall.org/index.php?title=WILLIAM_L._BROWN,_LT,_USN&oldid=132473"
Categories: