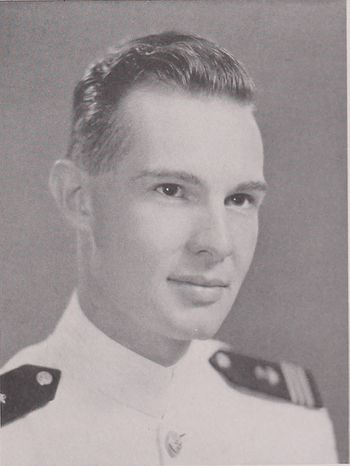 Bob, the tall fellow from Colorado, was one of those individuals who seemed to get good grades without having to overwork, or to worry about the next day's assignments. He was always ready for a sail, swim, or a liberty. Bob did his share of dragging and every one was above 3.5, too. His spare energy was spent, during the last three years, in putting out the Reef Points for the edification of the plebes, as an active Boat Club sailor, and as a member of the Spanish Club and the Reception Committee. Bob's cheerful laugh and bright remarks were always there when you seemed to need them most.

Bob, the tall fellow from Colorado, was one of those individuals who seemed to get good grades without having to overwork, or to worry about the next day's assignments. He was always ready for a sail, swim, or a liberty. Bob did his share of dragging and every one was above 3.5, too. His spare energy was spent, during the last three years, in putting out the Reef Points for the edification of the plebes, as an active Boat Club sailor, and as a member of the Spanish Club and the Reception Committee. Bob's cheerful laugh and bright remarks were always there when you seemed to need them most.

Lt. Robert T. Ruble was almost gone by the time divers found his World War II submarine at the bottom of the Gulf of Thailand a year ago.

Nobody left remembers the sound of his voice or the color of his eyes. No one knows the last name of Elly, the pretty blonde standing at his side in a 1943 snapshot, probably taken in Denver the year he graduated from the U.S. Naval Academy in Annapolis, Md.

And no one living now has ever heard whether he played baseball or liked to dance, whether he was funny or serious, or what plans he had made for the rest of his life. If he wrote letters home from the war, his correspondence has long since vanished.

All that remains are a handful of black-and-white photographs, new Ruble kin too young to remember him, and his namesake and nephew, Billings anesthesiologist Dr. Robert Ruble.

Lt. Ruble's submarine, the USS Lagarto, was sunk by a Japanese depth charge 26 days before Dr. Ruble was born on May 29, 1945. The Navy had not yet notified his family that the submarine had vanished with all 86 aboard presumed lost.

With no inkling of the tragedy that would soon overwhelm them, Elizabeth and Frank Ruble decided to call their new son Peter. News that that Frank's 24-year-old brother was missing in action and presumed dead arrived in June. Immediately, Frank legally changed his infant son's name to Robert and had a new birth certificate issued.

"But they still called me Peter," Dr. Ruble said last week. "They couldn't bear to say his name.

"One of my earliest childhood memories was a discussion with my mother about my real name. When I asked, I could see tears starting in her eyes. That's probably why I remember it - my mother didn't cry very often. But after that conversation they stopped calling me Peter."

He grew up knowing little of his uncle.

"My family was not one to talk about painful things," he said. "They choked up and got quiet whenever it came up."

There are a few hints of how Lt. Ruble came to play his part in history. His eldest brother, Richard, had gone through the Naval Academy years before, and eventually commanded ships in World War II and the Korean War, retiring as a vice admiral. Richard may have supplied the sailor suit that Lt. Ruble was wearing in a family photograph when he was 7 or 8 years old.

Earlier this month, U.S. Navy experts at the Naval Historical Center in Washington, D.C., confirmed that the submarine found by wreck divers in April 2005 was the Lagarto.

It wasn't exactly news to Dr. Ruble. The diver who found the submarine had published an article in a wreck diver magazine. By chance, the grandson of another Lagarto sailor saw the story. He and his mother, who live in Wisconsin, where the submarine was built, began trying to contact other relatives of the lost crew with the help of the Wisconsin Maritime Museum in Manitowoc.

CNN picked up the story, and Dr. Ruble's brother happened to catch the piece. He e-mailed Dr. Ruble, who contacted the Wisconsin group.

When he learned that his uncle's boat had been found, Dr. Ruble understood a little of what his parents felt that day in 1945 when they were told Lt. Ruble wasn't coming home.

"It was a funny feeling," he said. "It's not a region of the world I would like to visit otherwise. But I would very much like to visit that spot and close that connection."

His wife, Sheila Ruble, felt the tug of Lt. Ruble in another way. When the Rubles learned the Lagarto had been located, she happened to be reading "Those Terrible Hours," a book about submarine rescues.

"It was a very odd feeling to read what it was like for those men," she said. "I feel I know a little of what they went through when they went down."

World War II seemed like ancient history when he was a child growing up, Ruble said. He remembers his father watching the classic war documentary "Victory At Sea" every chance he got, but it meant little to a boy growing up in postwar America.

Now he understands how close the war really was and its cost to an earlier generation.

"We've visited Normandy and looked at all those crosses and all those names," he said.

"Look at this guy," he said pointing to the formal portrait of Lt. Ruble in his dress uniform, "how handsome he was, how nice he was, and all that's left is these medals. It's an incredible loss to his family and to the country. How many millions of times has this happened through the years?"

No one will be allowed to enter the wreck of the USS Lagarto, the U.S. Navy said earlier this month when it confirmed the identity of the World War II submarine at the bottom in the Gulf of Thailand.

It's considered a grave site, and no intruders can be permitted to disturb the tomb of her 86 crew members.

The Lagarto, on its second patrol, was last heard from May 3, 1945, while coordinating an attack on a Japanese convoy with another American sub, the Baya. Nobody saw her again until late April 2005, when British wreck diver Jamie Macleod submerged 230 feet into the waters off the coast of Thailand to find her sitting upright with a huge hole in her port bow from a Japanese depth charge.

News spread round the diving world and then to the families of the Lagarto's officers and crew. In a matter of months, word had reached Billings and Dr. Robert Ruble, whose uncle, Lt. Robert Ruble, had gone to the bottom with the Lagarto.

Lt. Ruble, 24 and unmarried, left few traces that can be followed after 60 years, but the Lagarto was well documented from the day she was laid down in Manitowoc, Wis., on Jan. 12, 1944, until the morning of her disappearance just months before the Japanese surrender.

Named for a lizard fish, the Lagarto saw a lot of the world in her brief life. After trials in Lake Michigan, she was floated to Chicago and down the Illinois River to the Mississippi. For her trip down the Mississippi, she was cradled in a floating dry dock to New Orleans. On Nov. 12, 1944, she left New Orleans and headed for the Panama Canal. She arrived at Pearl Harbor on Christmas Day.

By Feb. 7, 1945, she was on her way to her maiden patrol in the Ryukyu Islands in the Pacific Ocean northeast of Taiwan. The Allies were preparing for an invasion of Japan, and Lagarto was helping clear the way.

On Feb. 27, the Lagarto engaged in her first major action and earned her battle star by sinking an enemy submarine and possibly a Japanese merchant cargo ship. By March 20, she was at Subic Bay in the Philippines, awaiting orders.

After two of her officers were involved in a car accident and new ones were flown in, Lagarto departed for her final mission on April 12.

Seasoned by battle, the crew was probably feeling confident and anxious to get back into the fray. Lagarto was ordered to patrol the South China Sea and a couple of weeks later was directed to the outer edges of the Gulf of Thailand.

On May 2, she was contacted by another American sub, the Baya, which was already patrolling the gulf. Baya had found an enemy convoy consisting of a tanker, one medium-sized ship and two escorts, including the Japanese minelayer Hatsutaka. The Lagarto found the convoy, too, and the American subs moved in for a joint attack.

The two escort ships were equipped with radar and detected the Baya. They drove her away, forcing the American captains to wait for another chance.

Early on the morning of May 3, the two submarines had a rendezvous to form a new plan. It was decided that Lagarto would dive and follow the convoy's track. She was to contact the Baya at 2 p.m. Baya was to be 10 to 15 miles ahead.

During what must have been a long, tense day, the submarines contacted each other several times. It's not clear when the Lagarto last reported, but Baya suspended its attack about 10 minutes after midnight on May 4 after a long and unproductive pursuit.

The Baya continued to send signals to the Lagarto every half-hour, getting no response. When Lagarto didn't return to Subic as scheduled, the Navy announced that she was overdue from patrol and presumed lost. The Lagarto was stricken from the Naval Vessel Register on Sept. 1, 1945.

Although it was clear she had been sunk, her location was unknown.

Macleod searched for her by comparing fishermen's reports of net snags in the area where Japanese records released after the war indicated the minelayer Hatsutaka attacked a submarine in the Gulf of Thailand. (The Hatsutaka herself was sunk 12 days later by another American sub, the USS Hawksbill.)

The wreck diver found the Lagarto near her last reported sighting, her conning tower and guns still intact. One of her torpedo tubes appeared to be open, indicating she may have had a chance to fire a shot.

Since the Lagarto was the only submarine known to have been lost in the gulf, the find was generally agreed to be her. But the Navy did not issue a confirmation until its own divers had a chance to look her over.

Because of the depth, divers could spend only 20 minutes at a time on the wreck. They took about an hour to slowly surface and then had to stay two hours in a decompression chamber.

Lagarto was easily identified by two 5-inch guns on her deck and the fact that her anchor was on the starboard side, as it was with all submarines built at Manitowoc. Divers scraped away marine growth from her propeller, where other submarines had their names engraved. The found the letters L and A.

A plaque honoring the sailors was left on the sub during the last dive.

Robert is one of 83 members of the Class of 1943 on Virtual Memorial Hall.