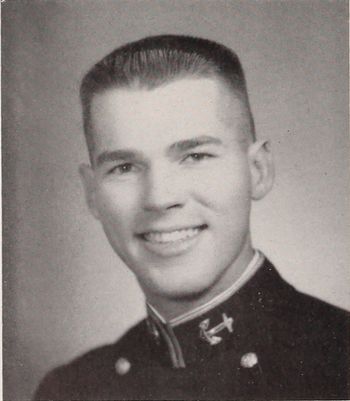 When Dave was through defeating the academics for the afternoon, he could usually be found on his way to the golf course, where he usually defeated par. If love for the game means anything the Naval Academy has produced the successor to Ben Hogan. In addition to his success with the varsity golf team Dave has shown us what conscientious effort can bring in academics and social life. Neither the academic departments, the executive department, nor the "female department" have given him much trouble. Tennis, aviation, and hunting rival golf were his interests. Known on the golf course as "Davy Crockett," Dave will be remembered by everyone for his easy-going manner and personality.

When Dave was through defeating the academics for the afternoon, he could usually be found on his way to the golf course, where he usually defeated par. If love for the game means anything the Naval Academy has produced the successor to Ben Hogan. In addition to his success with the varsity golf team Dave has shown us what conscientious effort can bring in academics and social life. Neither the academic departments, the executive department, nor the "female department" have given him much trouble. Tennis, aviation, and hunting rival golf were his interests. Known on the golf course as "Davy Crockett," Dave will be remembered by everyone for his easy-going manner and personality.

Maj. David Irvin Wright, USAF, was killed on 13 November 1970 when the unarmed reconnaissance plane in which he was the pilot was shot down over North Vietnam. Memorial services were held at the Nellis Air Force Base Chapel. His body was not recovered.

His plane was on a routine picture-taking patrol when it was hit by ground fire about 105 miles north of the demilitarized zone. Pilots of fighter planes which accompanied Maj. Wright's plane said they saw no parachutes as his aircraft plunged to the earth. His plane was the 11th one (fifth recon naissance) shot down over North Vietnam since the bombing halted 1 November 1968.

Born in Logan, W. Va., he was a 1957 graduate of the Naval Academy and obtained a Master's degree in industrial engineering from Georgia Tech. Maj. Wright served tours in Germany and Turkey as well as those assignments in the states. In May 1968 he was ordered to the F-111 program at Nellis Air Force Base, Las Vegas. He was assigned to Udorn Royal Air Force Base, Thailand, in January 1970 and was to have returned to the United States by Christmas.

David has a memory marker in Hawaii. 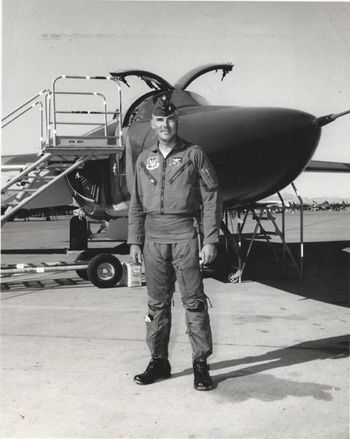 David Wright was my father. His plane was shot down three days before my 10th birthday. He was on a reconnaissance mission, filling in for someone who was sick that day. He was scheduled to return home for Thanksgiving which was only two weeks away.

I miss him every day. He was an exceptional person--smart, fun, a great story-teller, a scratch golfer, an outdoorsman and a great dad. He left behind a wife and three little girls. My memories of my dad are those of a child. I know what he was like from my mother, my grandmother and his friends. If anyone knew my dad, I'd love to hear from you. SHARON WRIGHT MESTER, 11/1/01

As a teenager in Roanoke Va., I was a neighbor of David's. I am grateful to have the opportunity to say, Thank you, David, for your sacrifice and also thank you for the wonderful, smart person that you were. GLORIA GANSKE MCCLANAHAN, GLOGUY@TRIAD.RR.COM, 8/23/04

I was a 19 yr. old Crew Chief when I met Maj. Wright. He flew my plane regularly. He was a great guy and my heart broke when he was shot down. I still think of him and his family often. NORM CARON, NORMCARONJR@GMAIL.COM, 5/27/12

I was flying RF-4Cs at Udorn in early 70s. In addition to being a line pilot, I was also the maintenance officer because the real maintenance officer had to go on emergency leave. On Thursday, November 12, 1970 I was called to the flight line to inspect one of our returning RF-4Cs with major structural damage. The pilot was Rich Siner (USAFA Class of 1965) who had flown a mission over North Vietnam to photograph a SAM site. As he approached the site at low level the gunners opened up, and Rich pulled something like 12 g’s to avoid the AAA. The aluminum skin on the wing was almost pulled off due to the high g forces.

When I returned to the squadron to get my mission for the following day, Friday the 13th, I discovered that I was supposed to return to the same SAM site that fired on Rich. I was supposed to overfly the site at 500 feet for the photo mission. I talked with Rich about the defenses and the best routes in and out of the area. After doing my mission planning I turned the map in to our ops officer who forwarded mine and three other North Vietnam missions for the 13th to 7th AF in Saigon.

Late in the evening I got a call from someone in wing ops who told me that someone had mixed up the routes and names and that I was supposed to fly one of the other missions, and someone else would fly my mission. I replied that I was not going to fly a route that I had not planned and no one should have to fly my route. They said to hang tight and they would get back to me. They called back later and agreed that we would all fly the routes we had planned but that my mission for the 13th had been cancelled.

Since I wasn’t supposed to fly in the morning, I slept a little later than normal and headed to the maintenance section. As I was checking on one of the aircraft for the morning missions someone asked me where I had been. Apparently someone from the squadron had tried to call me at the hooch to tell me that my mission was back on, but the Thai maid didn’t understand what they wanted. My flight commander, Dave Wright, was in the squadron and was able to go to the required briefing, and he took what was my flight.

About an hour and a half later I was in the squadron when the ops officer took a phone call. I don’t know what it was about the call, but I immediately got goose bumps on my arms. I knew something bad had happened. When the ops office hung up the phone he told me that Dave Wright’s plane had been shot down over the SAM site and both Dave and his backseater were killed.

This Memorial Day, as they have for the past fifty years, my thoughts turn to USAF Major David Wright. Dave and I were crewed together for the second half of my tour at Udorn, Thailand in the 14th Tactical Reconnaissance Squadron.

Dave was from Annapolis, Maryland, a true southern gentleman and a great fighter pilot. We flew perhaps forty or so missions together in1970 mostly over Laos and North Vietnam. You form a special bond flying together and that bond is certainly stronger when you're flying in combat and your lives depend on one another. Dave and I were a great team and I was very fortunate to have him as my front seater. When my tour was up Dave had two months left before he'd head home.

Two weeks before the end of his tour Dave flew a mission over North Vietnam that he never returned from. The news was devastating for me as I know it had to be for his family. I felt that I let Dave down and should have been there to protect him. A classic case of survivor guilt.

I tried to write to Dave's wife. I'd never met her, but knew her through my conversations with Dave. I started a letter to her at least three dozen times, but fell apart every time and could never finish what I started. Many years later I found myself at the Vietnam War Memorial and as I touched Dave's name on the wall I felt a very strong sense of relief, perhaps that survivor guilt finally washing away.

After that experience I looked for Dave's widow without success. I wanted to tell her what a wonderful person Dave was, how much I enjoyed flying with him, and how lucky I still feel to have had him in my front seat.

Requiescat in pace, my friend.

The video of the Naval Academy Alumni Association's Honor Our Fallen Heroes weekend for 2016 includes all three of David's daughters.

David is one of 38 members of the Class of 1957 on Virtual Memorial Hall.

Retrieved from "http://usnamemorialhall.org/index.php?title=DAVID_I._WRIGHT,_MAJ,_USAF&oldid=132170"
Categories:
Hidden category:
This page was last modified at 17:09 on 5 October 2020.
About USNA Virtual Memorial Hall