John Van Rensselaer Kluegel was admitted to the Naval Academy from California on July 10, 1923 at age 18 years 0 months. 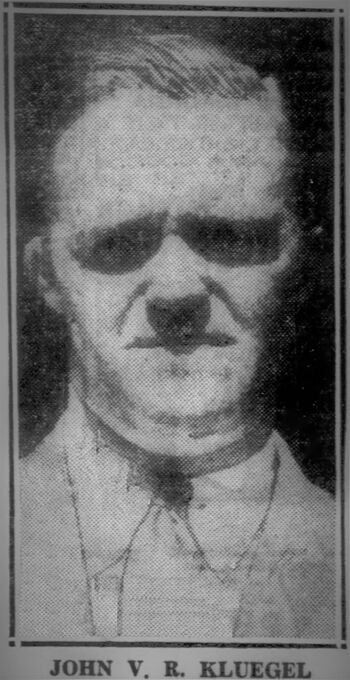 John was lost on December 10, 1941 when he was killed by a Japanese infantryman during the invasion Guam.

In a letter written by the U.S. Employees' Compensation Commission:

Dear Sir: This will acknowledge the receipt of your letter of 22 July 1942, requesting information as to the manner in which John R. Kluegel, deceased employee of the Contractors, Pacific Naval Air Base, at Guam, met his death.

The Navy nurses, formerly at Guam, who were repatriated from the Far East and who just arrived on the S.S. Gripsholm, report that Mr. Kluegel's death occurred in Guam as a result of enemy action.

Mr. Kluegel and another employee were in hiding at the time of the attack. When the firing stopped, Mr. Kluegel came out with the intention of surrendering, but was bayoneted nevertheless.

From "Can Do!: The Story of the Seabees" by William Huie:

The seventy-one construction men at Guam, which was not fortified, were taken into Jap custody with only one tragic incident. One man, John Kluegel, of Honolulu, apparently figuring the forces had given up, rushed nervously out to surrender. A Jap soldier, also nervous, promptly bayoneted Kluegel to death.

From the National Park Service:

Among the men whose blood was spilt at the Plaza and its periphery was … J. Kluegel, an American civilian.

News of the death of John V. R. Kluegel of Honolulu has been received by his wife in an official communication from the navy department in Washington.

Mr. Kluegel, an Island man and former member of The Advertiser editorial and business departments, was in Guam at the time of the outbreak of the war with Japan as office manager for the Pacific naval air base contractors. He was reported as one of the Americans taken prisoner on Guam by the Japanese.

Notified by Red Cross
Details of Mr. Kluegel's death are not available. The information was received by the American Red Cross authorities in Geneva Switzerland, which in turn notified the Washington navy department.

Born in Oakland, Calif., and 37 years old, Mr. Kluegel was educated partly in Honolulu, the home of his family for many decades. After severing his connection with The Advertiser Mr. Kluegel became senior interviewer with the territorial employment service and was director of the Molokai community center. He left in April, 1941, for Guam.

First Prisoner to Die
Mr. Kluegel is believed to have been the first American war prisoner of Japan to die. He married Jean Elizabeth Sisson In August, 1935. and is survived by his wife, 2125 Atherton Road, a local schoolteacher; their daughter, Anne, 3, and his father, Harry A Kluegel, general superintendent of the territorial board of hospitals and settlement.

The late Mr. Kluegel was member of the sixth generation of his family in Hawaii. His great, great grandfather, the Rev. Asa Thurston and the latter's wife, Mrs. Lucy Goodale Thurston, were members of the first company of missionaries to come to Hawaii from Boston and arrived here on the brig Thaddeus in 1820. Mr. Kluegel received his education at the Hitchcock Military Academy, California; the U. S. Naval Academy, Annapolis, Md., the University of California, and the law school of Stanford University.

The "reports" of him as a prisoner were in fact "presumptions;" there is no other evidence to suggest he survived was ever taken prisoner, and given that he is buried in Guam it is unlikely he was taken to Japan.

He is identified as "CPNAB, Public Works employee" here, under the title "American Civilian". CPNAB = Contractors, Pacific Naval Air Base. Much more on the history of the contractors is here.

He is buried in Guam. As mentioned above, he married Jean Elizabeth Sisson in 1936 in Honolulu, Hawaii; they had a daughter together.

John is listed with his classmates and on the killed in action school in the front of Memorial Hall.

From the February 1942 issue of Shipmate (after his death):

"While about sixteen years have passed since I left the Academy you may remember me as "Barney" Kluegel in the second batt. After leaving Crabtown I finished up at the University of California and Stanford Law School. Then went to Hawaii where I lived until coming to Guam this spring. It is good to be back with the Navy, even though temporarily, and I have had a swell time renewing former friendships with classmates and others who were at the Academy when I was there.

"With all good personal wishes."

Death of Lieut. John Kluegel, U.S.N., University of California graduate, while a prisoner of war in Japan, was reported today by his aunt, Miss Lorena Jennings, superintendent of nurses at Mt. Zion Hospital, San Francisco. Lieut. Kluegel was captured on Wake Island. Word of his death has been sent to his widow, the former Jean Sisson, Oakland, now living in Honolulu with their son.

Lieut. Kluegel received his A.B. degree in history at the University in 1929. He was prominent in student activities while on the campus. He was on the staff of the Daily Californian and was editor of “Pelican,” humor magazine during his senior year. He was a member of Alpha Delta Phi fraternity and of Skull and Keys, Golden Bear, Pi Delta Epsilon, Iota Sigma and Hammer and Coffin honor societies.

He transferred to the University from Annapolis.

Note: The report of Wake Island, which occurs elsewhere, is a mistake. In addition to the reports and his letter of him being in Guam — plus his burial there — Wake was not invaded until after John was killed.

There is also no evidence that he was ever on active duty after his resignation; the last Register of Naval Officers he appears in is the 1925 edition, which reports his resignation. He does not appear in any Navy Directory from the period, and his letter says he is only with the Navy "temporarily." Each burial site lists his occupation as "civilian."

John is one of 17 members of the Class of 1928 on Virtual Memorial Hall.