James Council Wooten, Jr. was admitted to the Naval Academy from Columbia, Tennessee on May 19, 1913 at age 19 years 4 months.

James is listed in the 1917 Lucky Bag under the heading "Lost at Sea." 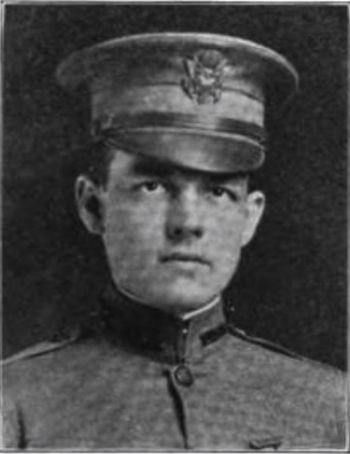 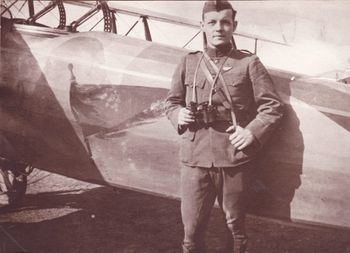 "Lt. James C. Wooten in France by his biplane. Photo courtesy of the Maury County Public Library, Columbia, Tennessee. The Children's Department was named in Lt. Wooten's Memory by his mother, Emma Wooten."

Prepared at the Columbia Military Academy and studied at the United States Naval Academy at Annapolis, from which he resigned in 1914.

Entered the Institute in 1914 and attended until 1917. Studied in the Course in Mining Engineering.

Member of the Beta Theta Pi fraternity, treasurer of The Tech. Member of Technique Electoral Committee, ballet of the Tech Show, Freshman and Sophomore Tug-of-War Teams and Wrestling Team.

He was graduated from the first officers' training camp at Fortress Monroe in August, 1917, and sailed for France September 6. He volunteered as an Aerial Observer. He became a member of the first All-American Squadron and performed many photographic missions, winning the Croix de Guerre and Distinguished Service Cross and being recommended for the Legion of Honor. He shot down one enemy machine and was himself twice shot down. On August 1, 1918, near Château-Thierry he encountered a formation of six German planes and together with his pilot, Lieutenant Wold, was brought down after a hard-fought battle.

(Note: there is no other evidence that he was awarded the Distinguished Service Cross.)

The Register of Alumni lists him only as a non-graduate with no other information.

James is buried in Tennessee; he was survived by his parents.

With the American Army at the Marne. July 7, (4 p. m.). There has been another great burst of air activity on the American sector of the Marne front during which one German machine was shot down In flames, another was compelled to land out of control while two other boche machines were forced down by American airmen attached to an observation division.

One of the enemy machines was sent down in flames, thanks to the teamwork of Lieut. James A. Meisner, of Brooklyn, and Lieut. Hamilton Coolidge, of Boston.

Five German monoplanes joined the fight, but were driven off after a series of thrilling air duels at an altitude of 5,000 feet.

Lieut. Sumner Sewall, of Bath, Maine, "got" his second opponent in a flight over Mouthiers, within the German lines. Nine American planes engaged six Germnns. Lieut. Sewall, after a dramatic fight, pursued a German airman within a hundred feet of the ground. The last seen of the German machine It crashed to earth out of control.

This was Sewall's ninety-fifth flight.

Lieut. James Wooten, of Columbia, Tenn., and Lieut. Cowart, Pilot, in a biplane attached to the observation division, downed a boche.

Lieut. Stephen Noyes, an old Harvard quarterback, and Lieut. Doodals, Hying In a tandem, also connected with the observation outfit, forced down another German plane.

American airmen had numerous thrilling escapes in spectacular fights high in the clouds. Among these Yankee flyers was Lieut. Waldo Heinrichs, of Granville, Ohio, (who had downed an enemy plane two days ago). Heinrichs pursued three enemy machines, exhausting nil his ammunition. Then he dodged behind a cloud bank and escaped unhurt.

LIEUT. WOOTEN, JR., GETS HUN IN FIGHT
John T. Wooten of Columbia has received a message from J. W. Shelton, manager of the Albany (Ala.) Daily, congratulating him upon the fact that his son, Lieut. James Wooten, Jr., had been successful in bringing down a boche air machine. .Mr. Shelton stated that his paper had received telegraphic message from the International News Service to this effect.

The United Press Service, the news service carried by the Dally Herald, had nothing of the occurrence as far as this paper could ascertain. However, the many friends of Lieutenant Wooten hope that it is true, and that he will get many more and be returned safely to his people here at home.

Lieutenant Wooten has been under fire a number of times, having the tail of his machine shot off once and another time his wireless apparatus was rendered useless by a Boche bullet, forcing him to have to return to his lines for another apparatus.

From the Knoxville Sentinel on September 16, 1918:

FRENCH CROSS GIVEN TO DYING COLUMBIAN

COLUMBIA, Sept. 16 — Lieut, James C. Wooten, II, C. A. R. C., died with the cross of the legion of honor upon his breast. This information was brought to Columbia in a letter from Richard Smith, who recently visited the first American aero squadron of which Lieut. Wooten was a member and heard the facts related by his comrades.

Other letters from a companion and the director of the Tech bureau in Paris to Mrs. Wooten told about this battle in which Lieut. Wooten was killed and spoke in the highest praise and admiration of the young hero.

The following extract from Lieut. Smith's letter tells about the bestoyal the cross of the legion of honor upon the late Lieut. Wooten:

"Yesterday was the first I had heard Jim Wooten's death. As I returned from my long trip I ran into his old outfit and asked for him. They then told me how he met his death. He had gone over the lines when a swarm of Boches attacked him and his plane was shot up, but his pilot was able to make it back. Jim was taken at once to the hospital and the French officer rushed around to get the French general to confer the legion of honor. Woolen was unconscious by the time the general reached him, but he died with the cross of the legion of honor on his breast. He certainly died gloriously and every member of his old squadron spoke most highly of him.

By direction of the President, under the provisions of the act of Congress approved July 9, 1918 (Bul. No. 43, W.D., 1918), Second Lieutenant (Air Service) James C. Wooten, United States Army Air Service, is cited (Posthumously) by the Commanding General, American Expeditionary Forces, for gallantry in action and a silver star may be placed upon the ribbon of the Victory Medals awarded him. Second Lieutenant Wooten distinguished himself by gallantry in action while serving as an Observer with the 1st Aero Squadron, American Expeditionary Forces, in action near Chateau-Thierry, France, 15 July 1918, while on a photographic mission.

"As an expression of appreciation of his valor, I award him this citation in the Order of the Army, July 5, 1918. While accomplishing his mission without protection, he negaged in combat three enemy planes which he caused to draw away, then in a second combat against seven planes, during which one had to descend disabled, he himself had to descend inside our lines, wounded in the head." -Marchal Petain, Com in Chief, French Armies of the East

James is not listed with his classmates or on the killed in action panel in Memorial Hall. This omission was discovered while searching for additional information regarding another alumni.

James is one of 9 members of the Class of 1917 on Virtual Memorial Hall.

The "category" links below lead to lists of related Honorees; use them to explore further the service and sacrifice of the alumni in Memorial Hall.
Retrieved from "http://usnamemorialhall.org/index.php?title=JAMES_C._WOOTEN,_JR.,_1LT,_USA&oldid=109593"
Categories:
Hidden categories: