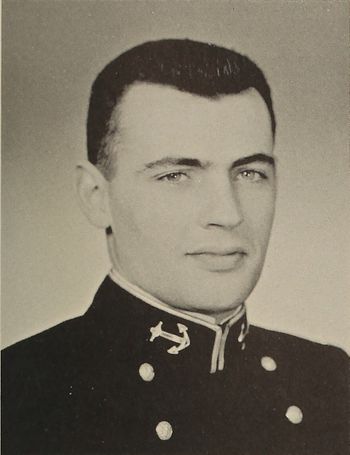 Hailing from the tiny village of Mission, Jack came to the Naval Academy after a tour with the Marine Corps, firmly and rightly convinced that he had left the best branch of the service. Having established a new record for rack time early in Youngster year, he proceeded to rouse himself long enough to earn a set of stars. His winning manner with the Fourth Class was surpassed only by his influence with the weaker sex. In spite of Jack's affinity for the pad, it seems inevitable that he will find enough time to become a first rate officer in the Marine Corps.

Hailing from the tiny village of Mission, Jack came to the Naval Academy after a tour with the Marine Corps, firmly and rightly convinced that he had left the best branch of the service. Having established a new record for rack time early in Youngster year, he proceeded to rouse himself long enough to earn a set of stars. His winning manner with the Fourth Class was surpassed only by his influence with the weaker sex. In spite of Jack's affinity for the pad, it seems inevitable that he will find enough time to become a first rate officer in the Marine Corps. 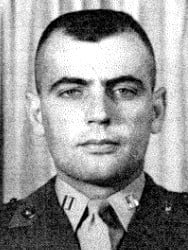 via Heroes of the United States Naval Academy.

14 October: At 02:30 the NVA attacked Golf Company, by destroying 2 machine gun position with RPG's. The NVA penetrated the wire and overran the Company command post (CP) killing the Company commander Capt. Jack W. Phillips, his forward observer (FO) and 3 Platoon leaders; these young 2nd lieutenants just arrived in country. Capt. James W McCarter was ordered to take over command of Company, but he was killed by NVA fire before he could reach the Command Post. Fox Company was ordered to support Golf Company and sweep through the area and drive the NVA out. The Marines were also supported by AC-47; the Marines called them "Puffs". Finally the NVA was forced to withdraw by 04:30. The Marines had lost 21 dead and 23 wounded. SGT Paul H. Foster was posthumously awarded the Medal of Honor for his actions in the battle. The NVA had lost 24 killed.

He was survived by his wife, Georgia, to whom he was married on December 21, 1961, and sons Kevin and Jack W., Jr. (Information from January 1968 issue of Shipmate.)

The President of the United States of America takes pride in presenting the Silver Star (Posthumously) to Captain Jack Warren Phillips (MCSN: 0-77504), United States Marine Corps, for conspicuous gallantry and intrepidity in action while serving as Commanding Officer, Company G, Second Battalion, Fourth Marines, THIRD Marine Division (Rein.), in the Republic of Vietnam on 14 October 1967. During Operation KINGFISHER, the battalion defensive position, of which Captain Phillips' company was a part, was subjected to a devastating enemy rocket barrage. Intermingled with the rocket fire, the enemy unleashed deadly volumes of accurate 60-millimeter and 82-millimeter mortar fire into the company's position. Then with very little pause between the heavy barrages, the company was attacked by a fanatical force of North Vietnamese Army soldiers surging over the defensive wires. Displaying exceptional skill and presence of mind, Captain Phillips directed his men to hold their fire to insure greater accuracy with each shot. He finally signaled his company to open fire, completely raking the enemy force and inflicting a large number of casualties with the initial burst of fire. During the ensuing fire fight, which lasted for more than three hours, the well-trained enemy troops ran rampant within the Marine positions, retaliating with grenades, satchel charges and intense small-arms fire in a frantic attempt to completely overrun the company. Remaining calm, Captain Phillips shouted words of encouragement to his men and repeatedly exposed himself to the hostile fire in order to direct his company's efforts. He continually crossed the hazardous company perimeter to assess the situation and issue necessary orders. Moving from position to position, Captain Phillips inspired his men with his forceful leadership and courageous fighting spirit until he fell, mortally wounded by enemy automatic weapons fire. His daring initiative and resolute determination undoubtedly prevented many of his men from being killed or wounded by the overwhelming enemy force. His exceptional valor and unfaltering dedication to duty were in keeping with the highest traditions of the Marine Corps and of the United States Naval Service. He gallantly gave his life for his country.

Like many, I saw the iron warrior, a man of impeccable character and infinite ability. He will always be my hero, as he is to a grandson who knows him only through the memories of those left behind. But unlike many, I will always be the little boy who saw the gentle heart underneath. From a son who misses his dad. KEVIN PHILLIPS, AIRBORNESIXGUN@HOTMAIL.COM, 5/6/12

I was Maj. Phillips radio operator the night he was killed. He was a great officer and a brave American. I think of his example often and am still inspired by him to this day. He spoke the last words of his life to me that night. CHARLES (CHUCK) ATKINS, CATKINS@HARGRAY.COM, 5/28/12

Most of us from the 13th Company think you would have become the Commandant of the Marine Corps, you were that good. A friend to all, tough, strong, and a leader of men without peer. We miss you dearly. God bless and keep you! DON SMITH, BGDONSMITH4@COMCAST.NET, 5/9/08

Jack Phillips was a Kansas farm boy. He began his walk with us from his home in the small town of Mission, Kansas. Jack was an enlisted Marine who entered the Academy from the Naval Academy Preparatory School, NAPS which at that time was located in Bainbridge, MD not too far from where we are. It was at NAPS where he met his best friend and future classmate another former enlisted Marine, Angelo Fernandez from Brooklyn, New York.

Now Brooklyn, New York and Mission, Kansas are world’s apart but Jack and Angy became roommates and lifelong friends at NAPS. Both Angy and Jack worked hard and entered the class that summer of 1955 with the rest of us. Angy and Jack remained friends and graduated four years later as 2nd Lieutenants in United States Marine Corps. As the saying goes, “Once a Marine, Always a Marine”.

It was in 1967 that they both were engaged in the Vietnam War. Captain Jack Phillip was a company commander and Captain Angelo Fernandez was Assistant Operations Officer of the 9th Marine Regiment. It was in October of 1967 that the Vietcong with overwhelming force mounted an attack to cross the Cam Lo river, in Quang-tri Province, and if it had been successful the enemy force could have overrun the Province.

Captain Jack Phillips’s company was the lead company in defense of that attempted river crossing; the Vietcong did not win that battle and were defeated at the Cam Lo River bridge. The next day, Captain Angy Fernandez was sent from Regimental Headquarters to assess the battlefield circumstances and damage. Angy found his former roommate, Jack Phillips, dead on the battlefield, a bullet had gone through the left side of his flack jacket and penetrated his heart.

Courage is what prevailed in that battle. Courage is what defeated an overwhelming enemy force. Courage by our classmate, a Farm Boy from Kansas and the courage of each one of the more that 125 casualties suffered in that battle. Angy Fernandez completed his walk with Jack Phillips. The Kansas farm boy is back home in Kansas, he is buried in the National Veterans Cemetery, at Fort Leavenworth, Kansas.

(Thanks to Mrs. Elaine Stout, wife of Pete Stout '59, for providing this portion of the memorial service.)

Jack is listed in Memorial Hall as a Captain. He was posthumously promoted to Major, though; this is what is on his headstone, and the other officers listed with him in the 1967 Officer Register are Majors in the 1968 edition.

Jack is one of 32 members of the Class of 1959 on Virtual Memorial Hall.