Extreme left, back row: ENS Newton H. Mason was killed in action against Japanese forces in the Battle of the Coral Sea, May 1942. He was posthumously awarded the Distinguished Flying Cross for his skill and courage in battle. Destroyer escort USS Mason (DE-529) —the first Navy ship with a predominantly African-American crew— and guided missile destroyer USS Mason (DDG‑87) were named after him.

Second from left, back row: LT(JG) Howard F. Clark won a Distinguished Flying Cross (DFC), February 20, 1942, when he brought down an enemy bomber attempting to attack USS Lexington. During the Battle of the Coral Sea, May 1942, he again and again engaged enemy aircraft, in utter disregard of his own safety, until his Wildcat was shot down. LT(JG) Clark was posthumously awarded a second DFC for his heroism during the battle, and destroyer escort USS Howard F. Clark (DE-533) was named after him.

Third from left, back row: ENS Edward R. Sellstrom was awarded the Navy Cross for his "skillful marksmanship and courage" on February 20, 1942, when he intercepted an enemy four-engined bomber, determinedly pursued it through clouds and rain, and assisted in shooting it down despite heavy machine gun and cannon fire; later that day, he intercepted and shot down another aircraft during an attack directed at Lexington by nine enemy bombers. ENS Sellstrom was killed in an airplane crash, June 21, 1942, and destroyer escort USS Sellstrom (DE-255) was named after him.

Fourth from left, back row: LT(JG) Willard E. Eder became a Navy ace, with 6–6.5 confirmed victories (sources differ), and earned the Navy Cross and other decorations. He retired as a Captain in July 1965.

Third from right, back row:ENS Dale W. Peterson was awarded the Navy Cross for distinguished service in intercepting enemy bombers attacking Lexington, February 20, 1942. He was also awarded the Distinguished Flying Cross, posthumously, for his actions during the Battle of the Coral Sea, May 1942, in which he gave his life. Destroyer escort USS Dale W. Peterson (DE-337) was named after him.

Second from right, back row: LT(JG) Marion W. Dufilho was posthumously awarded both the Navy Cross and the Distinguished Flying Cross for his heroism and achievement in the Battle of the Eastern Solomons, August 24, 1942, in which he gave his life. Destroyer escort USS Dufilho (DE-423) was named after him.

Second from left, front row: LT Albert O. Vorse, Jr., became a Navy ace with 10.5–11.5 victories (sources differ). He earned the Navy Cross and other decorations and retired as a Rear Admiral in January 1959.

Third from left, front row: LCDR Donald A. Lovelace won the Distinguished Flying Cross "for heroic conduct in aerial combat, as division leader and pilot, when on 20 February 1942, in enemy waters, he led his division in a vigorous and determined attack, in the face of combined machinegun and cannon fire, against a formation of enemy bombers, and he, with the assistance of his teammate, caused the destruction of one enemy bomber." LCDR Lovelace was killed in a plane crash shortly before the Battle of Midway, while searching for the Japanese naval force. Destroyer escort USS Lovelace (DE-198) was named after him.

Center, front row: LCDR John S. "Jimmy" Thach, VF-3 Commanding Officer. He developed the fighter combat technique known as the "Thach Weave," that enabled the US Wildcat fighter to hold its own against the superior Japanese Zero. LCDR Thach led VF-3 from USS Lexington in early Pacific actions, and from USS Yorktown (CV-5) during the Battle of Midway (June 1942). He attained the rank of Admiral and retired in May 1967. John S. Thach earned two Navy Crosses, among many other decorations. Guided missile frigate USS Thach (FFG-43) was named after him.

Third from right, front row: LT Noel A.M. Gayler was the first person to be awarded three Navy Crosses, and retired as an Admiral in September 1976.

Second from right, front row: LT Edward H. "Butch" O'Hare, first Navy Ace in WW2 and Medal of Honor recipient: on February 20, 1942, he shot down five Japanese bombers and probably saved Lexington. Promoted to Lieutenant Commander, he was later Commander, Air Group Six aboard USS Enterprise (CV-6). He was reported as MIA in November 1943 and declared dead one year later. In addition to the Medal of Honor, he earned a Navy Cross and other awards. Destroyer USS O'Hare (DD-889) was named after him.

Extreme right, front row: ENS Richard M. Rowell received the Distinguished Flying Cross for downing a Japanese plane, February 20, 1942, and won a second DFC during the Battle of the Coral Sea, May 1942, before failing to return from his last mission. Destroyer escort USS Richard M. Rowell (DE-403) was named after him. 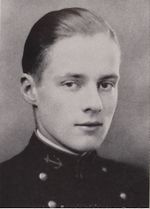 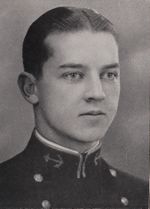 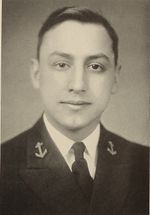 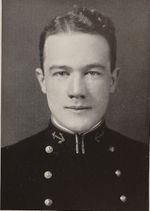 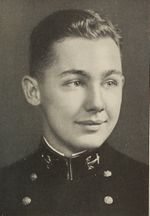 The following 5 pages are in this category, out of 5 total.

Retrieved from "http://usnamemorialhall.org/index.php?title=Category:Fighting_Squadron_(VF)_3&oldid=139020"
This page was last modified at 22:02 on 23 June 2021.
About USNA Virtual Memorial Hall