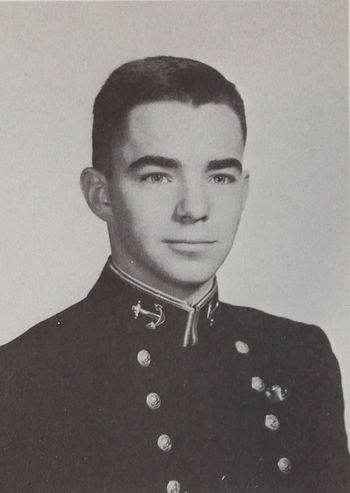 South Milwaukee Senior High was the starting point for the "Bakes" Naval career. Trying to keep track of him was a near impossibility because no one knew what new activity he was engaged in. Varsity sports have eluded the wee tyke but he showed his spirit in a sport where size doesn't matter, Brigade Boxing. Bakes had natural writing and acting talents and second class year was director of Masqueraders. Academics play a major part in his life and he is working towards both Economics and Mechanical Engineering majors. He's decided on Nuclear Power. Success will surely flavor his career.

South Milwaukee Senior High was the starting point for the "Bakes" Naval career. Trying to keep track of him was a near impossibility because no one knew what new activity he was engaged in. Varsity sports have eluded the wee tyke but he showed his spirit in a sport where size doesn't matter, Brigade Boxing. Bakes had natural writing and acting talents and second class year was director of Masqueraders. Academics play a major part in his life and he is working towards both Economics and Mechanical Engineering majors. He's decided on Nuclear Power. Success will surely flavor his career.

David Lyng Baker (Dave) was born 26 April 1945 in Abilene, TX to John Barnard Baker and Caroline Prescott Hoar. Dave’s father was a class of 1936 graduate of University of Michigan Law. He was married to Caroline and working as a corporate attorney in South Milwaukee when WWII broke out. Joining the US Army in July 1942, he was stationed at Abilene Army Air Base when Dave was born. Dave graduated from South Milwaukee High School ]in 1963 and moved on to the US Naval Academy graduating in the class of ‘67.

Upon graduating from the USNA, Dave was commissioned a 2ndLt in the USMC. He reported to Officers Basic School Class 1-68, Alpha Company and was assigned to the 1st Platoon. Alpha Company graduated on 22 November 1967 and Dave was off to Flight school in Pensacola, FL – Helicopter pipeline. Dave married Lynda Margaret Kosbob, an undergraduate at Hook College in Frederick, MD, at some point between the USNA and flight school. Lynda, hailing from Ridgewood, NJ, and Dave were married in Ho-ho-kus, NJ. A good USNA friend Rufus Artmann was in attendance. Dave and Lynda had three children: Timothy, born March 1971 while Dave was stationed at MCAS Santa Ana; Caroline, born April 1972 in Maryland; and Benjamin, born Apr 1977 while Dave was stationed at MCAS New River, NC. Between children 2 and 3, Dave and Lynda traveled and studied in Sweden on a [Olmstead or Fulbright] scholarship. Before leaving for Sweden they were sent to the American University in DC for a crash course in the language.

In 1980 Dave was assigned to the US helicopter test facility at Pax River, MD. On 13 Nov Dave was killed in a helicopter test flight in a Bell helicopter. The accident was attributed to “mast bumping” where the rotor struck the tail resulting in structural failure. Linda, jointly with another wife, sued Bell. She and her three children agreed to accept a multimillion-dollar settlement from Bell — spread over at least 30 years — in exchange for dropping their suit. Lynda passed away on 24 Nov 2003 in Evanston, IL.

Dave [Baker] and Brian [Casey] were in my wedding party on November 26, 1967. Both of them, along with four other of my TBS “friends” Shanghaied me the night before the wedding, and I recall it was Dave and Ken Bruner who were the ring leaders. Dave became a favorite of my sister in law at the wedding, and they danced most of the night. However, Dave had a serious girlfriend at the time, whose name, regrettably, I don’t recall, because they were talking marriage after Dave finished flight training. I lost touch with both guys shortly after, as we went our separate ways, but heard about Brian’s death. Ironically, I didn’t know about Dave’s passing until I saw it in the info circulated for the reunion. Really sad about both of them. Mike Barretti

I did not meet Lynda until she and David moved in with Alan [DeCraene] and me in California when the guys were starting helicopter training [at MCAS Santa Ana CH-46 June 1969]. Alan made the arrangements with David because they had two Irish Setters and we would be finding housing that would accommodate our two dogs, so they and the dogs could stay with us (and let me babysit the dogs) while they looked for housing. For some reason we were scheduled to arrive in CA a week or two before David & Lynda.

While we were in CA, David & Lynda rented a house and Alan & I helped them construct a fence for the yard for the dogs. One was a registered show dog and we went to dog shows with them in Bakersfield and in San Diego. During that time I became able to hear an announcement for “9-12 puppy bitches report to ring 3” without blushing. Alan & I got hooked on dog shows and decided to get an English Setter when he came back from Viet Nam. I located one and brought her home about 4 months after Alan was killed. Bob & I showed English Setters from then until about 1982, all from David’s introduction to the sport.

David Baker was a good guy and a particular help to me when Alan was killed. Alan let me know a lot about what he was doing and how different “watches” worked. I knew he shouldn’t have been on the particular assignment he was on the night he was killed. Lynda told David about my questions and he researched it and got the information to me. He was also able to give me favorable information about the double-amputee they were trying to get the blood to. Alan was still lost to our son and to me, but I knew he was doing exactly what he thought he was meant to be doing. It helped. Becky DeCraene

David is one of 34 members of the Class of 1967 on Virtual Memorial Hall.

The "category" links below lead to lists of related Honorees; use them to explore further the service and sacrifice of the alumni in Memorial Hall.
Retrieved from "http://usnamemorialhall.org/index.php?title=DAVID_L._BAKER,_MAJ,_USMC&oldid=88090"
Categories: