Freeman Hopkins Crosby was admitted to the Naval Academy from New York on July 30, 1886 at age 17 years 8 months. 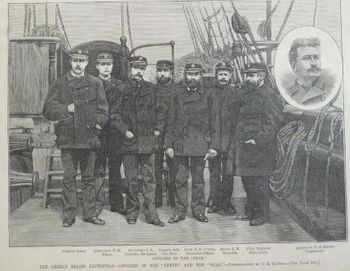 Freeman in a group photo from Harper's Magazine.

Freeman died with four others on a whaleboat from the coast survey steamer McArthur on August 18, 1894. It capsized while making a landing through the rough surf at Jo creek, 15 miles north of Gray’s Harbor, Alaska. The other men were John Fryer, Jens Gudmundsen, William Nehm and Alexander Smith. The group was to land and erect a hydrographic signal station. They had come into the shore daily without any mishap. Two breakers hit the whaleboat, the last throwing it ten feet high and turning the boat over. Freeman was last seen swimming for the whaleboat, but he sank and drowned. Mr. W. M. Kenney was thrown off when the first breaker hit and survived to give the account. He didn’t like the breakers, and Freeman had laughed and tossed him a life preserver to put on. Kenney said that they watched as Alexander Smith waved and said his last words: “Good-bye boys, I am going.”

Freeman was survived by his wife Julia Halsey, whom he had married on December 18, 1884, and their children Halsey, born in 1887, and George, born in 1892. When Freeman died, his family was living in Ocosta, Washington. They moved to Binghamton, New York, where she received a widow’s pension of $25/month. In 1897, it was raised to $35/month with $2/month extra per child until they reached the age of 16. Julia died on October 5, 1935.

Born in Poland, New York, Freeman lived with his father Elikman, mother Angelina, brother Walter, and sisters Ellen, Kate, Emma, Anna and Mabel. Additionally, by his father’s first wife, his brothers were Alonzo, Henry, and Erastus, and his sister was Cornelia, a schoolteacher. By 1880, the year his father died, the family lived in Jamestown, New York.

The family was friends with the family of Albert Sprague, Class of 1866, and they lived two miles apart. His daughter Katherine remembered Freeman often waving hello on his way home. She wanted to write a biography of Freeman for the Chautauqua County Historical Society. When Freeman came back from the Greely rescue in 1884, she remembered that a dinner was held in his honor in Jamestown, and he spoke with the high school students. Freeman was executive officer of the Bear, one of four vessels in the Greely rescuing expedition. Known as the Lady Franklin Bay Expedition 1881-1884, it was led by Lieutenant Adolphus Greely. Of the original 25 men, only 7 survived the expedition to the Arctic.

Freeman was commanding officer of McArthur (1874) (which was not a navy ship but owned by the United States Coast and Geodetic Survey).

Freeman is not included with his classmates in Memorial Hall. This omission was discovered by researcher Kathy Franz.

Charles is one of 5 members of the Class of 1870 on Virtual Memorial Hall.

The "category" links below lead to lists of related Honorees; use them to explore further the service and sacrifice of the alumni in Memorial Hall.
Retrieved from "http://usnamemorialhall.org/index.php?title=FREEMAN_H._CROSBY,_LT,_USN&oldid=125698"
Categories:
Hidden category: