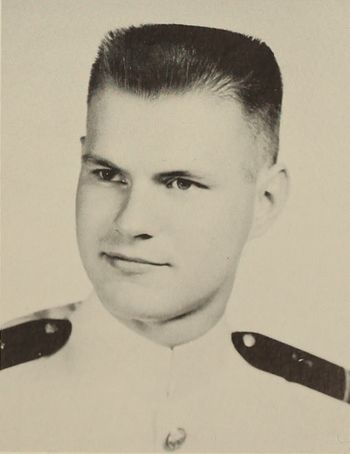 "Ozzie" came to the Naval Academy from sunny Florida by way of Fishburne Military School and the University of Florida. Possessing a never-tiring love of travel and action, this converted Yankee tried to pack as much as possible into his career at USNA. Known throughout high school and college as an outstanding basketball player, Ozzie found squash to be his favorite sport at the Academy. Being very versatile, he also included in his activities the Foreign Relations and Aeronautical Engineering clubs and the 1960 Newport to Bermuda Race aboard the yawl Resolute. During leave periods, he took advantage of voluntary assignments at Pearl Harbor and NAS Sanford, Florida. Quick thinking, determination, and dedication to the Navy assure Jeff's success.

"Ozzie" came to the Naval Academy from sunny Florida by way of Fishburne Military School and the University of Florida. Possessing a never-tiring love of travel and action, this converted Yankee tried to pack as much as possible into his career at USNA. Known throughout high school and college as an outstanding basketball player, Ozzie found squash to be his favorite sport at the Academy. Being very versatile, he also included in his activities the Foreign Relations and Aeronautical Engineering clubs and the 1960 Newport to Bermuda Race aboard the yawl Resolute. During leave periods, he took advantage of voluntary assignments at Pearl Harbor and NAS Sanford, Florida. Quick thinking, determination, and dedication to the Navy assure Jeff's success.

Jeff was lost when his F-8 Crusader crashed on September 24, 1965, immediately following takeoff from USS Bon Homme Richard (CV 31). He was a member of Fighter Squadron (VF) 194.

The ship was operating on Yankee Station and he was departing on a combat mission.

Jeff was survived by his widow, Joyce Ann Osborn of Pensacola, FL, and his parents, Clarence Holmes and Bonnie Osborn of Winter Park, FL.

“Jeff” was a member of All Saints Episcopal Church and graduated from Winter Park High School in 1956 where he played basketball all four years and football as a freshman.

In the 1957 Fishburne Military High School yearbook, he was in the A Company. Matriculated 1957. Bus driver, have you joined the “UNION?” – Great SCOTT – who are you? – another Hall Hound. President of the Y. M. C. A. 1; Order of Saint George 1; Varsity Basketball 1; Varsity Baseball 1; Waiter 1; Key Club 1; Advanced Public Speaking 1; Bus Driver 1; Merit List 1. Class Will: my BARITONE voice to Ray Sink along with my “G. I.” haircut with hopes that no one will tease him.

He had been in Viet Nam for the last 15 months and received four air medals the previous week for missions accomplished. He also served as landing signal officer for the Bonhomme Richard.

In December 1965, his mother wrote a letter to Congressman A. S. (Syd) Herlong, Jr. of Leesburg who had appointed Jeff to the Naval Academy.

This will be a sad letter but one which is filled with gratitude to you for having helped Jeff attain his dream by appointing him to the Naval Academy at Annapolis. You may think that odd for me to be grateful now that Jeff has died but you will never know the happiness that was Jeff’s from the day he became a Plebe to the day he died. His fellow officers attest to that. My child’s happiness was paramount to Clarence and I. I am sure that if Clarence had lived he would tell you too, that he would be eternally grateful to you for having given Jeff his chance.

This tragedy which is beyond comprehension in its depth as brought endless sorrow to many and nothing can change this. No words can erase the suffering even slightly.

It avails little to say that this young officer of superior endowments was the gallant, heroic son of a noble, loving father. That he knew the principles he lived for and fought for are much more than most can say; that he died for those principles marks him as a martyr for the causes of decency and humanity. Yet, there is no consolation for me in these thoughts, for I have lost a beautiful, strong son of infinite worth, and earth offers no substitute for him.

I was so relieved when I learned that Jeff’s next cruise would be to the Mediterranean, and filled with apprehension and foreboding when he told me he had requested permission to return to Viet Nam – asking me to please understand. He explained that America had to take a strong stand in Viet Nam; otherwise, the Viet Cong would take over, and this he was trained for – to help make freedom strong. He told me he loved flying, that he was aboard the ‘best damn ship in the Navy, we have the finest officers and men – I love them all’ …

This beautiful American; this beautiful fighter pilot who had over 200 missions to his credit; this beautiful young officer who had received his fifth Silver Star the day before he died; this uncommon man – this individual who had such personal distinction has left to be with his dad in a better place.

I am thankful that Jeff came into our lives because our lives have been made the richer having known him, and I am proud of the principles and convictions that were so strong in Jeff. He was a man who could stand up and be counted. Yes, he was a man.

My heart is filled with grief only because I will never feel his arms around me again – never hear him laugh, but I thank you most sincerely for helping my son to realize his dream. He crammed so much into his young life. How many of us are there who can say: ‘I have reached complete happiness’ – Jeff did. For this I thank you.

Congressman Herlon said he “never received a sweeter or more appealing letter than this one.” He planned to send copies of the letter to President Johnson and to the secretary of state. He also planned to enter it into the Congressional record.

Geoff was the first friend that I lost in Vietnam. Our parents were good friends in New York and thus he was a childhood friend. He was the first boy to give me a "kiss" in the third grade -- something we laughed about when we were grown. The last time I saw him was walking across the grounds of the US Naval Academy at Annapolis -- standing straight and tall in his uniform. You lose a piece of your childhood when a friend is taken that early in his life.

You are not forgotten, Geoff. Your sacrifice is remembered and appreciated even today. LESLIE WRIGHT DOW, 12/11/01

Jeff is among those names on the Vietnam Veterans Memorial in Washington, D.C.

He has a cenotaph in Honolulu.

Geoffrey is one of 30 members of the Class of 1962 on Virtual Memorial Hall.

Retrieved from "http://usnamemorialhall.org/index.php?title=GEOFFREY_H._OSBORN,_LTJG,_USN&oldid=134532"
Categories:
Hidden category:
This page was last modified at 13:20 on 5 November 2020.
About USNA Virtual Memorial Hall