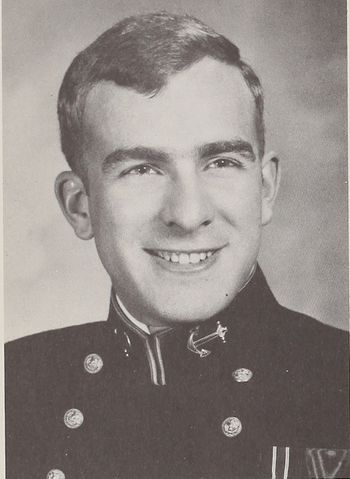 Born in San Diego, “Rick” Pilger came to Annapolis after an illustrious athletic and academic career in North Syracuse, NY and quickly established himself as one of the best-liked guys in the Company. Tough both physically and mentally, he was a standout in math and in all sports, especially soccer. He was a truly gifted leader and was Company Commander First Class Year, an honor he truly deserved. Rick was always upbeat, exuding “perpetual cheerfulness” in the words of one classmate, and had a great sense of humor with a distinctive laugh and voice that had a bit of a Great Lakes twang. One classmate remembers visiting Rick in the hospital after he’d broken his jaw playing soccer and seeing Rick with his jaw wired shut playing chess with another Mid who also had his jaw wired shut, the two of them arguing over something and waving scissors, each threatening to cut the other guy’s wires. Even the nurses laughed at the absurdity of it. Rick was the kind of guy everybody liked being around, with an easy going charisma that made you want to follow him. He had a beautiful powder blue TR-6 First Class Year and, inspired by Major Kostesky, went Marine Air, receiving his wings in April of 1972. He married Debbie Wadsworth in June 1970 and they had a daughter, Abigail.

1st Lieutenant Henry N. “Rick” Pilger tragically died in the service of his country of injuries from a helicopter crash during a NATO exercise on Grytoga Island, Troms County, Norway, on September 23, 1972, while attached to Heavy Helicopter Squadron 461, Det. “S.” He was the co-pilot.

Rick’s death was a shock to his classmates and a reminder of the high cost of freedom. While his star shone brightly for too short a time, all who knew him know that had he been granted a full life there was no upper limit to what his accomplishments might have been. He is greatly missed.

Henry was survived by his wife, "he leaves his parents, Mr. and Mrs. Bernard Pilger of North Syracuse N.Y.; a daughter Abagail Pilger at home; three brothers, Bernard Pilger with the Navy in Hawaii, Gregory Pilger and Dennis Pilger, both of Syracuse, N.Y.; and a sister, Marie E. Pilger, also of Syracuse, N.Y." He is buried in the Riverside Cemetery of Farmington, Connecticut.

This story starts with a doctor from northern Norway hunting grouse on the remote island of Grytøya off the coast.

Hans Krogstad happened to look down and couldn’t believe what he saw wedged between two rocks by his feet, something very out of place in that desolate landscape.

It was a gold ring bearing a blue star sapphire. He pried it out and studied it. It bore the insignia of the U.S. Naval Academy, Class of 1970. Engraved inside was the name: “Henry N. Pilger.”

Krogstad’s accidental discovery in 1993 and his desire to return the ring to the Pilger family launched him on a long path of twists and turns, dead ends and strange coincidences.

This year, 28 years later, it led him to a woman named Abigail “Abby” Boretto, who lives in Poway.

But I digress. As they say of life, it is not the destination but the journey that is the true adventure.

On that fateful day, Krogstad also had found some fragments of metal and a green military glove with missing fingers. From island locals, he learned of the fatal crash of a U.S. Marine helicopter on the stony mountain 21 years earlier.

Krogstad told his story to Simen Loholt, a friend of his son. Loholt is a reporter for iHarstad, an online publication covering the city of Harstad, with 27,000 inhabitants in northern Norway.

Loholt wrote about the discovery and shared the story with me.

I recently contacted Krogstad, who told me: “My first thought was that this ring must be returned to the family because maybe the pilot had a wife or children who might like to have the ring back.”

But that was not easy. He learned that the U.S. military, not Norwegian authorities, had investigated and removed the crash debris. So, he contacted a friend working at the American embassy in Stockholm, Sweden.

His friend, in turn, reached out to the U.S. embassy in Oslo, Norway. The crash was reported to have occurred during a NATO exercise 21 years earlier, and Pilger’s widow had remarried. They didn’t know of any children. In 1993, computer searches weren’t as advanced as they are today.

A Navy commander at the embassy told Krogstad that he wore the same ring and would make it his mission to return the ring to Pilger’s family.

That was the last Krogstad heard about it, until this year. His query to the embassy weeks later went unanswered. Life went on.

Across the globe, in San Diego, Abby Boretto was preparing last year for her 50th birthday party to be held this year. The mother of three grown children works as a model, does volunteer work and wears the crown of Mrs. All-Star California 2021.

During the pandemic, she began preparing for her half-century milestone by exploring memory boxes of photos, letters and other memorabilia.

“I wanted to take time to learn where I’ve been, what I learned and where I’m going,” she explains. “I have struggled my whole life with ‘Who am I?’ and What am I here to do?’”

She was 15 months old when her father died, so she has no memories of him. Her mother remarried when she was 8, and she grew up in a loving, supportive family. Nevertheless, she says her dad’s passing left a void in her heart. His absence was a missing piece of her life puzzle.

“My father wasn’t unthought of, but because he died when I was so young, he was always there — but never there. So life went on.”

Relatives occasionally remarked that her mannerisms, her bigger-than-life personality and her nose and facial structure reminded them of her dad, whom they called “Rick.”

“Oh, my God, you look just like your father right now,” she was told on several occasions.

Her dad was a rising star. He had been recommended for the Naval Academy by Robert F. Kennedy (that letter is in Boretto’s memory box). He had been named a company commander during his first class year and was nicknamed “Captain Easy.”

The Naval Academy Class of ’70 40th reunion book describes him as a standout in math and all sports, a gifted leader and “the kind of guy everybody liked being around with his easy-going charisma.”

When Boretto was young, her mother, since deceased, gave her the U.S. Naval Academy sweetheart ring given to her by her husband. t was a smaller version of Pilger’s ring, except the blue star sapphire was circled by small diamonds. The ring represented both her mother and father.

She wore it, that is, until she was swimming while on vacation in Hawaii and it slipped off her finger. The ring was forever lost in the ocean despite efforts to recover it.

In her memorabilia, she found her dad’s last postcard to her mom, written four days before he perished. She emptied a brown envelope her mother received in 1994 that contained his class ring and a letter from Dr. Hans Krogstad explaining where he had found it. Boretto felt guilty that no one had written to thank him.

Believing it’s never too late to say thank you, she jumped on her computer and tried to hunt down Krogstad. A Norwegian magazine article mentioned him, so she wrote to the magazine but never got a response.

Just before her 50th birthday party in mid-June, she listened to a voicemail from the Naval Academy. It said, in part: “We’re calling about your father and his class ring. Are you in possession of it?”

She thought the message was a bit strange since she’d had the ring for 27 years, but this whole saga had a mysterious aura.

What Boretto didn’t know was that Krogstad was trying to find her at the same time. In May, he had a chance run-in with a friend who had taken photos of the ring after he found it. Could he still get copies, Krogstad asked?

He got them. A few days later, his friend also emailed some pictures of Pilger and his obituary following the 1972 helicopter crash.

Once again, Krogstad approached the American embassy in Norway to try to discover the whereabouts of the ring. “I thought it would be a shame if that ring was still sitting in a drawer in the embassy.”

He also contacted the Norwegian Accident Investigation Board, where someone agreed to look into it. After a bit of detective work, he was informed that the ring was with Pilger’s daughter, Abigail, in San Diego County.

“Between 1993 and May of this year, I didn’t know that Abby even existed ... I’m so delighted to know that this woman has the ring,” Krogstad told me.

Boretto and Krogstad have not yet met or directly spoken to one another. Reporter Loholt has been the go-between, sharing information and updating both.

The next chapter in the story will be a face-to-face meeting next May in Norway, where Krogstad has offered to escort Boretto to the crash site.

She already has begun to search for families of the other crash victims (five were listed in the U.S. Marine accident report), and has been in touch with her dad’s Naval Academy classmates and reconnected with members of his family.

“I’m meeting my father for the first time,” says Boretto, who likens it to an adopted child meeting a birth parent as an adult. “It’s exciting, emotional, happy, a mystery — so many things wrapped into one.”

Henry is one of 20 members of the Class of 1970 on Virtual Memorial Hall.

Retrieved from "http://usnamemorialhall.org/index.php?title=HENRY_N._PILGER,_1LT,_USMC&oldid=144328"
Categories:
This page was last modified at 10:53 on 13 November 2021.
About USNA Virtual Memorial Hall