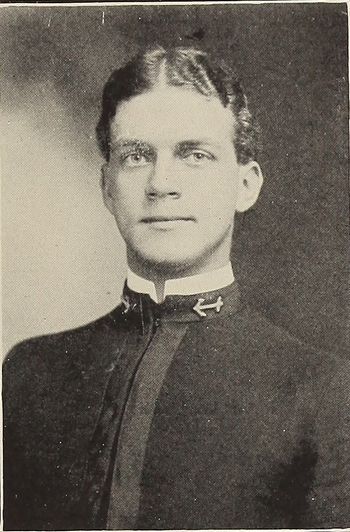 Recovered from an operation in the U. S. N. A. hospital! A strong man with a rare capacity for food and sleep. While caressing his wife "Delia" broke her nose in three places. Our ideal of a dashing midshipman—dashing to formation in a race with the bugle.* When really happy plays funeral dirges on his fiddle, and has been known to break forth in to melodies of the Sunny South. A divine dancer with a sister in every port and an extensive grease in old Annapolis. Roomed with "Buoy" for three years without accumulating his exact habits. "You scoundrel!"

Recovered from an operation in the U. S. N. A. hospital! A strong man with a rare capacity for food and sleep. While caressing his wife "Delia" broke her nose in three places. Our ideal of a dashing midshipman—dashing to formation in a race with the bugle.* When really happy plays funeral dirges on his fiddle, and has been known to break forth in to melodies of the Sunny South. A divine dancer with a sister in every port and an extensive grease in old Annapolis. Roomed with "Buoy" for three years without accumulating his exact habits. "You scoundrel!"

Born October [sic], 1884, New Orleans, Louisiana. Appointed from Louisiana. "Padre" was a man of great charm and dignity. He had a firm but very tolerant disposition and was among the most popular men in the Class. His fine physique made him a natural athlete. He came very near to death after being kicked in the head during an intercollegiate football game. After graduation he was attached to the USS North Carolina, and was promoted to the rank of Ensign. It is a coincidence that another accident cost him his life. He was killed by an explosion of fire damp, in a coal bunker of the North Carolina, while coaling ship on 11 July, 1909 [Aiken went under deck ahead of his men to investigate an accumulation of fumes generated by the stored coal]. He is buried in his home town of New Orleans (Metairie Cemetery). The Aiken School, well known in New Orleans, is directed by Padre's sister Edith.

From US War Archives:

On the occasion of Pres. Taft's visit to New Orleans, he referred to Lieut. Aiken in the following words: "But as I stand in the presence of a New Orleans audience, as I stand in an academic atmosphere, I cannot refrain from allusion to the heroic death recently met by a young, bright, able man of your community, Lieut. Aiken of the navy. He saw his dangerous duty, and, with his men under him, thoughtful of their safety, he led them into the place of danger, fell and was overcome, and the only thought he had as he was about to meet his death was, as he asked his commanding officer: 'Have I made good?' It is such standards of living and of dying that I think are inculcated not only at West Point and at Annapolis, but in all academic institutions, of which this Tulane is one of the best examples. And I am glad, in the presence of his neighbors--the neighbors of his father and of his mother, as commander-in-chief of the navy, to pay this tribute to his memory."

The following beautiful tribute to this young officer was published: "There are sorrows of such wide significance, that when they come into our midst, the minor chords are struck as by a master musician, and the penetrating pathos of the notes find response in every heart.

We would not draw aside the veil to whom the right belongs to mourn, but we, too, who stand without, are dim-visioned from the mists of sympathy.

We, too, would add a wreath of laurel to the wreaths already there--the 'honor wreaths' for the 'gallant officer and gentleman,' who walked in honor's path, and in his youth, ere life's sun had reached meridional glow, saluted, at last command--received his passport to eternity--and entered into new fields of action, 'where winged souls fly beyond all change, in the eternal distance to perfected life.'

For him, 'all's well.' For those who mourn, 'all's well,' for his life, like a broken column, gleams in unsullied whiteness, unmarred by stains of sin, or rude chisel of dishonor. The honors of country and foreign power have been paid him. The flag at half-mast--the wreath of honor--the pall of the flowers, bedewed by sweet affection. And from the bugle's silver-throat, the long, last, farewell note-the call to rest-for 'all's well'-when 'He giveth His Beloved sleep.'

A wreath of laurel, to the memory, of Ensign Hugh K. Aiken, U. S. N., 'gallant officer and gentleman', who died in his youth." The classmates of Lieut. Aiken have placed a tablet to his memory at Annapolis Naval academy, upon which is inscribed: "In memory of Ensign Hugh Kerr Aiken, U. S. N., who was killed in the performance of duty on board the United States cruiser, North Carolina, in the Bay of Naples, July 11, 1909. 'And so this man died, leaving his death an example of courage, his life a memorial of virtue.' Erected by his class mates of 1906.

Hugh's classmates erected a plaque to his honor in Memorial Hall. It reads in part: "This man died, leaving his death an example of noble courage, his life a memorial of virtue."

Hugh is one of 8 members of the Class of 1906 on Virtual Memorial Hall.

The "category" links below lead to lists of related Honorees; use them to explore further the service and sacrifice of the alumni in Memorial Hall.
Retrieved from "http://usnamemorialhall.org/index.php?title=HUGH_K._AIKEN,_ENS,_USN&oldid=116317"
Categories: