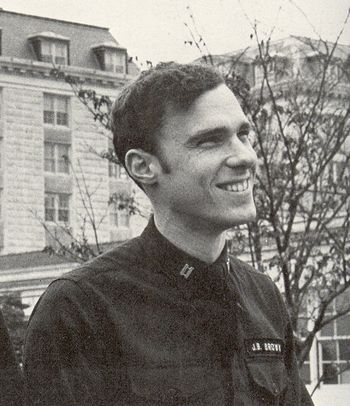 JB is an extraordinary person, for he is always willing to lend a hand when he can and he is devoted to his friends and the service.

JB is an extraordinary person, for he is always willing to lend a hand when he can and he is devoted to his friends and the service.

From Life on the Kitty Hawk:

28 Nov 1979: Kitty Hawk arrived in the vicinity of Diego Garcia, British Indian Ocean Territory. NL 626, an EA-6B (BuNo 158541), CDR Peter T. Rodrick, squadron CO, LCDR William J. Coffey, LT James B. Brown, Jr., and LT(JG) John R. Chorey, VAQ-135, launched for a scheduled electronic support measures (ESM) mission, at 1324, at 07º33’S, 073º19’E. Kitty Hawk was under EMCON A conditions, which prohibited electronic emissions from either the ship or the Prowler. Within two minutes the Prowler passed close abeam of guided missile cruiser Jouett (CG-29), about eight nautical miles ahead of the carrier. The EA-6B suddenly executed a “near vertical climbing turn,” partial cloud cover obscuring further observation of the aircraft, though it is surmised that the crew was practicing a “low level ingress tactic.” Though not verified, it is believed the Prowler impacted the water at approximately 13 miles off the port beam of Kitty Hawk, 63 nautical miles from Diego Garcia, at 1505. Despite determined efforts by two SH-3Hs from the carrier and a Lockheed P-3 Orion from Diego Garcia, none of the men were recovered.

Peter Rodrick '64 was also lost in this crash.

James is one of 10 members of the Class of 1973 on Virtual Memorial Hall.

The "category" links below lead to lists of related Honorees; use them to explore further the service and sacrifice of the alumni in Memorial Hall.
Retrieved from "http://usnamemorialhall.org/index.php?title=JAMES_B._BROWN,_JR.,_LT,_USN&oldid=105901"
Categories: