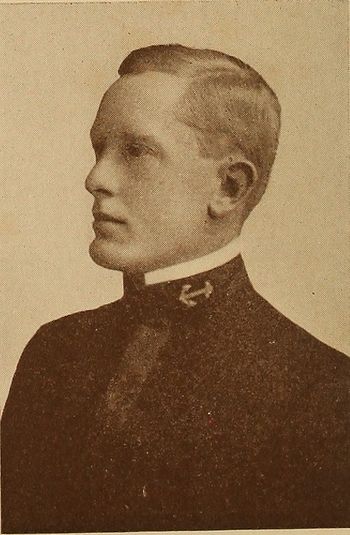 Buck's pride, the tow-headed boy lieutenant, a firm believer in militarism and the proud possessor of the original army brace which becomes harmlessly defiant in the section room. Stood one in conduct (2) and this made his only enemy, Honest John. Took care of "Rats" Lowell for a year, and rates a 4 in patience for other reasons too. Our nearest approach to the ideal of Church's Phoenician poet. Quite a traveler for his years, and loves to spin long yarns of hair-breadth escapes in foreign lands. Survived with unruffled temper a summer as three striper of A Section. "Pipedown."

Buck's pride, the tow-headed boy lieutenant, a firm believer in militarism and the proud possessor of the original army brace which becomes harmlessly defiant in the section room. Stood one in conduct (2) and this made his only enemy, Honest John. Took care of "Rats" Lowell for a year, and rates a 4 in patience for other reasons too. Our nearest approach to the ideal of Church's Phoenician poet. Quite a traveler for his years, and loves to spin long yarns of hair-breadth escapes in foreign lands. Survived with unruffled temper a summer as three striper of A Section. "Pipedown." 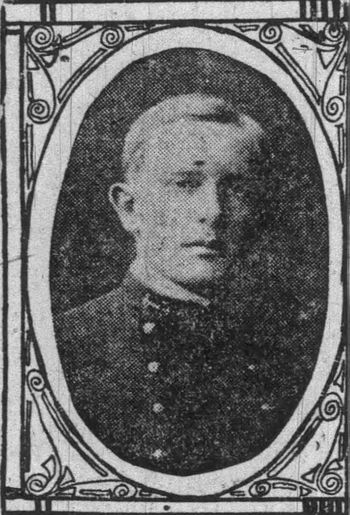 James died on July 19, 1907, when he succumbed to injuries sustained on the 15th when the aft turret of USS Georgia (Battleship No. 15) exploded during target practice near Cape Cod.

He was survived by his parents and brother; He is buried in Arlington National Cemetery.

His own unselfish words when aid was offered make his epitaph: "Never mind me, I am all right. Look after those other fellows."

James was appointed to the Academy by Congressman Stark from the Fourth Nebraska district. His father was chief quartermaster of the department of the Missouri with headquarters in Omaha, Nebraska. James’ rival for an appointment from Kentucky was classmate Faulkner Goldthwaite. James’ brother was Frederick, a West Point graduate, and his son Captain James Hamilton Cruse, born eight years after James’ death, was a Naval Academy graduate in 1937. James’ uncle and aunt were Colonel and Mrs. F. G. Hodgson of Philadelphia.

At the Academy, James was a cadet lieutenant commanding one of twelve companies. In his class of over 200, he stood second in ordinance, fourth in modern languages and ninth in seamanship. He also stood first in conduct, a very distinguished honor. He was a fine gymnast being on the team all four years.

The explosion on the Georgia happened on a Monday, and by his willpower, James lived to see his parents arrive on Wednesday, but he eventually succumbed on Friday. The newspaper reported: “that it was just what might have been expected from ‘Jimmy’ Cruse, declared one of the young midshipman’s former Omaha companions. He certainly was a boy with plenty of nerve. His friends knew him better by his strong will power than in any other way. All the boys said he would ‘make good’ when he went to Annapolis, and it will please them all to know of his display of heroism following the accident on the Georgia.”

James’ body laid in state at Gawler’s chapel on Pennsylvania Avenue. The Marine band and companies A and B formed the funeral escort. The band played “Nearer, My God, to Thee.” The casket was draped with the Union Jack and completely covered with beautiful flowers. A commissary department wagon, filled with floral tributes, followed the carriages. Among the flowers was a magnificent cluster of white magnolias, tied with broad white satin ribbon, sent by the president and Mrs. Roosevelt. Attending the services were Admiral Cowles, Rear Admiral Williamson, Rear Admiral W. L. Capps, Q. M. Gen. Aleshire, Capt. W. F. Halsey, Commander J. J. Knapp, Commander F. C. Bieg, Capt. R. F. Nicholson, and Maj. C. G. Long. James’ cap, epaulettes, and sword were laid on the casket as it was lowered into the grave, which is in one of the most beautiful spots of the cemetery. The ceremonies ended with the sounding of “taps” by a bugler.

Caspar Goodrich '01 and Faulkner Goldthwaite '07 were also killed in this explosion.

A plaque in Memorial Hall in honor of James and the nine other officers and men lost was erected by "their shipmates on the Georgia and sympathizing friends on the U.S.S. New Jersey."

James is one of 13 members of the Class of 1907 on Virtual Memorial Hall.

The "category" links below lead to lists of related Honorees; use them to explore further the service and sacrifice of the alumni in Memorial Hall.
Retrieved from "http://usnamemorialhall.org/index.php?title=JAMES_T._CRUSE,_MIDN,_USN&oldid=124650"
Categories:
Hidden category: