Michael Daniel Noell was admitted to the Naval Academy from Pennsylvania on September 15, 1875 at age 17 years 5 months. 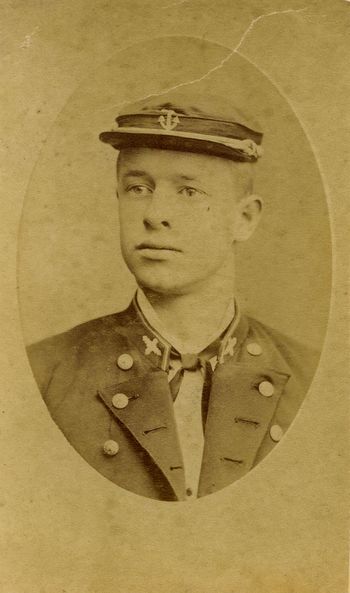 Michael D. Noell, a naval cadet, died at the residence of his father, in York, early Tuesday, January 1st. He entered the naval academy at Annapolis, Md., as cadet engineer, U.S. N., in May, 1876. Whilst aboard the U. S. cruising ship Mayflower, at Philadelphia, during the centennial, he accidentally fell through the hatchway of the vessel and sustained injuries, from the effects of which he died on the first day of the year 1878.

Noell was a young man of great promise, and bid fair to make an exceptional record in his calling. He was a son of Professor D. K. Noell, who for many years alternately taught the public schools of Shepherdstown and Centre Square, Cumberland county. Young Noell was born at the latter place and will be well remembered by many of the citizens of that locality.

On August 15, 1876 the York Daily reported his injury and that he was at the hospital for treatment. He was well enough to return to the Academy at some point that academic year, though, as he ranked 7 of 27 following June 1877 examinations. By September 1877, however, he was "confined to his room and bed" because his "suffering was great and almost continual, all of which he endured with patient resignation. He enjoyed a large circle of acquaintances here and elsewhere, who will regret his early demise."

Michael is buried in Pennsylvania.

Michael’s father Professor Daniel K. Noell (1820-1898) was a public school teacher and the first mayor of York, Pennsylvania. His mother was Anna, and his sister Matilda died young. His brothers were Jacob, Charles, and York.

Jacob (Class of 1865) and York (Class of 1874) both graduated from the Naval Academy and went on to long careers. Jacob died a Lieutenant-Commander on December 31, 1917, in Tacoma, Washington. He was due to be promoted to Captain the next day. York died on April 23, 1908, as a Commander at the Navy Yard in New York.

Michael’s family lived in Upper and Lower Allen Townships before moving to York. Michael worked in the Morris Drug Store until September 1875 when he entered the Naval Academy. He was stationed on the practice steamer USS Mayflower during the centennial celebration in July 1876 in Philadelphia. He fell through the hatchway of the steamer and developed an abscess. He was bedridden until he finally died on January 1, at his father’s home.

His classmates published the following in the York Gazette:

January 7, 1878: At a meeting of the Cadet Engineers of the class of 1879, held in consequence of the death of Michael D. Noell, the following resolutions were unanimously adopted:

WHEREAS, God, in his Providence, has been pleased to remove our friend and classmate, Michael D. Noell, therefore,

Resolved, that we respectfully tender our heartfelt sympathy to his family in their bereavement.

Resolved, that, in the death of Mr. Noell, the Navy has lost one whose abilities and determined spirit would have made him a talented and valuable officer.

Resolved, that the class has lost a man, beloved and respected by all, and one whose sterling worth endeared him to all with whom he came in contact; and that his many good qualities and the pleasure of having been associated with him will cause his memory always to be tenderly cherished.

Resolved, that a copy of these resolutions will be sent to the family of our late classmate.

Michael is not included with his classmates in Memorial Hall, though his death was widely reported to be the (delayed) result of the injuries he sustained in an operational accident. This omission was identified by researcher Kathy Franz.

Michael is one of 4 members of the Class of 1879 on Virtual Memorial Hall.

The "category" links below lead to lists of related Honorees; use them to explore further the service and sacrifice of the alumni in Memorial Hall.
Retrieved from "http://usnamemorialhall.org/index.php?title=MICHAEL_D._NOELL,_CADET_ENGINEER,_USN&oldid=131112"
Categories:
Hidden category: