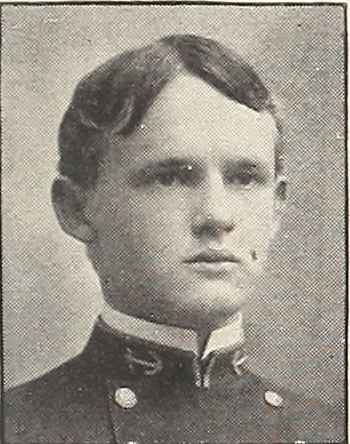 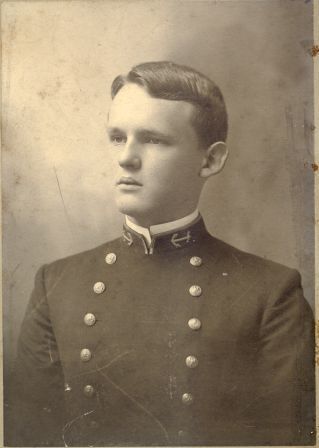 Newman was lost on July 21, 1905 when the boilers aboard USS Bennington (PG 4) exploded. The ship was in San Diego Harbor and he was officer of the deck at the time. Sixty-five enlisted men were also lost (Newman was the only officer killed).

Ensign Newman K. Perry was the officer of the deck at the time of the explosion. He was found in the wheelhouse fearfully scalded but conscious. When the rescuing party picked him up he raised on blistered hand, burned to the bone, and called out: "Hold on, boys, I can help myself."

In his pain this brave man remembered the wife he left in Honolulu, and when he was being transferred to the hospital he dictated a telegram, requesting it to be sent at once. This is the message the gallant officer dictated between groans of agony:

Three hours later the soul left his tortured body. America has had many a naval hero, but the name of Newman K. Perry should stand high on the list. He died as a brave man should die, an honor to his country and an honor to his flag.

This account was immediately below the masthead; the entire front page of the paper was devoted to articles on the disaster.

Springfield, Mass, August 4 - the burial of Ensign Newman K. Perry of the Bennington took place with military honors in the cemetery at Stockbridge, Massachusetts this afternoon. The services were simple in the extreme, consisting only of the prayers at the home of Mrs William D Doane, Mrs Perry's mother, and a committal service at the grave. The services were held at 5 o'clock, at which hour Company F Second Massachusetts regiment under Capt John Nicholson, marched to the house and stood at present arms at the doorway. After the reading of the prayer in the presence of only the family and a few friends, the casket, draped with flags, was placed on an open wagon and escorted by the militia, and the march to the cemetery was begun. From the time of the start to the time of arrival at the cemetery, the chimes in the church tower were rung.

Four non-commissioned officers acted as pallbearers. After the casket was lowered into the grave, three volleys were fired by a firing squad from Company F, and taps were sounded by the bugler.

Honored By His Native City, there was a great profusion of flowers and a large wagon which had a place in the funeral procession was laden with them. One of the most beautiful was a piece from the citizens of Columbia, SC. this was a large mounted wreath six feet in height. The design was shaped as near as possible like the palmetto tree; the base was made of palm leaves, and the top of very handsome white roses and lilies-of-the-valley. At the bottom was a broad white ribbon, on which was printed in gold letters: From the Citizens of Columbia, SC. This State insignia was repeated in many of the floral pieces. A brother of Ensign Perry from Columbia was present.

Newtion Kershaw Perry enlisted in the Confederate army at the age of 16 and with his brother served four years in the company from his native county. Lieutenant Perry's four uncles on his maternal side, John G Mayrant, William R Mayrant, James S G Mayrant, and Robert Pringle Mayrant enlisted at the beginning of the War Between the Sections and Robert and James served until the final surrender. John and William gave their lives for the cause they espoused.

Mr Perry's maternal grandfather, Robert Pringle Mayrant, was appointed midshipman in the United States Navy in 1828 by the president, John Quincy Adams. He was appointed through the influence of Senator Blair of Massachusetts. He served on the USS Guierrer[?] and was a shipmate and personal friend of Admiral Farragut. Mr Mayrant resigned his commission in 1832 and married Miss Frances Horry Guignard at Columbia.

Ensign Perry left the ninth grade at the city schools in the spring of 189? and accepted a position in [unreadable] substitute at the Columbia post office. While engaged at the post office he would frequently work all day as a carrier, then work from 9 pm until the next morning as night clerk, then be on duty for the day as a carrier.

While doing substitute work and contributing towards the support of his mother and sisters, he took lessons and came out first of 11 competitors for the scholarship to the United States Naval Academy. His first two years at the academy were very hard on him and it was all he could do to keep up. He wrote his brother that he was ashamed to be so far from the head of his class and that he was afraid he could not stand the final examinations. The reply to that letter was "stick to it the best you can and we will be as proud of you graduating at the foot of your class as though you were at the head." He passed them all right and in 1900 graduated with honors from the academy.

In January 1903 his engagement to Miss Marie Vipont Doane of Stockbridge, Massachusetts was announced and October 10th of the same year they were married. Since that time Mr Perry has been on the Pacific coast aboard the ill-fated Bennington and his many admirers and friends and relatives were shocked beyond measure when they learned that this bright, promising young man's career was ended.

USS Newman K. Perry (DD 883) was named for Newman; the ship was sponsored by his sister, Laura P. Gunter.

Newman is not included with his classmates in Memorial Hall. This omission was discovered by researcher Kathy Franz.

Raymond is one of 5 members of the Class of 1901 on Virtual Memorial Hall.

The "category" links below lead to lists of related Honorees; use them to explore further the service and sacrifice of the alumni in Memorial Hall.
Retrieved from "http://usnamemorialhall.org/index.php?title=NEWMAN_K._PERRY,_JR.,_ENS,_USN&oldid=131084"
Categories:
Hidden category: