Oskaloosa Smith Schley was admitted to the Naval Academy from Indiana on September 17, 1885 at age 17 years 2 months. 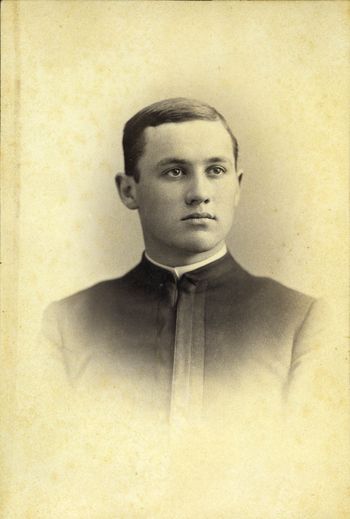 Oskaloosa was lost on August 3, 1886 when he fell from the foretop rigging of USS Constellation while off the coast of Virginia. He was a 3rd class Naval Cadet.

He has a memory marker Indianapolis, Indiana; the marker in part reads "erected by the Class of 1889 U.S. Naval Academy."

Navy’s report: While performing the morning routine of going up the masthead, fell from the foretop rigging, striking various parts of the lee rigging, into the sea and was drowned.

His family lived in Indianapolis - father John, printer, mother Emily Isabella, and sisters Annabelle and Georgealice. His father was a Union captain in the Civil War, was in Grant’s Richmond campaign, and witnessed the surrender at Appomattox. His father’s cousin was Commander Winfield S. Schley who was on the Bear during its rescue of the Greely expedition in 1884 with Freeman Crosby (Class of 1870.) Oskaloosa was named after his mother’s brother Oskaloosa Minnewando Smith. She was a near relative of Edgar Allen Poe and a lineal descendant of Josiah Bartlett, one of the signers of the Declaration of Independence.

FORT MONROE, VA., August 14. - The schoolship Constellation, which anchored three miles below last night, came up to the Roads this morning, and in conversation with some of the cadets I have learned the following additional particulars of the accident: The ship left Portsmouth Monday, August 2d, and on Tuesday morning had a strong breeze, and was running along some thirteen knots an hour. The cadets were sent aloft about 10 o'clock on their usual morning drill, when Cadet O.S. Schley, of Indianapolis, missed his footing and fell from the lee-foretopmast rigging, a distance of one hundred feet, striking on the vessel's rail and falling into the water. Orders were at once given to man the life-boat and bring the ship up in the wind, which was now blowing half a gale. In the meantime the crew of seven men were in the life-boat, which, through the misconception of the orders of the officer of the deck, was prematurely let go, and at once swamped. Four of the crew managed to cling to her sides and hold on until they were rescued, but the other three - Emil Olsen, Petter Larsen, and N. Doland, the coxswain of the boat - were drowned before assistance could reach them. Schley was a bright young man, about eighteen years of age, and a nephew of Commander Schley, of Arctic fame. Their loss has cast a gloom over the entire ship's company.

Oskaloosa is not listed with his classmates in Memorial Hall. This omission was discovered by Kathy Franz.

Oskaloosa is one of 4 members of the Class of 1889 on Virtual Memorial Hall.

The "category" links below lead to lists of related Honorees; use them to explore further the service and sacrifice of the alumni in Memorial Hall.
Retrieved from "http://usnamemorialhall.org/index.php?title=OSKALOOSA_S._SCHLEY,_NAVAL_CADET,_USN&oldid=131102"
Categories:
Hidden category: