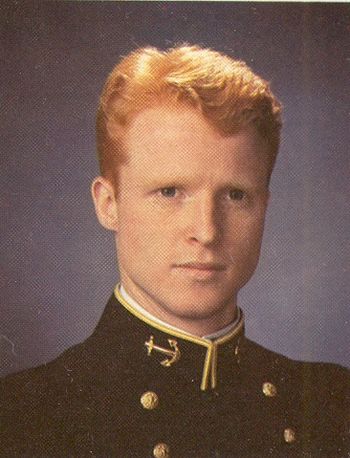 From A-6 Ejection History, Peter listed as lost on November 3, 1992 when the EA-6B he was piloting "crashed in a field near the Naval Air Facility El Centro, Calif." The other two officers aboard were also lost. A news article reported his hometown as Shelburne, Vt.

From the Bennington Banner on November 6, 1992:

A Vermont man was one of three who died earlier this week when a Navy EA-6B Prowler crashed in a field near the Naval Air Facility El Centro.

The airmen killed in Tuesdays crash were from the VAQ-129 Squadron based at Whidbey Island, Wash., and were in southern California for routine training, said Dave Desilets, base public affairs officer.

The cause of the accident was still under investigation, Thomas said.

Twelve of the radar-jamming planes have crashed in the past 10 years a good safety record for a military tactical jet, he said.

The plane crashed about a half mile from the base at about 2 p.m., Desilets said Tuesday. There was an explosion on impact and a fire, but he would not say whether the plane was taking off or landing.

From The Burlington Free Press on November 6, 1992:

Capt. Peter Thomas Limoge, U.S.M.C., 27, a lifelong resident of the town of Shelburne, died unexpectedly Tuesday, Nov. 3, 1992, in El Centro, Calif., as the result of a military aviation accident.

He attended the Shelburne elementary school system and was a graduate of Champlain Valley Union High School, Class of 1983.

Peter graduated from the U.S. Naval Academy ' Prep School in Newport, R.I. in 1984. He then received his engineering B.S. degree from the U.S. Naval Academy in 1988, and upon graduation, he received his commission as second lieutenant, U.S. Marine Corps. He attended various military schools including earning his Airborne Wings at the U.S. Army Infantry School, Fort Benning, Ga., and a full year of Marine Corps officer training in Quantico, Va. Peter successfully completed Navy Marine Corps Flight School in January 1992. He was then assigned to Advanced Flight School in Whidbey Island, Wash., to fly the EA-6B Prowler.

Peter was married in Northampton, Mass., July 11, 1992, to Carol Ann Powers. He was a lifelong active participant in and enjoyed the Vermont environment including skiing, hiking, hunting, biking, and was an avid sailor who achieved national sailing recognition in winning the National Collegiate Sloop Championships in 1987 as a member of the U.S. Naval Academy Sailing Team.

He is survived by his wife, Carol Ann Limoge; his parents, Roland and Jay Limoge of Shelburne; three sisters, Beth, Kristin and Allison Limoge of Shelburne; his maternal grandmother, Mrs. Catherine Marcoux of Fall River, Mass.; his mother-in-law and father-in-law, Therese and George Powers of Northampton, Mass.; and numerous aunts, uncles and cousins. He will be greatly missed by all of his loving family and friends.

A playground at the King Street Youth Center in Burlington, VT was built and dedicated in Peter's memory in 1993.

Peter is one of 8 members of the Class of 1988 on Virtual Memorial Hall.

The "category" links below lead to lists of related Honorees; use them to explore further the service and sacrifice of the alumni in Memorial Hall.
Retrieved from "http://usnamemorialhall.org/index.php?title=PETER_T._LIMOGE,_CAPT,_USMC&oldid=106167"
Categories: