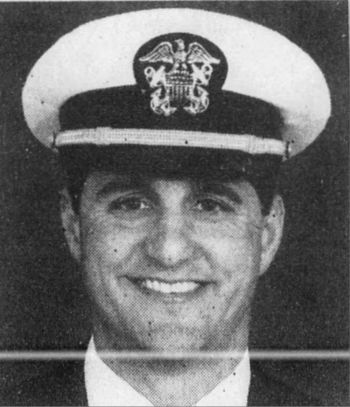 From the Chicago Tribune. Photo located by Kathy Franz.

U.S. Navy Lt. Cmdr. Raymond O'Hare, 33, dazzled friends and family with his accomplishments, but the aspiring astronaut was never satisfied.

He played college football. He held a degree from Harvard University. He flew F-14 jets. He had a wife and three children.

But just a few weeks ago, he told his wife, Colleen, that he thought he hadn't "done anything with my life yet," she said. She took that to mean that Lt. Cmdr. O'Hare, a devout Catholic, felt a spiritual need to help others.

"He was larger than life in so many ways," Colleen O'Hare said of the Chicago-area native and 1984 graduate of Brother Rice High School. "He was the most brilliant man I ever met. He was the most spiritually strong person I ever met. His faith was unbelievable, that's what drove his actions. He always thought of the other person first."

Since his death, so many friends and acquaintances have come forward to tell Colleen O'Hare what her husband meant to them that she now knows her husband touched more lives than even he realized.

Lt. Cmdr. O'Hare had been attending the test pilot school since January and would have graduated with Class 118 in December, Stoney said.

"He had a bright future, was an incredible gent and was an excellent student at test pilot school," said Stoney, who knew Lt. Cmdr. O'Hare through recreational basketball.

The crash, the first at the test pilot school since 1986, also killed the pilot, Lt. Cmdr. Gareth Rietz, 33.

Lt. Cmdr. O'Hare, the youngest of four children, was born in Chicago Heights and raised there and, later, in Palos Heights. He was an A student at Brother Rice, where he played basketball and football. He excelled in football, playing quarterback and defensive back, said his father, Bob O'Hare.

In 1989, he received his bachelor's degree in history from Harvard, where he was also a defensive end and punter on the football team. He met his wife at Harvard, and they were married in January 1992. He joined the Navy in 1990, graduating first in his class from Officers Candidate School, Bob O'Hare said.

From 1992 to 1997, he served as radar intercept officer on F-14s in a variety of fighter squadrons based out of Miramar, Calif.

Lt. Cmdr. O'Hare is also survived by daughters Katherine and Elizabeth; a son, Thomas; his mother, Sally; brothers Michael and Mark; and a sister, Christine Taber.

Bob O’Hare slumps in a living room chair, his tired eyes fixated on the shadowbox full of military medals and the uniformed photo of his son, Navy Lt. Cmdr. Raymond O'Hare.

He shakes his head in disbelief.

“I can't believe Raymond will never come through that door again and that I'll never have a chance to hug my son again. I adored Raymond,” O'Hare said, using words he would repeat frequently during a conversation about his youngest son.

The Navy test pilot was killed July 11 — four days shy of his 34th birthday — when the T-38A Talon training jet he was co-piloting crashed in a wooded area while landing at the Naval Test Pilot School at the Patuxent River Naval Air Station in Maryland.

“I just have a difficult time understanding why,” said O'Hare, himself a retired military man and devout Catholic. “But I can't get mad at God. The author of life can call you home whenever he wants, and I try to be obedient to his will. But everything still seems so surreal.”

Talking about Ray helps the 74year-old Palos Heights man exorcise his sadness, at least publicly, though he admits, there are private moments when confronting the reality of his son's death breaks even his indomitable spirit.

“Ray was an accomplished flier, and was a person who got better in everything he did,” O'Hare said, “He was a great athlete, a great intellect and a great family man. But his focus was always on God.

“All the medals and honors Ray received over the years would not have meant anything had he not been a good person,” he said. “My inner peace comes from knowing Ray was a great person. I adored him.”

A memorial Mass for Ray O'Hare was scheduled for Saturday at St. Alexander Catholic Church in Palos Heights.

Born the youngest of four children to Bob and Sally O'Hare, Raymond, a 1984 graduate of Brother Rice High School in Chicago, followed in the footsteps of his overachieving older brothers, Michael and Mark, both of whom excelled in the classroom and on the athletic field.

Michael, a Harvard University graduate, is an actor living in New York. He had a lead role in the television series “Babylon 5.”

Mark, a graduate of the Naval Academy, served as chief engineering officer aboard the USS Theodore Roosevelt during the Persian Gulf War. A former standout athlete in high school, Mark is an executive with a technology firm in California.

“We've been blessed with four great kids, but Ray was the capstone of the family,” he said.

Ray’s abbreviated life almost ended before it started. O’Hare recalled a visit he and his wife made to the doctor for a checkup while Sally was pregnant with Ray. He said he remembers the doctor’s warning.

“He said Sally's spotting likely would prevent her from carrying the baby to term,” he said. “He wanted to do a procedure that would have terminated the pregnancy. But he respected our religious beliefs enough to not push for the procedure.”

“He was the idol of his family,” O'Hare said. “He was so lovable and so good. His qualities were saintly. Ray was a gift we had for 33 years.”

Raymond received a poster of the cockpit of a DC-10 aircraft when he was 10, his father recalled, which may have stirred his aeronautical acuity.

“Raymond hung that poster on his bedroom ceiling,” O'Hare said. “Maybe that is what subconsciously imbued him with flying.”

He said his son talked passionately, if generally, about being an astronaut.

“He wanted to be an astronaut from the time he was about four or five,” she said. “And I remember him saying he didn’t want to be the pilot of the space ship because then he couldn’t get out and walk on the moon. He dreamed of helping build the (now-under-construction international) space station.”

“This kid was special,” Antos said. “He was a class act. He was bright, respectful and cordial. The kind of kid every teacher wants in his class.”

Unlike brother Mark, Ray didn’t into the Navy by entering the Naval Academy out of high school. Instead, he followed brother Michael to Harvard, where Ray played football. There he met his requirements to earn a degree in history. It was there he also met his wife, Colleen.

After college, he followed his brother Mark's lead and joined the Navy, enrolling in Officers Candidate School. In 1990, Ray graduated first in his class, his dad said.

He served the next several years as a radar intercept officer on F-14 fight: jets in a number of fighter squadrons based out of Miramar, Calif. While in flight school in California, Raymond O'Hare often would take his daughters with him to food kitchens where he helped serve the poor and needy.

“That was an example of Ray’s goodness and kindness and love of his fellow man,” O'Hare said. “But he was a warrior when he flew in his plane. He was always a compassionate man, which contradicts the war airships he flew.”

Raymond was halfway through his one-year test pilot training program in Maryland when the accident occurred.

He was buried with full military honors at Arlington National Cemetery in Virginia and posthumously received the Medal of Valor, awarded for outstanding non-combat meritorious achievement or service.

Stoney said O'Hare and Rietz were testing the latest military aircraft systems, including radar and weapons, when they were killed. Navy Cmdr. Bob Stoney, commanding officer at the test pilot school, said the aircraft crashed a half-mile short of the runway. The aircraft was 30 years old, he said.

“They were two of the best the military has to offer for the extremely important roles of being testers,” he said. “These men were extremely well trained and had logged thousands of hours in flight preparation prior to going up in the air.”

The crash is under investigation.

“His work ethic was just like his mom’s,” he said.

Sally O’Hare retired recently after 35 years as a math teacher, most of those years at Homewood-Flossmoor High School. She said she and Ray were a lot alike.

“We'd do crazy things together, like parasailing and ballooning,” Sally said. “I really thought he would die climbing Mount Everest, which was a dream of his.”

Bob O'Hare said his son had a “burning desire to do well in everything he did.”

“He had an appetite for hard work,” he said. “But it wasn’t the ‘me-ism.’ He helped others. He was an extremely kind person.”

Ironically, Bob and Sally O'Hare were loading their luggage into a limousine for the ride to O'Hare Airport to catch a flight to celebrate their son’s upcoming birthday about the same time Ray’s jet crashed.

They arrived at the airport in Maryland and rented a car for the short trip to their son’s home.

“When we arrived, I saw my daughter-in-law outside and could tell by the ominous look on her face that something was wrong,” O’Hare said, “But I had no idea it was Ray.”

He visited the site where his son’s plane crashed not once but twice because “I wanted to see for myself as much as I could.”

For now, Bob and Sally have more than three decades of photos and memories to help them celebrate Ray’s life.

Bob O’'Hare's most treasured possession is a replica flier’s jacket complete with patches denoting the destinations Ray visited and the naval stations where he trained.

And there is one patch — from the Naval Test Pilot School — that was given to him by a naval commander and stitched strategically on the jacket over his heart.

And it’s in his heart where O'Hare keeps his memories of Ray.

“We talked about all sorts of things,” he said. “Certainly one of the topics we often discussed was the examined life in eternity. As a flier, he had a fatalistic view and knew there was always a critical risk involved in what he did.”

O'Hare said he and Ray talked on the phone the night before the crash.

“There was nothing mysterious or cryptic about our last conversation,” he said. “But there has been one recurring nightmare I have had over the years in which someone is giving me an American flag. “But I keep saying ‘I don’t want it,’” O'Hare said. “I’m wondering why I'm getting the flag since I’m not the widow or the mother.”

He said during the memorial service at Arlington National Cemetery, American flags were presented to Ray’s widow and his mother.

Looking back on the fact that doctors warned that Raymond might die in the womb, O’Hare offered thanks for the 33 years he had with his youngest son.

“If I had a chance to visit with God before our kids were born and find out that I'd only have Ray for 33 years, there’s no question about what my answer would be,” he said.

“I'd rather spend the rest of my days thinking of my kids, and especially Ray, for the incredible gifts they brought than not have them at all.”

Ray's wife and children were profiled in March 2015 piece on The Today Show.

His children were also featured in a piece on Fox News on August 5, 2019.

Raymond is one of 8 members of the Class of 1988 on Virtual Memorial Hall.

The "category" links below lead to lists of related Honorees; use them to explore further the service and sacrifice of the alumni in Memorial Hall.
Retrieved from "http://usnamemorialhall.org/index.php?title=RAYMOND_E._O%27HARE,_LCDR,_USN&oldid=132222"
Categories: