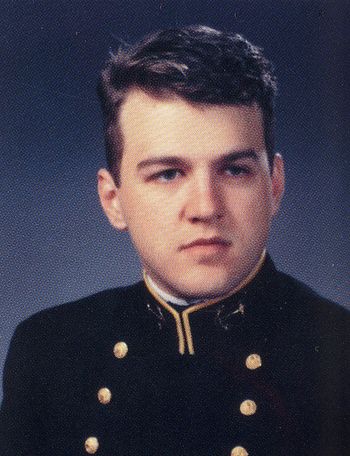 Terrence was lost on February 18, 1996 when the F-14D he was aboard suffered engine failure and crashed ~85 miles from Point Loma during a routine training flight. He was a member of Fighter Squadron (VF) 11.

The deadly crash of an F-14D Tomcat, which killed two Navy aviators, occurred when the Tighter was mimicking a cruise missile attack on a Navy warship, a newspaper reported today.

Sunday's crash occurred during a radar exercise where planes mimic the flight of aircraft or an anti-ship missile flying no lower than 500 feet above the sea and “popping up" near the target ship, sources told the San Diego Union-Tribune.

The flights can be done at subsonic or supersonic speeds. But a Navy spokesman told the Union-Tribune the speed of the plane at the time of the crash is not yet known.

Investigators don’t know whether the plane caught fire before it slammed into the Pacific Ocean or if it exploded on impact, a Navy source told the paper. But officials said the plane disintegrated on impact.

Lamoreaux, who was not assigned to VF-11, was acting as the radar intercept officer of the two-scat fighter.

On Tuesday, the Navy said the crash occurred about 85 miles south-southwest of Point Loma. Earlier reports stated the crash was about 120 miles from San Diego. The original estimate was based on the ships location.

The plane had been launched from the carrier Vinson, which has been preparing for deployment to the Western Pacific and Middle East.

Terry was orphaned at a young age; his mother died of cancer in December 1971, and his father almost exactly a year later in a carrier aircraft accident.

He was survived by his wife, Amanda, sister, Shannon, and grandparents. He is buried in California.

Terence is one of 3 members of the Class of 1990 on Virtual Memorial Hall.

The "category" links below lead to lists of related Honorees; use them to explore further the service and sacrifice of the alumni in Memorial Hall.
Retrieved from "http://usnamemorialhall.org/index.php?title=TERENCE_L._CLARK,_LT,_USN&oldid=106189"
Categories: