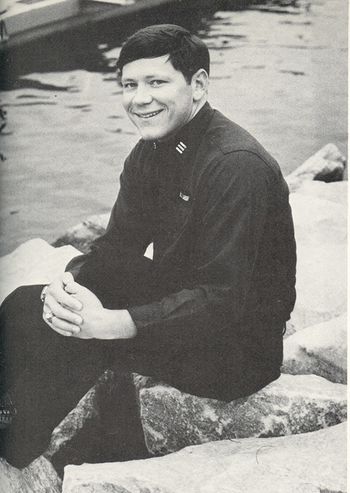 Creation, salvation, contemplation, population, communication, compassion, solution – Brian cared about life. “Do what makes you happy. Do what you know is right. And love with all your might. Before it’s too late.”
– Mike Finder –

Creation, salvation, contemplation, population, communication, compassion, solution – Brian cared about life. “Do what makes you happy. Do what you know is right. And love with all your might. Before it’s too late.”
– Mike Finder –

From Supercarriers of the US Navy - The Complete History

Although the crew enjoyed a mostly clear evening, lookouts reported some haze. The aircraft launched by 1855 but flew separate missions: the Prowler crew investigated a shipping contact during their submarine and surface surveillance coordination plan, and the Intruder flew spar bombing and "basic airwork practice." As the two aircraft completed their runs and returned to the USS Forrestal, they turned into a 30° left bank turn toward the inbound heading and slammed into each other, near 38-40-N, 4-30-E, at 2001.

BUCKEYE 511 rolled three to five times to the left and 611 pitched down and rolled left, at which point the crew ejected. Although searchers rescued the other men they could not recover Lt (JG) Cardiff, and despite an exhaustive search overnight they terminated further efforts and declared the naval aviator "lost at sea" at 17:40 on the 26th. The crew held a memorial service for their fallen shipmate two days later as the ship transited the Strait of Messina.

LTJG Brian Lee Cardiff was born in Columbus, Ohio, on January 2, 1950. He graduated from Linden McKinley High School in June 1968, where he served as Student Council President.

He attended the Naval Academy Preparatory School in Bainbridge, Maryland. Upon completion in May 1969, he entered the United States Naval Academy. He graduated in June 1973, as company commander.

Brian reported to VA-85 as Bombadier/Navigator in the A6E Intruder. On June 25, 1975, he was involved in a mid-air collision with an EA-6B Prowler while preparing to come aboard the USS Forrestal (CVA-59) in the Mediterranean Sea. All five aircrew from the two aircraft were forced to eject. All were recovered safely except Brian.

He loved playing golf. He was a big Ohio State Buckeye football fan.

He is interred in the Naval Academy Cemetery.

Brian is one of 10 members of the Class of 1973 on Virtual Memorial Hall.

The "category" links below lead to lists of related Honorees; use them to explore further the service and sacrifice of the alumni in Memorial Hall.
Retrieved from "http://usnamemorialhall.org/index.php?title=BRIAN_L._CARDIFF,_LTJG,_USN&oldid=134398"
Categories: