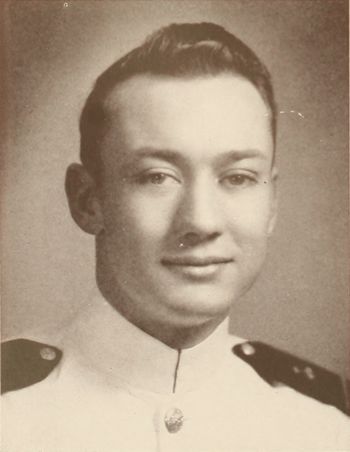 Three and one-half years of white-hat duty before USNA gave "Dan" a head start on his thirty. Movie liberties in old Colonial Annapolis were a disheartening change for this former liberty-loving gob, but he gradually accustomed himself to their monotony, along with the rigid discipline of life at the academy. However, "Beat the system" still remained hidden away among his many thoughts and he seldom dismissed an opportunity. A one-girl man from a one-horse town, he was often found walking backwards muttering something about "staving under a receding hairline."

He was also a member of the 2nd Regimental staff for the fall set.

Three and one-half years of white-hat duty before USNA gave "Dan" a head start on his thirty. Movie liberties in old Colonial Annapolis were a disheartening change for this former liberty-loving gob, but he gradually accustomed himself to their monotony, along with the rigid discipline of life at the academy. However, "Beat the system" still remained hidden away among his many thoughts and he seldom dismissed an opportunity. A one-girl man from a one-horse town, he was often found walking backwards muttering something about "staving under a receding hairline."

He was also a member of the 2nd Regimental staff for the fall set.

Donald was born in Wichita Falls, Texas. He was the son of Lola Bertha and Johnnie Beard. He was known as Dan and used that name routinely. He graduated from Clarendon High School in 1945 and joined the U.S. Navy at age 17 in August, 1945 toward the waning days of World War II. After serving a year as a yeoman, he was released from active duty and remained in the Naval Reserves. He re-entered active duty in 1947 and served two years as a seaman and as an Aviation Electrician's Mate. He was selected to attend the U.S. Naval Academy from the enlisted ranks of the active Navy. He entered the Naval Academy in August 1949 and graduated with the class of 1953. His father died his senior year at the Academy. He married his wife Donna in Amarillo after graduation in 1953.

After commissioning as an ensign, he was assigned to the USS Brown, DD546 and his ship saw action in Korea. He was selected for pilot training and trained at Pensacola, Florida and at Kingsville, Texas. After flight training, he served with a VF squadron. He entered the U.S. Navy Post Graduate School in Monterey, California and graduated with his M.S. degree in 1960. He was then assigned to a Naval Air Wing at Kirtland Air Force Base in Albuquerque, New Mexico from 1960 through 1962. He then assigned the the USS Ranger (CVA-61) and it arrived in the coastal waters of North Vietnam on September 18, 1964. On December 9, 1964, LDR Donald Beard was the pilot of a RVAH-5. The aircraft was a RA-5C, ID #BuNo 149306. There was a bit of confusion on what had actually happened, early evidence pointed to the fact that the aircraft crashed as it approached the USS Ranger, but new evidence shows that aircraft crashed on land and not into the the sea. The remains of both aviators on board were recovered.

LCDR Beard was killed flying an A3J Vigilante, the highest and fastest flying of all Navy heavy attack models, and demonstrably all operational aircraft, capable of flight at over Mach 2 at sea level and climbing to over 91,000 feet with a 1000 Kg (2200 lb.) load. The aircraft was originally the A3J, an attack model; the A3J was subsequently modified specifically for reconnaissance, both photo and electronic, and redesignated the RA-5C. The RA-5C had the highest casualty rate of all aircraft types during the Viet Nam war because of its employment for bomb damage assessment photos after a strike had alerted the defenses that a BDA mission would follow, with no flak suppression preparation, and they were prepared for its arrival.

LDCR Beard was buried with full military honors at sea. His family placed a memorial headstone in the Citizen's Cemetery, Clarendon, Donley County, Texas. This headstone is in the family plot with his parents. He was survived by his wife, Donna D. Beard and his two sons of Sanford, Florida and his mother was living in Odessa at the time. His mother passed away in 1989 and is buried at the Donley County Cemetery, next to her husband and the memorial headstone of LCDR Donald Beard.

From the March 1965 issue of Shipmate:

LCdr. Donald W. Beard, USN, died as the result of an aircraft accident on 9 Dec. He was initially reported missing on the tenth when his aircraft failed to return. The resulting search located the wreckage and his death was confirmed. At the time of the accident, he was attached to VAH-5 onboard USS RANGER. Services were held at the Navy Chapel, N A S, Sanford, Fla. on 5 Feb.

Don was born on 11 May 1928 in Wichita Falls, Tex. He joined the Navy in August of 1945 and attended NAPS briefly before being admitted to the Naval Academy. Following graduation in June of 1953, he served as navigator in USS BROWN and entered flight training in February of 1954. He was designated an aviator on 1 April 1955 and served with VF-114. He attended Postgraduate School and completed the two-year aeronautical engineering course in June of 1960. He then served as Technical Liaison Officer at Naval Weapons Evaluation Facility in Albuquerque, N. M. In January of 1962 he was transferred to VAH-3 and in September was transferred to VAH-5 with which he served until his accident.

Don is survived by his widow. Donna Jones Beard; two children, Daniel Woodrow and David William; and his mother, Mrs. Lola B. Beard of Clarendon, Tex. The family plans to locate in the San Diego, Calif, area in the near future.

This site says Don's aircraft "suffered a navigational error and crashed into the Gulf of Tonkin off USS Ranger." This occurred on December 9, 1964.

Don is among those names on the Vietnam Veterans Memorial in Washington, D.C. As his loss was not due directly to hostile action, though, he does not appear in the Vietnam War section of the Killed In Action panel in Memorial Hall.

Donald is one of 62 members of the Class of 1953 on Virtual Memorial Hall.

Retrieved from "http://usnamemorialhall.org/index.php?title=DONALD_W._BEARD,_LCDR,_USN&oldid=131900"
Categories:
This page was last modified at 23:38 on 4 October 2020.
About USNA Virtual Memorial Hall