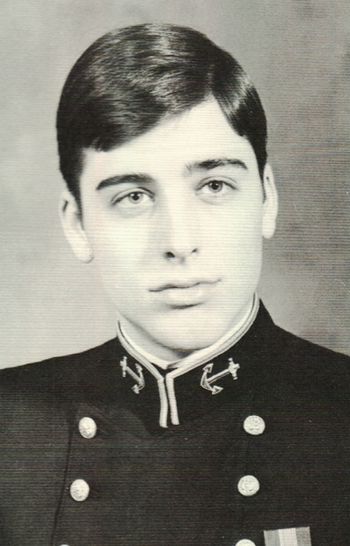 Before coming to the Naval Academy Gene lived in a picturesque little town nestled in a corner of New York City, called Brooklyn. Once here he found that the military aspects were not the only difficult area, academics also took their toll. He soon chose American Political Systems as his major and in so doing made sure that study time never interfered with his rack time. After school hours Gene could be found rowing on the Severn with the lightweight crew team or playing company intramurals. Upon graduating he will be commissioned into the United States Marine Corps.

Before coming to the Naval Academy Gene lived in a picturesque little town nestled in a corner of New York City, called Brooklyn. Once here he found that the military aspects were not the only difficult area, academics also took their toll. He soon chose American Political Systems as his major and in so doing made sure that study time never interfered with his rack time. After school hours Gene could be found rowing on the Severn with the lightweight crew team or playing company intramurals. Upon graduating he will be commissioned into the United States Marine Corps.

Maj. Eugene Thomas McCarthy, a Marine Corps reservist and Drug Enforcement Administration agent who was killed in action in the Persian Gulf War, was remembered Friday as a gung-ho warrior who thought he could serve his country best by "being where the war was."

McCarthy, a helicopter pilot, died Feb. 1, when his Cobra gunship crashed while he was flying a mission in support of ground troops in Saudi Arabia. A memorial service attended largely by DEA agents and Marines was held for McCarthy, 35, at St. Patrick's Catholic Church in Carlsbad, where he was a parishioner.

DEA Agent Doug Hebert, who shared a home with McCarthy, said that his friend "wanted to be where the war was," whether it was fighting Iraqi aggressors in the Persian Gulf or drug traffickers in the jungles of South America. McCarthy, who was an active duty Marine for 11 years before joining the DEA in September, 1988, got to do both.

"Before war broke out in the Persian Gulf, Gene never had a chance to fight in a war as a Marine," said Hebert. "That's why he joined DEA. That's where the war was, fighting drugs in South America. That's where he went to fight his first war."

DEA Agent Joe Moody, who was McCarthy's boss, gave an emotional eulogy, in which he described him as a warrior who often marched to his own drummer.

"I was proud and privileged to have been touched by his free spirit… Gene was a warrior who lived his life as he chose," said Moody.

Without exception, everyone who knew McCarthy described him as highly motivated and gung-ho, but caring. In his remarks, Moody read from a letter that McCarthy wrote to a friend while serving in Operation Snowcap, the DEA code name for an anti-drug operation conducted with police and military officials in Peru, Colombia and Bolivia.

McCarthy, who was single, volunteered to remain in South America during Christmas, 1989, and the following New Year so married agents could spend the holidays in the United States with their families.

"I volunteered (to stay) because I know that a lot of these guys are dying to be home," McCarthy wrote. "…I've been away so long from home at Christmas that one more won't make a difference."

After going through refresher training with the Cobra gunship, McCarthy was sent to Saudi Arabia with a Marine unit Jan. 6, less than two months after returning from his overseas duty with DEA.

St. Patrick's pastor Msgr. J. Raymont Moore praised McCarthy as a man who constantly put his life in harm's way for the sake of others. Recalling McCarthy's dangerous assignment as a drug agent in South America, Moore said he "risked his life so that others may be safe from the evils of drugs."

"Obviously, Gene made a decision to serve society… He was a man in the fullest sense of the word," said the monsignor.

Earlier, the priest singled out a passage from the gospel to describe McCarthy's life.

"The greatest love a man can have for his friends is to give his life for them," he said.

During the memorial service, a Marine color guard stood at parade rest to the right of the altar. The service included a mournful dirge of religious and Irish songs, including Danny Boy and Amazing Grace, which were sung a cappella. Both songs left some mourners struggling to keep a dry eye.

After the service, a Marine honor guard fired a 21-gun salute in front of the church. This was followed by the distant sound of taps, played by a Marine bugler. Jim Taylor, a Marine rifleman and Vietnam veteran, closed the ceremony by playing the Marine Corps Hymn on bagpipes.

From the November 1991 issue of Shipmate:

Born 10 May 1955 and a lifelong native of New York he was appointed to the Naval Academy from that State. After majoring in American Political Systems he graduated with the Class of 1977. While at the Academy he was a member of the lightweight crew team.

Upon graduation he was commissioned a Second Lieutenant in the Marine Corps and reported to Quantico. After graduation from The Basic School he reported to flight training and was designated a Naval Aviator. His first tour of duty was with HMA-369 at Camp Pendleton, Calif.

During the next eleven years he served with a number of commands including ANGLICO and VX-5, and made several deployments to WestPac. During his tour with ANGLICO he completed parachute training and Ranger School. In July of 1988 he joined the Drug Enforcement Administration and graduated first in his DEA class from the FBI Academy.

While serving as a special agent with the DEA he participated in Operation Snowcap, a special drag enforcement operation in Peru. With the growing crisis in the Persian Gulf, he volunteered to return to active duty.

Following a brief training period he reported to his AH-1 unit in Saudi Arabia at the start of the year.

Memorial contributions may be made to the USNA Class of 1977 Memorial Fund in care of the U.S. Naval Academy Alumni Association.

From the archives of the New York City Mayor's Office, originally released October 16, 1996:

"Major Eugene McCarthy represents the courage and gallantry that makes our nation the greatest in the world," Mayor Giuliani said. "We must never forget that everything we have and everything we are, we owe to the courageous men and women who won and defended our freedom and liberty. Today, we honor Eugene's courage and sacrifice, and the sacrifice of all New Yorkers who fell in the Persian Gulf by dedicating this monument in Major McCarthy Triangle. For generations to come, this monument will remind the City and the nation of our gratitude to Major Eugene T. McCarthy."

Born and raised in Brooklyn, Eugene T. McCarthy attended the United States Naval Academy at Annapolis and after graduation became a Marine Aviator. After serving in the Marines, McCarthy joined the United States Drug Enforcement Administration where he aided our nation's efforts to locate and destroy South American drug crops. As tensions in the Persian Gulf grew, McCarthy and his Marine Corps reserve unit went into battle. In February 1991, McCarthy and his co-pilot were killed when their helicopter crashed during a rescue mission. Marine Major McCarthy is survived by his parents, Kathryn and Eugene, his sister, Ann and his brother, Dennis.

The monument, the first Gulf War memorial in the City of New York, is a rainbow granite obelisk split in two pieces, on top of a field of black granite. W.C. Maffei, the project's architect, designed the memorial to symbolize lives cut short on the battlefield.

For the past three years, the Fraser Civic Association and other area residents have sponsored a variety of events to raise funds for the monument. The community's efforts attracted the attention of the Army Corps of Engineers, Con Edison, McCarthy Pole and Bracci Fence who helped to construct the monument.

Eugene is one of 16 members of the Class of 1977 on Virtual Memorial Hall.

The "category" links below lead to lists of related Honorees; use them to explore further the service and sacrifice of the alumni in Memorial Hall.
Retrieved from "http://usnamemorialhall.org/index.php?title=EUGENE_T._MCCARTHY,_JR.,_MAJ,_USMCR&oldid=133480"
Categories:
Hidden category: