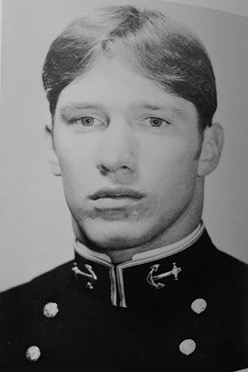 James E. Boyle, 39, a lieutenant commander in the Navy, was a decorated pilot and flew missions in the Gulf War.

A resident of Norwood Park, he died Dec. 17 in a crash while on a training mission near Twin Falls, Idaho.

Lt. Cmdr. Boyle, who was born in Chicago, was president of the Lane Tech High School Class of 1971 and graduated from the U.S. Naval Academy in Annapolis, where he played varsity football.

He flew in the Chicago Air and Water Show several years ago.

Lt. Cmdr. Boyle took his flight training at Whiting Field, Fla., and at Meridian, Miss., getting his wings in 1979.

He served aboard the USS Kitty Hawk, the USS Ranger, the USS Enterprise and the USS Midway. He flew off the latter during the Gulf War. He flew 15 strike and eight direct-combat-support missions, accumulated 71 combat flight hours and was decorated three times for heroic and meritorious achievement in combat.

Among the medals he received were the Air Medal with the bronze numeral "2" and the Navy Commendation Medal.

Survivors include a daughter, Erika; and a stepson, Samuel; his parents, Jack and Valerie; two brothers; and a sister.

He is buried in Illinois. 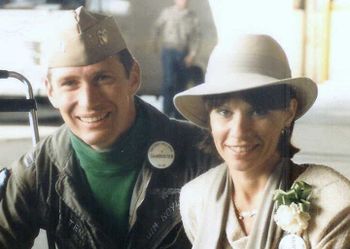 James and his wife, via Heroes of the United States Naval Academy.

On December 17, 1991, LCDR Boyle a gifted pilot, loss his life in a training accident while assigned to the Fighter Squadron 126 (VF-126). VF-126 was the Pacific Fleet Adversary Fighter Squadron for the "Top Gun" program. James Earle Boyle was born on April 17, 1953 in Chicago, Illinois to Mr. Jack E. and Mrs. Valerie A. (Karlsen) Boyle. In 1971, he graduated from Lane Technical High School where he was the class president. He captained Lane Tech's 1970 city championship football team and received a Mayor Daley Youth Foundation Scholarship. He also participated in a number of Chicago Park District athletic programs in the Norwood Park area. He was nominated to the United States Naval Academy from Illinois and entered in June 1973. Midshipman Boyle was a member of the Navy football team. He was nicknamed "Jimbo." Midshipman Boyle graduated 956 of 969 Midshipmen on June 8, 1977. However, Midshipman Boyle’s commissioning date was July 20, 1977.

On December 27, 1981, Lieutenant Boyle married Mrs. Jana Marie (Egge) Boyle of Paris Kentucky. Together they had one daughter Erika.

During an instrument training mission, LCDR Boyle was killed in the line of duty on December 17, 1992 when his F-16N Falcon crashed near Twin Falls, Idaho. At the time of this death LCDR Boyle was assigned to Fighter Squadron 126 (VF-126) which was the Pacific Fleet Adversary Fighter Squadron for the Top Gun program. Radar contact with his jet from Miramar Naval Air Station, was lost. Wreckage was found in a field about 7.5 miles southwest of the Twin Falls-Sun Valley Regional Airport, where the jet had taken off. His body was found in the wreckage.

James is one of 16 members of the Class of 1977 on Virtual Memorial Hall.

The "category" links below lead to lists of related Honorees; use them to explore further the service and sacrifice of the alumni in Memorial Hall.
Retrieved from "http://usnamemorialhall.org/index.php?title=JAMES_E._BOYLE,_LCDR,_USN&oldid=119359"
Categories: