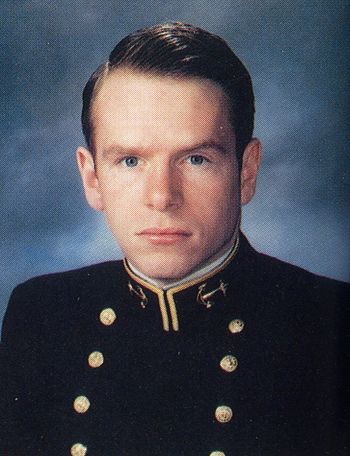 After fixing toilets in Orlando, FW decided to give the Academy a try. Napster beating and sub painting. Youngster year brought systems classes, and away went the stars: or maybe it was: MS, TT, JM, SS, TM, DD. Reading sports pages in Kalme’s class, He was unsat all second class year, just like ES (but still managed taking lots of WE’s). DD in Thermo with GH (bagels, ma’am). DD in EE reading DG’s mail from SL with CDR Mumbles (oops, he’s not deaf!!!!). Knowles flame sessions (I love this guy!!; he reminds me of MGMcCoy). RSK cooperating in Bechert's class. Ring Dance with TM (why?!?!). Mini-BUDS (are you CRAZY?!) Where is that M-14 anyway? Weekends at the Mossers. Breaking promises to Dave (No, I swear this time). Out of company. Meeting girls while fencing (I do it for the competition), I love you, man. See you at SWOS!!! DMD

After fixing toilets in Orlando, FW decided to give the Academy a try. Napster beating and sub painting. Youngster year brought systems classes, and away went the stars: or maybe it was: MS, TT, JM, SS, TM, DD. Reading sports pages in Kalme’s class, He was unsat all second class year, just like ES (but still managed taking lots of WE’s). DD in Thermo with GH (bagels, ma’am). DD in EE reading DG’s mail from SL with CDR Mumbles (oops, he’s not deaf!!!!). Knowles flame sessions (I love this guy!!; he reminds me of MGMcCoy). RSK cooperating in Bechert's class. Ring Dance with TM (why?!?!). Mini-BUDS (are you CRAZY?!) Where is that M-14 anyway? Weekends at the Mossers. Breaking promises to Dave (No, I swear this time). Out of company. Meeting girls while fencing (I do it for the competition), I love you, man. See you at SWOS!!! DMD

Lt. Cmdr. Frank Carl Wittwer was far more than a highly decorated strike-fighter pilot at the Naval Air Station Lemoore before he met his death in a training mission almost two weeks ago, friends say.

Lt. Cmdr. Wittwer, remembered by about 600 people at a private memorial at the naval base chapel Monday afternoon, was a devoted husband and father of three children who could brighten his friends' day with a quick smile.

He was a fly fisherman who loved teaching Sunday school and singing in the choir that his wife, Melinda, directs at the First Presbyterian Church of Hanford.

Lt. Cmdr. Wittwer, 35, was remembered as a man of many talents who laughed often. He enjoyed jogging, riding his bicycle, skeet shooting and playing the trumpet. He was an expert fencer, just barely missing out on the Olympics in 1994, said close friend Robert Case.

However, Lt. Cmdr. Wittwer likely will be recalled by most as a loyal and compassionate friend who was there to lend a hand whenever it was needed.

"He was always concerned about other people's problems and wanted to do what he could to help," said Case, 75. "Frank was a different kind of person ... Forever positive, ever bright, one of the smartest people I know. Everybody he touched he brightened their life, including mine. I looked on him as a grandson."

Case attended Monday's gathering and also was one of about 400 people who turned out for a memorial service last week at the First Presbyterian Church of Hanford. Lt. Cmdr. Wittwer, who grew up in DeRidder, La. will be buried in his home state on Friday, said Dennis McGrath, public affairs officer for the naval base.

"I have never seen the chapel this packed," McGrath said of Monday's memorial. "People were standing in the back and halfway up the aisles. He had a lot of friends. I saw many people wiping their eyes."

The service included a 21-gun salute and a four-plane missing man formation that flew over the chapel.

Stammer, who said he was devastated when he learned of Lt. Cmdr. Wittwer's death, flew in from Washington to attend the service. "He was phenomenal. He was one of those guys who had every quality that you would want."

The pilot was killed when his single-seat F/A-18C Hornet crashed during a routine training exercise near Naval Air Station El Centro on Jan. 18. As a member of Strike Fighter Squadron 97, Lt. Cmdr. Wittwer and the rest of the squad had been training at the Marine Corps Air Station Miramar in San Diego since Jan. 8 and using airspace near the El Centro base, McGrath said. Foggy weather prevented the squadrons from training near the Lemoore base.

The fighter pilots were practicing a bombing mission when the crash occurred. Nonexplosive cast-iron balls weighing about 25 pounds serve as mock bombs on the Hornets, McGrath said.

McGrath said Lt. Cmdr. Wittwer enlisted in the Navy after high school and had lived in Hanford since 1998. The quick-witted pilot graduated from the U.S. Naval Academy, Annapolis, Md., in May 1994. During his stay in Lemoore, he served on three strike fighter squadrons and had more than 1,200 flight hours, McGrath said.

The lieutenant commander flew missions in Operation Iraqi Freedom in 2002-03. In April 2005, he was assigned to Strike Fighter Squadron 97, where he served as the maintenance officer, McGrath said. He recently completed the Executive MBA program in the Craig School of Business at California State University, Fresno, and was a member of the university's alumni association, according to the school's Web site.

Following the base memorial, mourners gathered to remember Lt. Cmdr. Wittwer as a friend and role model.

Navy gunner Jim Richardson, 43, drove in from Fallon, Nev., to say goodbye to his former squad mate. Richardson met him in March 2002 and remembers him as a leader, a friendly man who always had a wallet full of pictures of his family and who loved his bird dog Gracie.

"He was very much a family man," Richardson said. "Our squadron at a particular time was very close both in our professional and personal relationships."

"I lived for 75 years and I'm at a loss for words. I wonder why Frank and not me?" Case asked. "If grown men don't cry, I'm just a kid at 75. ... I look forward to a long visit with him not too many years from now, with a sound hope that I'll be going to the same place as he is."

1988 graduated from Math, Science & Arts High School, Natchitoches, Louisiana. Pre-Law Club. Young Investors Club. Happiness is not circumstantial . . . -Hick third grade school teacher It’s all relative; so it just doesn’t matter . . . -Grady Ballanger Cough!!! Plans were to attend LSU (BR). When Frank donated blood, he said it was an excuse for someone to hold his hand.

Frank was nominated to the Naval Academy by U.S. Rep. Jim McCrery.

In April 2007, Frank’s name was added to the Kings County Freedom Memorial.

Reflecting on the past seven months, Wittwer said he will never forget the first time he flew over Baghdad at night as the Iraqis shot anti-aircraft artillery at his fighter jet.

“I just thought, ‘Wow, this is the real deal. Someone is trying to shoot me down,’” he said.

Wittwer said he was proud to be a part of Operation Iraqi Freedom.

Wittwer said he knows he’s missed milestones in his 2- and 3-year-old daughters’ lives. Once he’s home, Wittwer said he will take his girls to Sea World, Disneyland and the Chaffee Zoo in Fresno (a weekly ritual for Wittwer and his daughter).

He’s also anxious to sign them up for swimming lessons.

Every year, the Warhawks of Strike Fighter Squadron Nine Seven (VFA-97) remember their fallen comrade by recognizing the Junior Officer and Senior Enlisted Sailor who most embody the same qualities of leadership, compassion, enthusiasm and spirit that made Wittwer an outstanding Naval aviator and officer.

From Children of Fallen Patriots Foundation:

Abigail Wittwer is the daughter of U.S. Navy Lieutenant Commander Frank Wittwer. “He was a great fighter pilot, but, more importantly, he was a great dad.” Lt. Commander lost his life in 2006 when Abigail was just 6 years old. “Even growing up without my father, his legacy has shaped me into the person I am today, and I am so grateful for the small amount of time I had with him.”

As a Children of Fallen Patriots Foundation (Fallen Patriots) scholarship recipient, Abigail is studying Finance at University of North Georgia. She was inspired to choose finance because she loves mathematics and economics. Her goal is to work for a nonprofit that assists military families who have lost a loved one in the line of duty.

“Fallen Patriots has helped me pay for school through various scholarships and I am so thankful. Not having to worry about how I would pay for things like books and housing has taken such a huge weight off my shoulders.”

Abigail is a member of the Alpha Gamma Delta sorority and credits the organization for giving her lifelong friends as well as helping her get involved in the community. She encourages other Gold Star students to connect with one another to receive a place of belonging.

There are approximately 20,000 children who have lost an active duty parent in the military over the last 35 years. The vision of Children of Fallen Patriots Foundation is to ensure that every such child receives all necessary college funding.

Frank is one of 7 members of the Class of 1994 on Virtual Memorial Hall.

The "category" links below lead to lists of related Honorees; use them to explore further the service and sacrifice of the alumni in Memorial Hall.
Retrieved from "http://usnamemorialhall.org/index.php?title=FRANK_C._WITTWER,_LCDR,_USN&oldid=136401"
Categories: