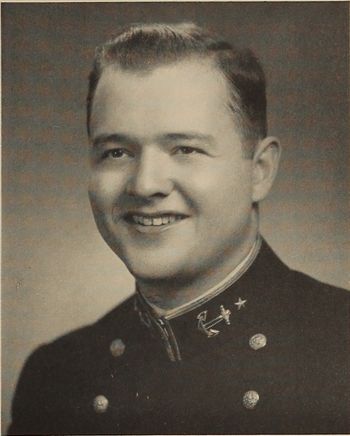 Big Tom — all 6' 0" and 195 pounds of him — hails from Nashville, Tennessee, where he graduated from Montgomery Bell Academy and attended Vanderbilt University for one year. At Vandy he was a member of the Sigma Alpha Epsilon fraternity before he transferred his pursuit of higher education to Navy Tech. Here, Tommy experienced no difficulty with his studies. Physics and Math helped to keep him in the starring bracket. Frequent workouts were a rule with Tom. Mac dragged frequently and his stable of phillies was varied and vivacious. If his future success depends upon energy, Tom is certain to excel.

Big Tom — all 6' 0" and 195 pounds of him — hails from Nashville, Tennessee, where he graduated from Montgomery Bell Academy and attended Vanderbilt University for one year. At Vandy he was a member of the Sigma Alpha Epsilon fraternity before he transferred his pursuit of higher education to Navy Tech. Here, Tommy experienced no difficulty with his studies. Physics and Math helped to keep him in the starring bracket. Frequent workouts were a rule with Tom. Mac dragged frequently and his stable of phillies was varied and vivacious. If his future success depends upon energy, Tom is certain to excel. 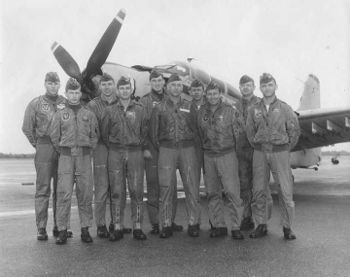 An A-1E went down on February 24 with two USAF crew aboard. They crashed on a rubber plantation about 15 miles south of the base. The rescue effort got to be, as Archie put it, “(a game of) musical chairs with three helicopters between Bien Hoa, Tan Son Nhut and the crash site.”

Here’s how it went down.

Capt. Warden and Lt Connell for Det 4 were on secondary alert and got aloft in HH-43 #712. Capts. Boyles and Spaur launched with the FSK in #711. Capt. LeFevre and Archie assumed LBR alert in #716 and were scrambled on another aircraft incident just minutes later.

Nr. 712 lowered two men by hoist to cut a landing pad for #711 and the FSK. Capt. Warden recovered one body and two wing guns and returned to Bien Hoa for fuel. As he approached the base, LeFevre and Archie departed in #716 to help Capt. Boyles in #711. But when they got there, Boyles had to return for fuel. So #716 circled to land, but in swooped a VNAF H-34 from Tan Son Nhut and he took #716’s landing pad. An H-34 was brought in by USAF Capt. Fetzner and an EOD team. They picked up two more guns and left. They received one hit from hostile fire on departure. LeFevre and Archie on #716 landed with a chain saw. Then Capt. Boyles returned with #711 and helped search for the second body. In the mean time, Warden flying #712 with an A-1E body was ordered to got to Tan Son Nhut. Armed UH-1s arrived to provide cover as a group of Lambettas (motor scooters) were seen coming down the road. They also spotted a couple ox carts approaching, often used to transport mortars and shells.

I believe the two lost in the A-1E were Capts. Thomas C. McEwen and Kurt W. Gareiss (shown here), USAF. If correct, Gareiss was an instructor pilot and McEwan was on an evaluation and training flight. The aircraft entered a spin at about 3,000 ft. while executing an acrobatic maneuver and struck the ground in a flat attitude and exploded about 15 miles from Bien Hoa. They were flying with the 1st Air Commando Squadron of the 34th Tactical Group. Nr. 716 left and I am not sure whether they found the second pilot. Both are listed on the Vietnam War Memorial.

I knew Tom when I got in the Air Commandos in late 61. I liked him as a friend and talked to him often. What I remembered of him was he was a USNA grad, a karate expert and an all around good guy. Gene Rossel

From Air Force Magazine in August, 1962:

Men of the 1st Air Commando Group have already seen service on three continents, though the Group has been in existence barely more than a year. Since November they have flown as instructors in the same cockpits with South Vietnamese airmen opposing Viet Cong guerrillas. The detachment there is currently commanded by Lt. Col. Gene Mueller. Last September, a detachment under Capt. Thomas C. McEwen, Jr., flew two C-47s from Eglin to the Republic of Mali (formerly French West Africa), via Newfoundland and the Azores, to join with Army experts in training Mali paratroopers. A third detachment, led by Lt. Col. Bob Gleason, is now in Panama preparing to teach Air Com­mando tactics to Latin Americans.

To those accustomed to thinking of the Air Force in big numbers—in planes, men, and money—the Air Com­mandos are a distinct change. Captain McEwen's Mali task group, for example, numbered only seventeen men. There are some 140 Air Commandos in South Vietnam, flying fewer planes than you'll find in a normal fighter squadron. The Latin American contingent departed with sixty men and ten planes, but is expected to grow to 600 men and forty planes in the next year.

Captain McEwen, who led the Mali detachment, went into Air Force pilot training after graduating from the Naval Academy in 1952. While flying RB-47 missions from Japan, he practiced judo with such con­centration and skill that he was awarded an expert's black belt in less than two years.

In Mali, which recently gained independence from France, McEwen and his men regarded themselves as unofficial ambassadors for America and democracy, and mixed with the local population at every opportunity. The detachment played volleyball and basketball with Malians. McEwen joined the judo club in Bamako, Mali's capital, and found himself its ranking expert. Although he had no previous jump training, he made two jumps with his Mali students.

Now back at Hurlburt, McEwen spends an hour be­fore each work day teaching judo to other Air Com­mandos. He will go to Fort Benning for jump training in August, and on to South Vietnam early this fall.

SSgt. Richard N. Darco, 30, is an intelligence spe­cialist in Air Commando Group headquarters. A de­scendent of Chippewa Indians, Darco quit high school after two years and worked in a variety of jobs, includ­ing longshoreman, welder, and cabinetmaker. When he trimmed off the ends of two fingers in a power-saw mishap, he decided to join the Air Force. Now in his third enlistment, Darco was a photo lab technician in a tactical reconnaissance squadron in Japan when he applied for Air Commando training. Meanwhile, he applied himself in off-duty classes to gain a diploma and now is working toward a degree through USAFI and on-base courses. In his spare time he helps run the Group's recreational program. Like Captain McEwen, he is preparing for jump school.

Thomas is among those names on the Vietnam Veterans Memorial in Washington, D.C. As his loss was not due directly to hostile action, though, he does not appear in the Vietnam War section of the Killed In Action panel in Memorial Hall. (He is incorrectly listed as KIA in the Class of 1952 book.

Kurt Gareiss '57 was the other pilot aboard.

Thomas is one of 50 members of the Class of 1952 on Virtual Memorial Hall.

The "category" links below lead to lists of related Honorees; use them to explore further the service and sacrifice of the alumni in Memorial Hall.
Retrieved from "http://usnamemorialhall.org/index.php?title=THOMAS_C._MCEWEN,_JR.,_CAPT,_USAF&oldid=131879"
Categories: