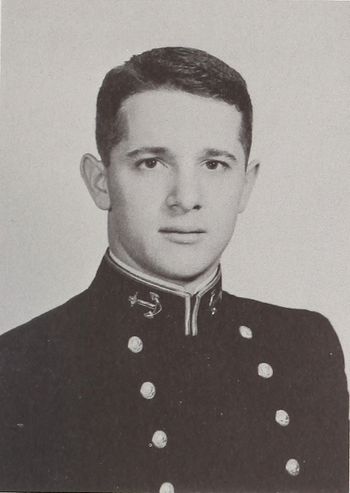 At the beginning of May the Battalion was participating in Operation PURPLE MARTIN in northern Quang Tri Province. On May 2, during the movement of Company F troops a mid-air collision occurred between a CH-46D from HMM-262 and a UH-1H, with the CH 46D crashing west of FSB Russell in the vicinity of Dong Tien Mountain and the damaged UH-1H managing to land. There were no survivors in the CH-46D; twelve passengers and crew died.

From the September-October 1969 issue of Shipmate:

1/Lt. Gary E. Holtzclaw, USMC, died on 2 May in Quang Tri Province, Vietnam, as the result of a mid-air helicopter collision. Services were held in the First Christian Church of Corbin, Kentucky, followed by graveside services in the Cumberland Memorial Gardens of Lily, with military honors.

Born in Corbin, 1/Lt. Holtzclaw was a member of various activities and clubs at Corbin High School and attended Western Kentucky University. He was a member of the Ninth Company at the Naval Academy and was graduated from the Academy in June 1967. Commissioned into the Marine Corps. 1/Lt. Holtzclaw completed Basic Training at Quantico and in November 1968 arrived in Vietnam where he was attached to Company F, Second Battalion, Fourth Marines, Third Marine Division (REIN), Fleet Marine Force.

More details on the collision are here.

He was a tough little guy; only about 5'6" or so, 120 pounds, born with the Eagle, Globe and Anchor in his soul. A native of Corbin, Kentucky, Gary “Rocky” Holtzclaw was a Marine from Day One. Tenacious and determined, it took him two years to win a Congressional appointment to the Naval Academy. Finally, in June of 1963, Gary took his place with the Class of 1967 in pursuit of his lifelong dream.

Gary worked really hard to keep himself fit and staying in shape for boxing was just one aspect of his drive and perseverance. He also studied hard and was consistently named to the Dean’s and Superintendent’s Lists. His favorite recreational reading was the History of the Marine Corps; a book about three inches thick. With his drive to succeed, Gary became a role model for his roommates. Doug Murrell said that after rooming with Gary for two years, he actually broke a 3.2 one semester, largely due to Gary’s example.

Gary played by the rules, but he willing to stretch them on occasion. One evening, Gary and Doug were in my room, when I was Company Commander, along with my roomies Ken Norton and John Richman. We were all sitting around, shooting the breeze, sipping a little scotch and practicing sticking pencils, coins and socks to the acoustic tiles in the ceiling. The Officer of the Watch suddenly burst into the room, raising hell, because some Youngsters had radios on after Taps. The entire room snapped to attention while I took several minutes of abuse and direction from the OOW. After the chewing out, the OOW stormed out, never noticing either the glasses of scotch or all the stuff hanging from the ceiling!

On another occasion, Gary, Doug and some others took Norm Hapke to East Baltimore Street to enjoy some of the area’s baser pleasures; among them, The Gaiety Burlesque and the Two O’Clock Club home to the famous stripper Blaze Starr. Arriving back at Bancroft Hall well past the curfew, Norm, to demonstrate his solidarity volunteered to sneak into the 5th Wing basement window, on which the lock was broken, to open the door for the rest of the group. Norm was boosted up to the window and as he bounced in, he landed on the OOW who was making his rounds. It’s long been forgotten how many demerits Norm got for his effort, but the rest of the group greatly enjoyed the evening!

Gary approached athletics with the same diligence and dedication as his academics. He boxed in the 115 pound class in both the Battalion and Brigade Boxing programs and could duke it out with the best of them. But, like all of us, he had his weaknesses. He lost his match in the Brigade Quarter-Finals, because there was a good-looking young woman in a red mini skirt sitting about five rows up in the stands right at Gary’s eye level. You can see where this is going... needless to say, he was distracted and the other guy, who was apparently taller, took the advantage and won the bout.

Shortly after graduation, in his hometown of Corbin, Gary married his high school sweetheart, Patricia Gregory. Doug Murrell and Leroy Farr attended the wedding and remember it as the happiest day of Gary’s life. The boy from Kentucky finally had all he ever wanted his Corps and his girl. The newlyweds headed to Quantico, Virginia where Gary attended The Basic School before deploying to the Mediterranean. Following that tour of duty, he next attended Force Recon School in preparation for deployment to Vietnam. In November of 1968, Gary arrived in Vietnam where he was attached to Company F, Second Battalion, Fourth Marines, Third Marine Division, Fleet Marine Force.

On May 2, 1969 after being “On the Line” for over a month, Gary, a Company Commander, and his Marines were being relieved and rotated to the rear for some much needed rest. Due to the high tempo of combat operations, the Army and the Marine Corps both had helicopter troop carriers and gunships operating in the same area. As the Marine Corps transport with Gary and the other Marines aboard cleared the tree tops, its rotor blades collided with those of an Army Huey. The Marine Corps CH-46 unable to regain control, crashed into the ground. There were no survivors.

Gary and Patricia had been married less than two years and he had been deployed to the Med and Vietnam for almost half of that time. His mother refused to speak of the medal that the Marine Corps posthumously awarded to Gary; she said that it was no substitute for her son. At the Holtzclaw family’s request, Doug Murrell escorted Gary’s remains home to Corbin, where he was laid to rest with full military honors. Once again, the tiny Appalachian mining town having lost far too many of its sons in their country’s service, mournfully added a favorite son’s name to the hundreds already on its war memorial. In a little over two years, those who knew Gary and loved him went from the height of happiness to the depths of grief.

Gary Earl Holtzclaw was a great guy, a loyal friend, a good son, a loving husband and a dedicated Marine. On the anniversary of Gary’s death, Manny G., a fellow Vietnam veteran, visited The Wall and left this note addressed to him. “Greater love hath no man than this; that he lay down his life for his friends. John 15:13. You are my friend, always remembered, never forgotten. May God bless you for your sacrifice.”

His roommate at The Basic School, William Congleton remembers Gary as his mentor. He had a stone engraved in Gary’s memory and it is on display in the Essex Junction, Vermont, Memorial Park. The inscription reads, “Gary, thanks for watching over me. I miss you. WGC, USMC.”

Ian Campbell, in the words of William Shakespeare, wrote this message to Gary and posted it at the Vietnam Veterans Memorial.

He which hath no stomach to this fight, let him depart.

But we in it shall be remembered; we few, we happy few, we band of brothers. For he today that sheds his blood with me, shall always be my brother.

Rest In Peace Brave Marine, You Have Not Been Forgotten.

Gary and I were boyhood friends growing up in the mountainous town of Corbin Kentucky. We rode bikes together, played ball together, fished hiked and most all other things boys do. I never really got to tell him how much I cherished our friendship and growing up years. Nor, did I ever get to tell him goodbye. At this time in my life it is pretty late to say goodbye, but I will say until we meet again. BILL SHOTWELL, 11/2/01

I can still vividly remember Gary and I pedaling our bicycles around Corbin as I accompanied him on his newspaper route after school. I still smile as I recall jokingly calling him "Einstein" for being the brainy "scientist" of our class.

I was in the Army in Germany when I received the devastating news about Gary through a newspaper clipping from my Mom. I returned home in October that same year. Exactly forty years have passed since Gary and I went our separate ways, but I still think of him.

Gary, you're a hero. I'm always proud of you and for your ultimate sacrifice in the service of our country. You're always in my thoughts and prayers. I miss you, man!

The President of the United States of America takes pride in presenting the Silver Star (Posthumously) to First Lieutenant Gary E. Holtzclaw (MCSN: 0-101637), United States Marine Corps, for conspicuous gallantry and intrepidity in action while serving as Commanding Officer of Company F, Second Battalion, Fourth Marines, THIRD Marine Division (Rein.), FMF, in connection with operations against the enemy in the Republic of Vietnam. On 10 April 1969, during Operation PURPLE MARTIN, Company F, while conducting a search and destroy operation, came under intense fire from a well-entrenched, heavily fortified North Vietnamese Army company and sustained several casualties. Without hesitation, First Lieutenant Holtzclaw advanced to the point of heaviest contact and began to direct the fire of his men against the enemy. During the ensuing fire fight, he repeatedly disregarded his own safety as he moved from one position to another, encouraging and directing his men in coordinating supporting fire on hostile targets. When the enemy attack subsided, First Lieutenant Holtzclaw supervised evacuation of casualties, reorganized his company, and continued to pursue the enemy. His unflagging determination and bold fighting spirit inspired all who observed him and contributed immeasurably to the accomplishment of his unit's mission. By his extraordinary courage, superb leadership and selfless devotion to duty, First Lieutenant Holtzclaw upheld the highest traditions of the Marine Corps and of the United States Naval Service.

Gary is among those names on the Vietnam Veterans Memorial in Washington, D.C. As his loss was not due directly to hostile action, though, he does not appear in the Vietnam War section of the Killed In Action panel in Memorial Hall.

Alfred Mcglothlin '67 and Kenneth Norton '67 were also in 9th Company.

Gary is one of 34 members of the Class of 1967 on Virtual Memorial Hall.

The "category" links below lead to lists of related Honorees; use them to explore further the service and sacrifice of the alumni in Memorial Hall.
Retrieved from "http://usnamemorialhall.org/index.php?title=GARY_E._HOLTZCLAW,_1LT,_USMC&oldid=132899"
Categories: