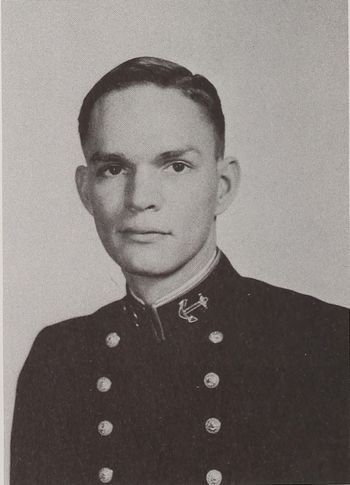 Calling Birmingham, Alabama, his home Lynn came to the "hallowed" halls on the Severn after two years in the regular Navy. A potentially fine distance runner Lynn gave up the life of a harrier and concentrated on his studies. Always willing to help a classmate; either morally or academically, "Glu's" tremendous drive and perseverance to succeed under the most unsurmountable conditions won him the respect and admiration of his classmates. His sense of fair play and great sensitivity for the feeling of others will aid him greatly in his dealings with other people as well as his men. A highly successful career seems well within sight and a welcome addition indeed to the wings of the Navy will be Lynn McGlothlin.

He was also a member of the 2nd Battalion staff (winter).

Calling Birmingham, Alabama, his home Lynn came to the "hallowed" halls on the Severn after two years in the regular Navy. A potentially fine distance runner Lynn gave up the life of a harrier and concentrated on his studies. Always willing to help a classmate; either morally or academically, "Glu's" tremendous drive and perseverance to succeed under the most unsurmountable conditions won him the respect and admiration of his classmates. His sense of fair play and great sensitivity for the feeling of others will aid him greatly in his dealings with other people as well as his men. A highly successful career seems well within sight and a welcome addition indeed to the wings of the Navy will be Lynn McGlothlin.

He was also a member of the 2nd Battalion staff (winter). 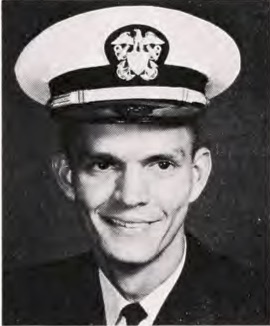 From the September-October 1970 issue of Shipmate.

From the September-October 1970 issue of Shipmate:

Lt. Alfred Lynn McGlothlin, USN, died 20 April as the result of a helicopter crash in Meridian, Ms. He was co-pilot of the fateful aircraft that crashed minutes after takeoff due to engine failure. He was buried in Elmwood Cemetery, Birmingham, Al.

Lt. McGlothlin was born in Birmingham. Prior to entering USNA he attended Marion Institute, Marion, Al. He graduated from the Naval Academy in 1967.

After graduation he was assigned duty in Pensacola where he received his wings the following year. At the time of his death he had accumulated over 700 flight hours. He was to have reported for duty in Vietnam in August.

Three others aboard were also lost; there is a plaque memorializing all four men in the Branch Health Clinic, NAS Meridian. He was a part of the Naval Station's search and rescue unit.

He is buried in Alabama. 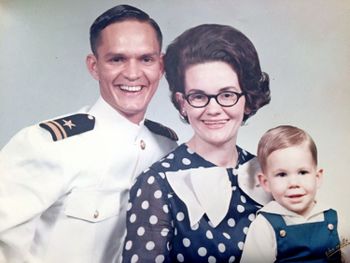 From the Class of 1967 50th Reunion Yearbook. Photo courtesy of William Belden '67

He had a big heart and a generous nature. Tall and lanky with a slow, easy drawl and a fondness for southern fried chicken, Alfred Lynn McGlothlin, “Glu,” was the quintessential Southern gentleman. Older than most, Lynn had a focus and steadiness that were rare among his peers. His years in the “real” Navy had given him a maturity that most of his classmates lacked. Viewed as serious and quiet, Lynn’s demeanor was the outward manifestation of his singleness of purpose. He knew who he was and what he was about; what he wanted and where he was headed. Lynn’s future was a careful creation; the result of years of dedication and hard work.

Lynn and Pete Young were the “odd couple” of the Ninth Company. Two more different Mids could not be found; they were Mutt and Jeff. At the end of their Youngster year, the rising Firsties of the company Class of ’65 called the youngsters together to select roommates for the coming year. This was a new experience for most; moving up to the privilege of two man rooms after two years of tripling up. Pete had spent most of the previous year with Norm Hapke and Bill Burns (listening to nothing but show tunes or Frank Sinatra), but a brave new world beckoned. Several of the company mates had already paired off, but as the list was being built, neither Lynn nor Pete apparently paid much attention. Finally, as the choices were made and the room cleared out, Lynn looked over at Pete and said, “Well, Young, are you up for it?” And the next two years of their domestic life was determined.

Lynn had a big heart. In fact, he really had... a big heart. Not just figuratively, but physically as well. One of Pete’s strongest memories of “Glu” was the agony he went through in the spring of their First Class year as he waited for the results of a medical board decision, on an apparent anomaly in his heartbeat. As everyone was going through their pre-commissioning physical exams, Lynn was up against the most rigorous of these the aviation physical requirements for potential pilots. Throughout the two years that he and Pete were roommates, Lynn talked about nothing else but Naval Aviation as his career choice. Anything else was unthinkable. Lynn came back from Sick Bay with a dark cloud on his face something about an irregular heartbeat. He was quiet and reserved for the next few days more so than usual (which is saying something). Finally, the word came back that he was “good to go” for Pensacola. The “anomaly” in his heartbeat was attributed to his “unusually large heart muscle” the result of a youth spent in long distance running. When he was told that he was cleared for Flight School, it was like a dark cloud had lifted and he was walking on air.

Rooming together is a lot like being married... full of compromises and accommodation. Lynn and Pete were certainly not drawn together by common interests or backgrounds. Their personalities were very different, to say nothing of their physical characteristics. But despite their many differences, Pete remembers them finding a level of comfort and communication that served them both well for two long years. Without any overt effort, Lynn taught Pete how to live in close quarters with someone else and how to learn from the example of someone who had goals and stability in his life. There was also the element of the “crew concept” that became essential to Pete’s later career in aviation the confidence that grows out of trust in the strengths and qualities of your roommates. Part of this easy relationship was the occasional flash of wry humor the ever present chance that Pete would turn around to find the business end of their dust mop coming at him, with Lynn on the other end, saying “Kiss Grandpa”…

While his goal of flying was Lynn’s constant source of motivation and drive to succeed, the rock solid center of Lynn’s life and universe was Linda. She was the anchor that kept him centered throughout his time at the Academy. It was in this way too, that Lynn stood out among his classmates. In a time when most Mids bounced from girlfriend to girlfriend like butterflies in heat, Lynn’s unwavering devotion to Linda was a wonder to them all. When Linda managed to find work at the Naval Station and an apartment right outside the Maryland Avenue Gate, his classmates marveled at his great, good fortune. As with most aspects of Lynn’s life, he arrived at the Academy with the elements of a lifestyle that the others could only hope for after graduation.

Lynn graduated from the Naval Academy on June 7, 1967 and later that day, in the downstairs Academy Chapel, married his childhood sweetheart, Linda. Soon after, he reported to flight training in Pensacola and the couple provided a “home away from home” to their bachelor, flight school classmates. Lynn’s dinner table was truly as big as his heart. John Clevenger and Leroy Farr remember Sunday afternoons in Pensacola filled with camaraderie and Linda’s southern fried chicken.

The path to becoming a Naval Aviator was never easy for Lynn. Right at the beginning, he almost washed out of the flight program. During his flight physical, he was told that he didn’t weigh enough for his height and he was given two weeks to gain weight. In addition to gorging himself at every meal, John Clevenger remembers Lynn munching on bags of bananas during Ground School classes throughout the day. At his next weigh-in, he had gained the required weight and was able to continue on in the program. Lynn struggled with some of the aspects of Ground School, but he persevered and “hit the books” at night and during the weekends. Nothing was going to keep him from achieving his dream.

Lynn’s first duty station was the Naval Air Station, Meridian, Mississippi where he served as a station Search and Rescue helicopter pilot. By April of 1970, Lynn was in receipt of orders to Vietnam and was preparing to report for pre-deployment training. His relief had just checked aboard and was going through familiarization training. Early on April 20th, there was a schedule change and Lynn, who was not on the flight schedule, volunteered to fly the hop. For the familiarization flight, Lynn was flying in the co-pilot’s seat. Almost immediately after taking off, the helicopter experienced engine failure and crashed off the end of the runway in a ball of fire. Both pilots were killed and there was little left to recover from the wreckage.

On that morning, Linda was still in bed when Lynn kissed her goodbye and told her that he would be back soon. A couple of hours later, a Navy sedan pulled up in front of the house and as Linda heard the slamming of car doors, she looked out the window. As she watched Lynn’s CO, his wife and the chaplain coming up the walk, she knew in an instant what had happened. The love of her life, the father of her son, Michael Shawn and unborn daughter, Shannon, her beloved Lynn was gone.

In the three years following graduation, the twenty-four surviving members of the Ninth Company had been scattered around the globe. Only Leroy Farr was able to attend the funeral in Lynn’s hometown of Birmingham, Alabama. For the rest of the Company, the news came to them as had other similar messages that told of classmates and friends whom they would never see again. As with them, they were once again reminded-

He will not grow old, as we that are left grow old. Age will not weary him, or the years condemn.
At the going down of the sun, and in the morning,
We will remember him.

We miss you “Glu”

Gary Holtzclaw '67 and Kenneth Norton '67 were also in 9th Company.

Alfred is one of 34 members of the Class of 1967 on Virtual Memorial Hall.

Retrieved from "http://usnamemorialhall.org/index.php?title=ALFRED_L._MCGLOTHLIN,_LT,_USN&oldid=132904"
Categories:
This page was last modified at 14:05 on 7 October 2020.
About USNA Virtual Memorial Hall