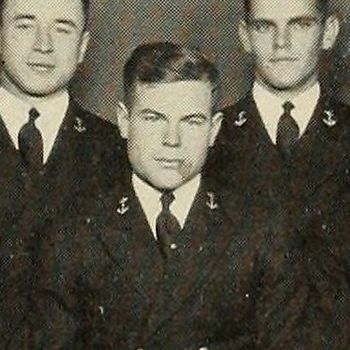 Philip Van Horn Weems, Jr., was lost early in the morning of June 29, 1943, when he died of injuries received in an automobile accident on Helensville Highway at Henderson's Corner, Kumeu, New Zealand. His death was in the line of duty, not due to his own misconduct. (Information from his casualty card, obtained by Kathy Franz.)

He was commanding officer of C Battery, 3rd Special Weapons Battalion, 9th Marines. (The battalion, a part of the 3rd Marine Division, was detached from that regiment shortly before he died.)

"You would like to have been with us for the last week, I'm sure. Remember the time you made the rice butting when you, B [note: younger brother George "Bee" Weems] and I went camping in California? Some general in our outfit must have been spying on us, for out latest training practically forced me to imitate your recipe. We were sent off on a three-day, 40 mile hike with heavy packs, half a sock of rice, and half the same of raisins. That was what we had to live on for the trip with two slices of bacon each meal for a teaser. If they will give me a few fish heads to practice on I should make an ideal Jap prisoner! My feet are full of blisters, needless to say. I tried to convince the Col. that my unit should make the hike in vehicles but the trick to keep me from walking didn't go over so well.

"As a unit commander, I believe I'm getting along fairly well. I'm too easy on the men but I have a tough exec to even matters up. All of my J.O.'s are very new so I have to be the "voice of experience." It gives me real pleasure to try and train the J.O.'s to do the work without orders from me. One more year with them and I wouldn't have to do any work except to sign my name all day on the too numerous paper work we have to turn in. My unit has an excellent record to date so we are under pressure to keep it that way. Had an inspection by the Regimental C.O. the other day and with much luck and a few tricks of the trade we "turned out the best unit inspected so far in this country." One of the officers had listed all the Col.'s "pet hates" and what he had noticed wrong with previous units in his inspection tour. By specializing on the things most likely to be noticed we covered ourselves with glory. Naturally, I gave all hands (including myself) the day off."

Philip's girlfriend was Anne Frances Whiting, whose notes and papers are a part of the collection of the F. Brooke Whiting House & Museum in Cumberland, Maryland. The collection is described partly thus: "Another important aspect of the collection involves correspondence which Anne received during World War II from her brother, F. Brooke Whiting II, who volunteered with the American Field Service and drove an ambulance in Africa and Italy, and her boyfriend Philip Van Horn Weems, Jr., a Captain of the United States Marine Corp and son of U.S. Naval Captain P. V. H. Weems, the twentieth-century navigation pioneer and genius. Philip Jr. was killed during the war while stationed in the South Pacific."

Prior to locating the casualty card, there was quite a bit of uncertainty regarding Philip's loss. Several reports exist of him being killed in action. Dates of his loss varied from 28 June to 1 July, or sometimes simply "before 1 July." His grand niece relayed the family story of his death in Guam — an impossibility, since the invasion of that island didn't occur for over a year after his death.

The "category" links below lead to lists of related Honorees; use them to explore further the service and sacrifice of the alumni in Memorial Hall.
Retrieved from "http://usnamemorialhall.org/index.php?title=PHILIP_V._WEEMS,_JR.,_MAJ,_USMCR&oldid=130875"
Categories:
Hidden category: